Mercedes hopes its decision to lean towards a drier set-up for its W12 Formula 1 car will still pay off despite forecast rain for the Belgian Grand Prix.

Like most teams, Mercedes opted to run different wing levels on its cars during practice on Friday to try to find the right compromise between straightline speed and downforce for the long Spa circuit.

With rain falling in the lead-up to qualifying on Saturday afternoon, teams faced a difficult call on whether to lean more towards the conditions or to still plan for a dry race on Sunday.

Mercedes retained its skinnier rear wing for qualifying to ensure Lewis Hamilton and Valtteri Bottas still had good straightline speed, but did fit an additional gurney in reaction to the rain.

Hamilton qualified third on the grid behind F1 title rival Max Verstappen and Williams driver George Russell, but Bottas struggled to eighth place, and will drop further back because of a grid penalty.

Hamilton acknowledged after qualifying that it would be "tricky" for Mercedes in the race if the conditions were the same as in qualifying given the set-up it had opted to run.

"There is this balance of straightline speed versus that mid-section downforce," Hamilton said.

"I think we tried to strike the best balance possible. Maybe it's not the best for today, but we will see tomorrow exactly how good it is.

"Tomorrow is another day, and hopefully we have better weather." 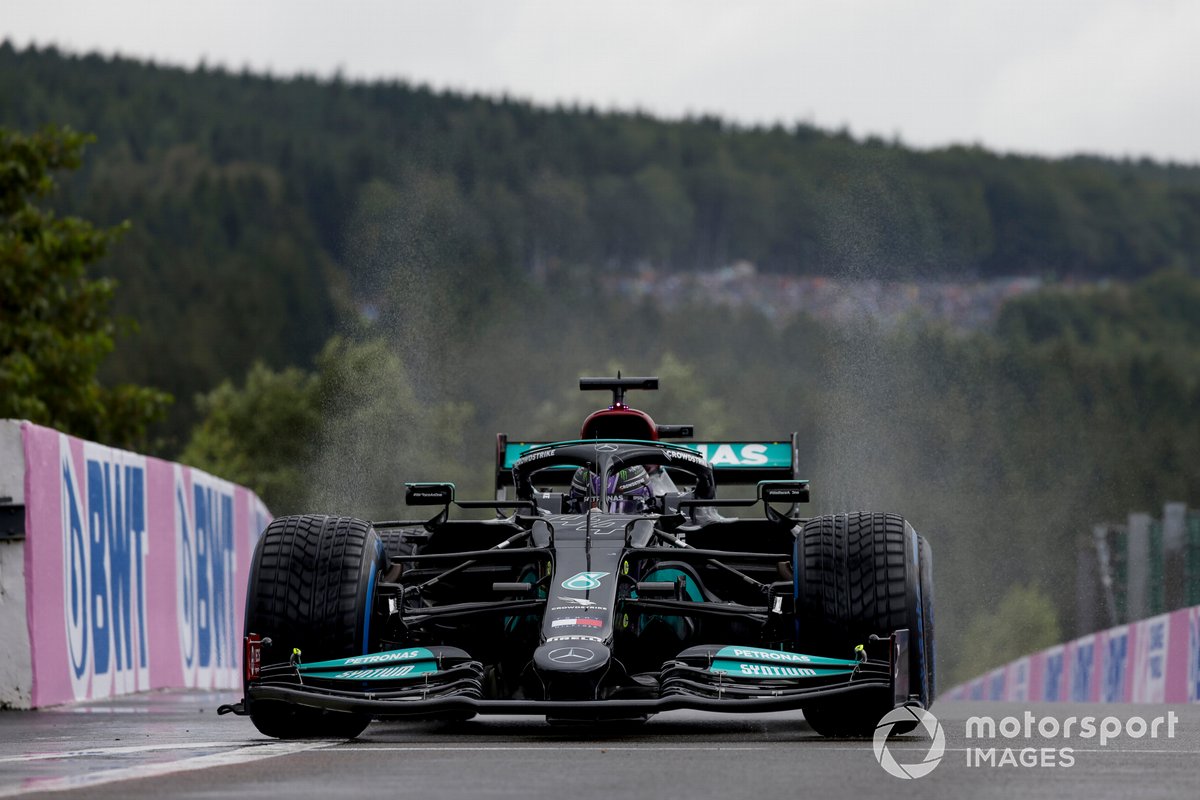 Rain has continued to fall throughout Sunday morning at Spa, with the F3 race being forced to run a number of laps behind the safety car before it could get underway due to the conditions. The rain is expected to continue on and off throughout the day.

Mercedes F1 team boss Toto Wolff explained that the set-up on both W12 cars was leaning more toward dry conditions to maximise straightline speed, hurting its chances in the wet qualifying session.

"I think we have a really quick race car," Wolff said after qualifying.

"If, and that's if, the weather conditions stay dry, or nearly dry, we have good straightline speed.

"We've opted for a set-up more for a drier set-up in order to maximise on the straightline speed, and that bit us today a little bit."

Bottas is expected to start the race from 12th on the grid. While his penalty leaves him 13th, it is understood that Lando Norris will be forced into a gearbox change after his qualifying crash that will see him drop further back.

"He has a good car underneath tomorrow," Wolff said of Bottas.

"Depending on the weather, I think he can score some solid points, and come back in the top four."