The Mercedes Formula 1 team has explained the solutions it introduces to deal with the unique demands of the Monaco Grand Prix, including a special front suspension

While Mercedes has swept to the last four F1 drivers' and constructors' titles, it has been vulnerable in Monaco - where it was comfortably beaten by Ferrari last year and was fortunate not to lose out to Red Bull in 2016.

Monaco carries bespoke considerations such as how aggressive the ride height can be to deal with the street circuit's bumps and how to get the most out of the engine at lower rev ranges - which is another quirk of the classic track.

F1 teams also need to consider how to cope with the added steering lock required to negotiate the Loews hairpin, the tightest turn on the calendar, and the longer wheelbase of Mercedes' F1 challenger makes that task particularly important.

Mercedes utilises a special front suspension to deal with what it claims is 40% more lock applied at the famous Monaco hairpin than that of Montreal, which is next up on the calendar.

The team's Monaco-specific setting produces a bigger road wheel angle, which reduces the number of turns of the steering wheel required to negotiate the 50km/h (31mph) corner and does not limit the driver to one line to get round.

Mercedes has also detailed how the downforce benefits of its long-wheelbase W09 gives it an overall advantage, despite theoretically being less competitive on the slower twists and turns of Monte Carlo where it gets "the least benefit".

It estimates that if the wheelbase was the only differentiator between two cars than a shorter wheelbase would be faster by "less than a tenth", but this is not as significant as the loss in downforce compared to a long-wheelbase car in reality.

This is why in Barcelona testing last week Mercedes trialled its favoured solution of 'opening' the top of the engine cover. 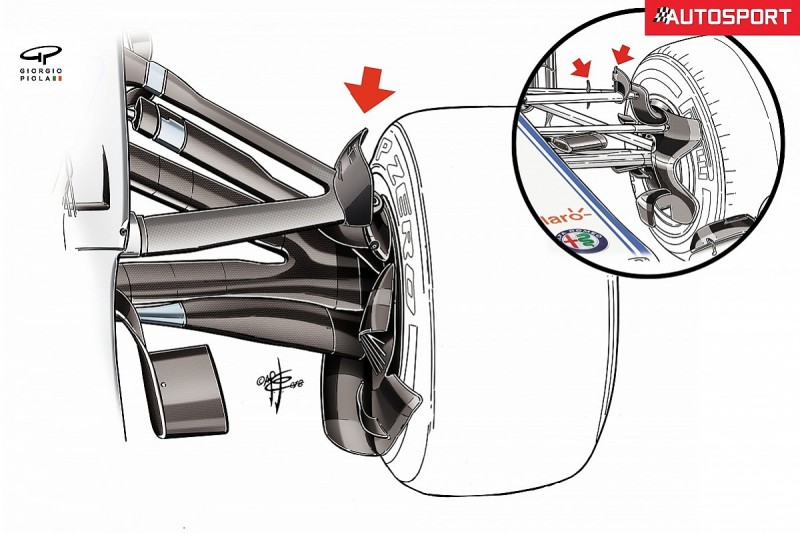 Mercedes has already made subtle tweaks to its car this season in a bid to extract more from a package that proved difficult before a dominant victory in Spain.

It adopted a Sauber-like front suspension fin at Barcelona, combining the raised upper wishbone pioneered by Mercedes in 2017 with a large winglet to guide airflow around the upper corner of the tyre and reduce the turbulence this would ordinarily create.

While Monaco will be the highest-downforce requirement of the season, the previous races in Azerbaijan and Spain have provided clear examples of the solutions employed for different downforce levels. 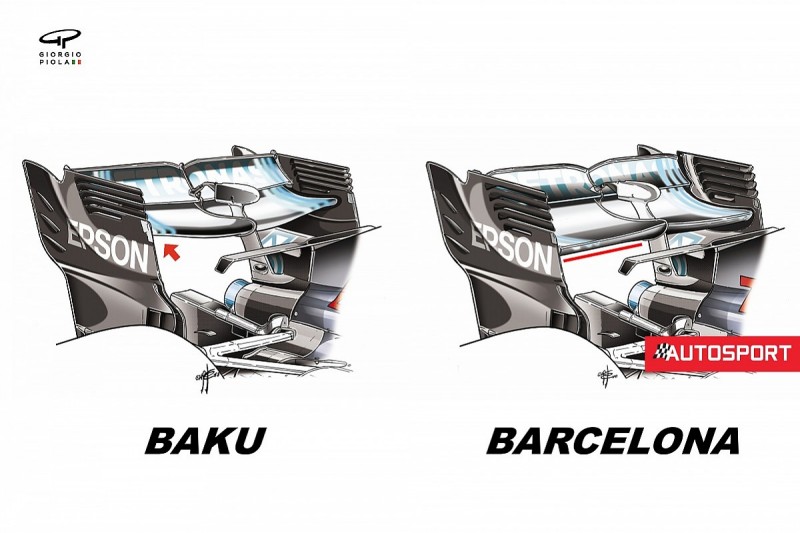 Mercedes swapped a Baku-spec rear wing that swept upwards at the outer edges for a Barcelona version with a straight leading edge.

You can also see how the length of the chord on the main plane and flag also changes, with the Barcelona spec creating more downforce outboard.

Monaco has always required more steering lock than any other circuit, and the road wheel angle you need just for the Loews hairpin is also helpful if you have to try to pass a car through some of the other parts of the track.

I suppose the main question is why not design the car with 20 degrees of steering angle to use at all circuits? The answer is fairly simple. The suspension components would be either heavier or less stiff, so it's a little compromise you don't want to make if you don't need to.

Mercedes says it has the longest wheelbase car in the pitlane, not as relatively extreme as last year but still longer than all the rest. So, the question is will this give the team more problems in Monaco?

Monaco is one circuit out of 21 in 2018. Again, it's that word 'compromise'. The car will be a little lazier, with potentially a little more understeer than a shorter wheelbase car.

A longer car produces more downforce, which is correct because the low pressure under the car has more surface area to work on.

To work out a figure for that extra downforce is fairly difficult, but if we make a couple of assumptions we can get an idea of why Mercedes persists with the concept.

If the other cars' wheelbase is 3200mm and Mercedes' is 3400mm, and the underfloor surface is 50% of the wheelbase, that would give us an extra 100mm of underfloor length.

With the average pole speed in Monaco last year 166km/h (103mph), and considering that downforce is produced at the square of the car's speed, that means an increase in downforce of 9.2kg.

On normal circuits, where the average speed is higher, the benefit is even greater.