Honda's third year back in F1 got off to a torrid start on Monday, with Fernando Alonso essentially missing the morning due to an oil leak, and only completing 29 laps for the day after an engine change.

Vandoorne faired slightly better on Tuesday when he took over McLaren's MCL32, completing 40 laps, but his day also included an engine change.

That gives McLaren a combined today of 69 laps across the two days, a far cry from the 362 Mercedes has managed.

With two days of running left this week and four next week before the season opener in Australia next month, Vandoorne concedes the impact of the lost running has been significant.

"Of course it's not the best situation," he said.

"Everyone hoped we would have been able to do more laps yesterday and today, but it is what it is.

"Every lap I get is more experience. I did one grand prix in Bahrain, so every day I get is important.

"Fernando did 29 laps yesterday, I did 40. We didn't have a single proper run.

"There's still a lot of checks to do. Once we have a day without issues with a full programme we'll have a better view on the performance."

The 24-year-old, replacing Jenson Button in McLaren's line-up, says the team's programme so far has consisted of "mainly reliability, system checks, aero scans - all the checks you usually do at the beginning of a test."

Honda suspects the issues that restricted Alonso on Monday are linked to its oil tank design but is yet to investigate Vandoorne's Tuesday's problems. 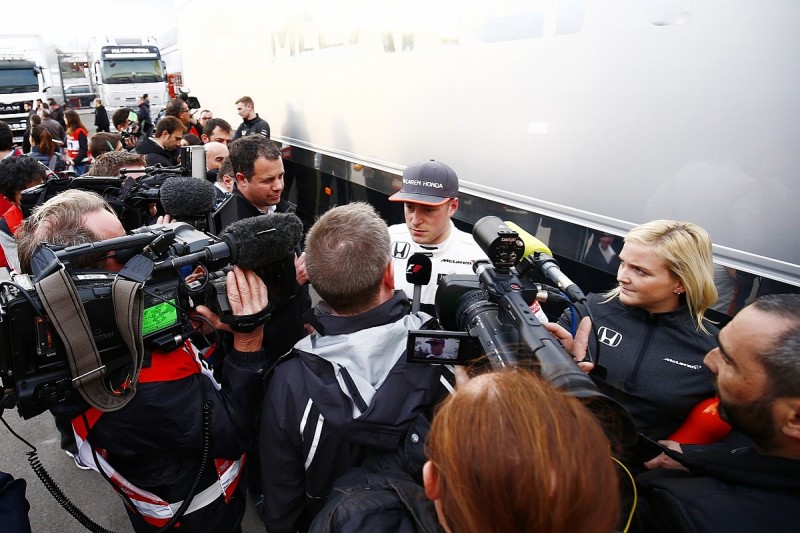 Vandoorne stopped at pit entry after his second installation lap less than 10 minutes into the day, deciding to shut the car down himself as a precautionary measure.

"Unfortunately we had a loss of engine power in the morning after a couple of laps," he said.

"We're still investigate what the issues are exactly. Obviously I hoped to do more laps, which we didn't achieve today, so the last two days were difficult for us.

"Tomorrow and the day after tomorrow are going to be important for us. We're going to try and make the most of the situation.

"It's still very early days but the first feeling was quite positive when I got into the car. I was pushing, being able to drive the car, so that was positive.

"We had two difficult days, not a lot of running and a lot of background tests that went on.

"We need a proper, full day with a lot of laps to finally understand what we have in terms of pace."

2017 Formula 1 cars on target to be fastest ever