The Woking-based outfit trialled the new design on Carlos Sainz Jr's car on Friday in Mugello and has brought a further iteration to Russia.

The revised design, which is similar to the Mercedes concept, has had to pass an FIA crash test and the team will make a decision after practice on whether it will stay on the car for the remainder of the weekend.

"We will continue today with our experimental nosebox," said team principal Andreas Seidl. "We will start running it on Lando's car in the morning, so some tests, and some back-to-back tests as well.

"You will see on the car we will have the next evolution. We have to collect data again during Friday before we decide how we go on with this nosebox.

"The target obviously when you bring a development is that hopefully it works as expected, and to run it as soon as possible for the entire weekend. It's obviously a logistical challenge at the moment to produce enough parts to run it all weekend.

"We simply have to take it step by step at the moment, and first evaluate the performance today, and then make a decision tonight if we carry it forward into the weekend. We'll let you know tomorrow morning what the outcome is." 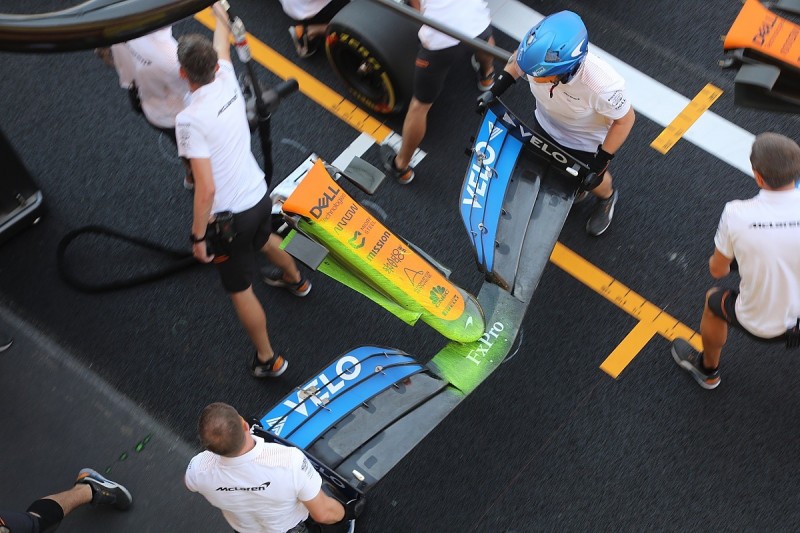 Seidl also confirmed that the Tuscan GP running indicated that the new specification delivered what it promised.

"We have seen in Mugello the nose worked as expected," said Seidl. "At the same time as you will see today it's something which is still in development, so we'll bring the next evolution of the entire front today - you will also see an update on the front wing itself.

"That's what we'll run today to see if we can confirm again the correlation we have seen in the windtunnel, and of course we're expecting a step in terms of performance. But we need to evaluate first on track today."

Asked to quantify the benefits he said: "Obviously we have certain expectations from simulations that we did, from running it in the simulator.

"I'm not keen to quote any number, as always the only thing that counts is the lap time on track, so let's see what it does here on track. Once we have firm numbers we might be a bit more brave to communicate."

Seidl also confirmed that Norris's regular race engineer Will Joseph will be absent from the Russian GP and also possibly the next event at the Nurburgring as he is on paternity leave, with Mark Temple standing in for him.