Nikita Mazepin described wet conditions as like “driving blind” during the Formula 1 Turkish Grand Prix and will apologise to Lewis Hamilton for almost causing a crash while being lapped.

The Haas driver endured the worst of the spray thrown into the air at the back of the F1 pack during the wet race at the Istanbul Park track, a challenge he had to contend with both ahead of him and behind while being lapped later in the race.

Mazepin felt the spray was even worse at the Istanbul track due to the dirt flicked up from the track surface which made visibility harder when mixed with the pre-race rain shower and resulting spray.

On lap 28 Mazepin was about to be lapped by Hamilton but stayed on the racing line through the fast sweeping Turn 11, which almost caused the pair to clash, and forced Hamilton to take avoiding action.

FIA race director Michael Masi looked at the near-clash between Mazepin and Hamilton, but ultimately concluded that no investigation was necessary.

Mazepin has said he will apologise to the Mercedes driver for the incident, and wasn’t investigated by the stewards for ignoring blue flags, as he blamed the dirty spray and lack of information from his Haas team about Hamilton behind him.

“First of all, extremely sorry to Lewis. I've been complaining to the team that I can't see anything with the mirrors, and I do need proper guidance in my ears on where the other cars are, because the spray – and Turkey isn't exactly the cleanest spray that we have, so it flies and dries out – so I was driving blind,” Mazepin said, having finished the race in 20th place.

“When you get so many cars overtaking you lapping you actually not once, but even twice, it was just a disaster. I'm happy that we managed to get away, but I'll see Lewis and I'll apologise to him.” 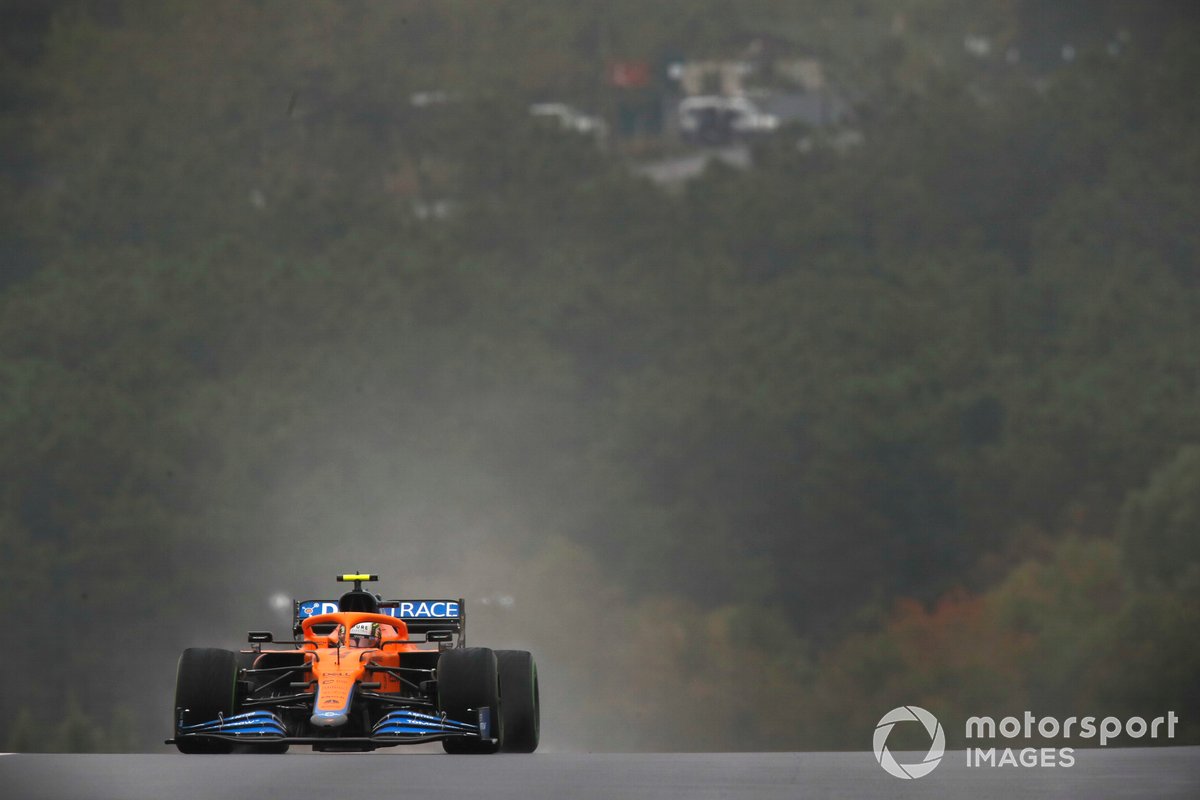 Lando Norris also felt the spray was worse at the Turkish track compared to other circuits due to the dirt and residue from the track surface mixing with the water spray.

“The laps to the grid I basically couldn't see a thing,” Norris said. “I was quite scared actually how bad it was and even on the first lap, but I think the first lap like I managed to get a gap and control it very well from then on.

“I think it's because the water sits on the surface quite a bit. And like it obviously didn't dry so there's always that bit of water and I think it's not like down in the cracks of it.

“It's terrible at other tracks, probably every other track you go to, it's just stayed bad for a little bit longer [here]. It was more like an oily water rather than just water so it became like a bit more blurry and stuff as well as much as water going into the visor.”

Tsunoda partly blamed the dirty spray as a factor in his race-wrecking spin, as he couldn’t clearly see in his mirrors and thought he had a car behind him which forced him to push harder and caused him to spin.

“I just had a spin and tried to go faster. There was not [a clear] mirror, I couldn't see anything because of dirt and dust,” he explained.

“I just couldn't watch, I thought there's a car right behind me so I just had to push and I spun but anyway the spin ruined my whole race so it's a shame. We were able to score points today so it is just a shame.”