Verstappen tipped now-Ferrari driver Vettel into a spin in the closing stages of last weekend's Chinese Grand Prix, one week after clashing with the Mercedes of Lewis Hamilton in Bahrain.

Vettel stepped up to the Red Bull senior team in 2009 and went on to win four F1 titles, but his first championship-winning season featured some high-profile errors.

He wiped out team-mate Mark Webber in Turkey and McLaren's Jenson Button in Belgium in 2010 (pictured above), and Horner said Verstappen - now in his second full year with the Red Bull senior team - was going through the same learning process.

"I remember when we had Sebastian at a similar stage in his career, it wasn't uncommon that he also made some mistakes.

"I think he'd [Max] have learned a lot. He will put that to good use in the future, in the coming races.

"His talent is extremely obvious, his bravery and racing instinct is not in doubt.

"Obviously he was too impatient, and he will for sure learn from that, I've got absolutely no doubt."

Verstappen and Hamilton disagreed over their Bahrain collision but in China Verstappen was swift to accept blame and apologise to Vettel, who praised the 20-year-old's approach.

"Just talking with him after the race, he's put his hand up, he apologised to Sebastian, he did that immediately as they got out of their cars," said Horner.

"I spoke to Sebastian after the race as well and he appreciated that Max apologised to him." 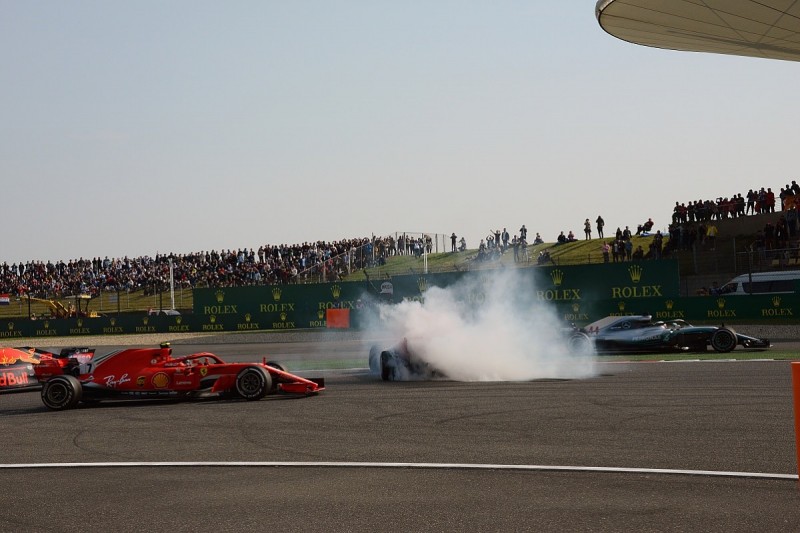 Verstappen's team-mate Daniel Ricciardo won the Chinese GP after a flawless rise from sixth to first after Red Bull pitted both its drivers for soft tyres under the safety car.

Ricciardo was behind Verstappen at that point and only got ahead when Verstappen went off-track trying to pass Hamilton around the outside into the fast Turn 7 left-hander.

"Max had a grip advantage, he got a better drive, he found himself on the outside there and decided to hang it out with Lewis, who was never going to concede in that corner easily," said Horner.

"He [Hamilton] was more generous with Daniel in the braking area, but Daniel picked his time differently to where Max decided to have a go."

Horner said Ricciardo was a good benchmark for Verstappen once the Dutchman gains more experience.

"He's a very rounded driver now, Daniel," said Horner. "He's absolutely at the top of his game and I think he has been for the last couple of years.

"He's hit that balance of experience and pace. He's one of the best overtakers in the business, and his judgement is impeccable.

"I really feel that he's just at a different part of his career to where Max is at the moment - obviously he's still very young and fresh and going through that experience."

Why the Verstappen bubble has finally burst