Red Bull team principal Christian Horner revealed Verstappen changed his approach to the fast corners at the end of the lap once it became clear he needed to look after his tyres.

"It [the blistering] wasn't predicted coming into the race, but it is hot today and the load in these last two right corners, it is massive the amount of energy these tyres have to take up around there," Horner told Sky Sports F1.

"So that is where Max was really cute today. He backed off through those right handers and made his time in the other parts of the circuit. A really, really mature drive."

Horner said that Verstappen did such a good job that the critical left rear tyre was operating at a cooler temperature than the right.

"Unbelievable," added Horner. "He was keeping the rear left cooler than the rear right, and the rear left here is the one that takes all the load.

"He was constantly asking for information and managing those tyres and that is why they didn't blister up. A very, very mature drive for him." 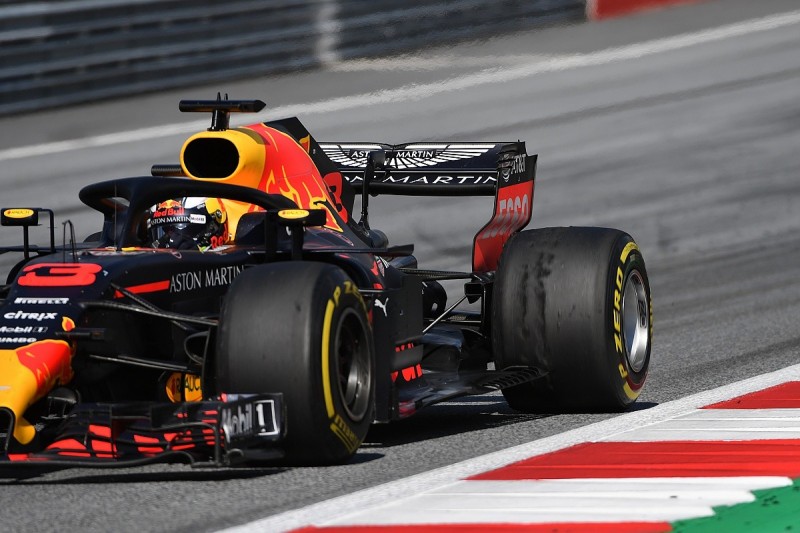 Ricciardo had to pit from second place when his left rear tyre blistered in the middle of the race.

"It was going good and all of a sudden it quickly fell apart. Max's race was good and Kimi did the fastest lap at the end so if it worked, it worked. But for Lewis and myself it fell apart very quickly.

"I don't really have an explanation for that right now."

Horner also paid tribute to his team for pulling off a high-pressure double stacked stop during the virtual safety car period that was called when Valtteri Bottas retired.

Asked whether he was surprised that Mercedes did not stop then race leader Hamilton, Horner said: "I was surprised, it was a pretty much a given.

"But you have to have confidence in your boys to nail a double stop with the proximity that the drivers were in there.

"We have got the best guys in the pitlane without any shadow of a doubt. It was a ballsy call but it was the right thing to do and it paid dividends."

Ricciardo ultimately retired from fourth in the race with an exhaust problem.

"We started to see an exhaust leak where temps were going through the roof, but we thought we will keep going in the hope we can try do things to cool it down," Horner explained. "But that is ultimately what has caused his failure."