Verstappen headed the Ferraris of Kimi Raikkonen and Sebastian Vettel, who stole the championship lead from Lewis Hamilton by one point after Mercedes turned a one-two in qualifying into a double-DNF.

Poleman Valtteri Bottas retired with a gearbox problem while a strategy error under the ensuing virtual safety car ruined Lewis Hamilton's race and a loss of fuel pressure consigned him to a late retirement.

Hamilton and Raikkonen jumped Bottas on the run to Turn 1, with the leaders three-abreast, before Raikkonen tucked into Hamilton's slipstream and attacked into Turn 3 but locked up and ran wide.

That allowed Verstappen to challenge him on the run out of the corner but the Dutchman was rebuffed aggressively and Bottas was able to repass both on the outside of Turn 4.

Verstappen got inside Raikkonen two corners later and a slight nudge on the Finn's left-rear wheel pushed him wide and allowed the Red Bull driver to sneak through.

Bottas offered no threat to Hamilton before slowing on lap 14 of 71 and retiring on the escape road at Turn 4 with a loss of hydraulic pressure.

That triggered a virtual safety car under which the frontrunners all stopped except for Hamilton, a mistake that Mercedes chief strategist James Vowles came on the radio to apologise for.

Verstappen rejoined from his pitstop 13 seconds behind Hamilton, who ran 10 laps without being able to eke out the gap and eventually stopped.

That dropped him to fourth, handing Verstappen the lead, but Hamilton's misery continued a few laps later when Vettel forced his way past on the grass on the way up to Turn 3 and aggressively ran Hamilton wide on the entry to the corner. 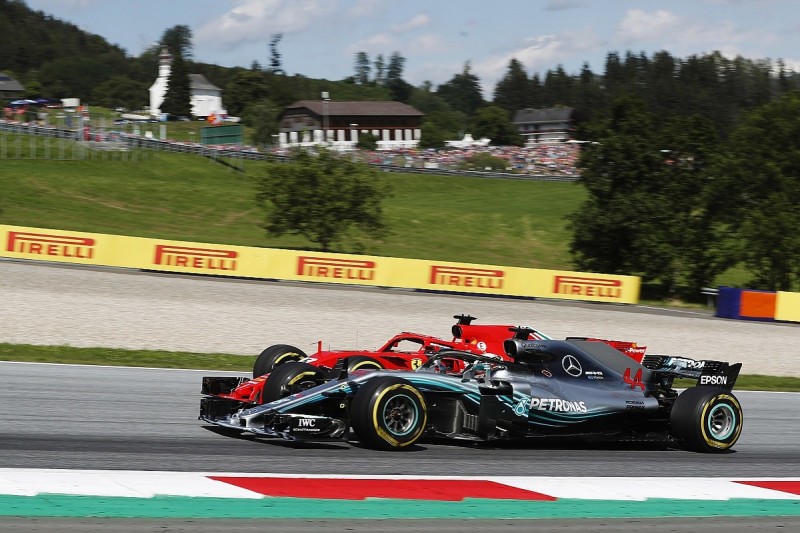 Hamilton was gifted a place back just after mid-distance when Daniel Ricciardo had to pit to change tyres after battling a blistering left-rear.

The remaining Mercedes gave chase to Vettel after receiving another apology from Vowles over the radio but then had to make its own forced stop for the same reason as Ricciardo with 19 laps to go.

Hamilton's race lasted just another dozen laps before a loss of fuel pressure forced him off the road at Turn 3 and into retirement on the left-hand side of the circuit on the run down to Turn 4.

That ended a run off 33 consecutive races in the points for Hamilton, whose last retirement was his spectacular exit from the 2016 Malaysian GP with an engine failure.

His dramatic race gave the top three an easy run to the podium, with Raikkonen closing to two seconds of Verstappen by the end but not troubling the 20-year-old and likewise being unchallenged by Vettel - who had started sixth after a grid penalty then fell to eighth running wide on lap one.

Ricciardo should have finished fourth in Hamilton's absence but had already retired with an apparent gearbox problem just after Hamilton's second stop.

That meant Romain Grosjean ended his point-less start to the 2018 season in style with fourth place for Haas, the best result in the American team's fledgling F1 history.

His team-mate Kevin Magnussen battled back from losing places after not pitting under the Bottas-induced VSC to finish fifth and net Haas a huge points windfall.

Esteban Ocon and Sergio Perez took advantage of the chaos to rise to sixth and seventh from 11th and 15th on the grid, ahead of pitlane starter Fernando Alonso.

The McLaren driver ran 19th early on and, after complaining at that point to his team over the radio that he refused to run in that position all race, used the VSC and a strong, long second stint to charge to eighth late on.

That included an aggressive move on Charles Leclerc, who reclaimed ninth on the last lap from team-mate Marcus Ericsson after the Swede was let by to try to catch and pass Alonso on fresh tyres.

While that bid failed, Ericsson was still able to complete a double-points finish for Sauber after an extremely long first stint on softs and late charge on fresh supersofts.

Nico Hulkenberg and Brendon Hartley joined the three frontrunners in retiring from the race.

Renault's Hulkenberg suffered a spectacular engine failure early on while Hartley stopped near the end after a bizarre mechanical failure forced him off-track at the penultimate corner and eventually forced him to stop at Turn 2.