Hamilton overcame a torrid start to the Sepang weekend for his Mercedes team to narrowly beat Ferrari's Kimi Raikkonen to pole position, as his main title rival Sebastian Vettel was sidelined by a costly engine failure.

Ricciardo, who qualified fourth, just behind Red Bull team-mate Max Verstappen, expects Hamilton to play the percentages as long as he adds to his 28-point championship lead.

"If he finishes in front of Seb, it's a win.

"I don't know where they [Mercedes] are on engines as well, I don't think they're going to run to the top [of the engine] for the whole race.

"I think they will have to be conservative for their sake, especially if they're in a podium position and Seb's still seventh or whatever.

"So it could bring the whole race towards us."

Ricciardo does not believe the Mercedes car will have enough pace to dominate proceedings, and is relieved Raikkonen will not be starting from pole.

He said Raikkonen should have "the best car" in dry conditions on Sunday.

"If Kimi was to get out in front, I would say, looking at the pace all weekend, it minimises our chances," Ricciardo said.

"But let's say it [the start] goes off in order.

"Mercedes haven't shown enough to really show that they are going to dominate in the dry so they could definitely open up some opportunities."

While Hamilton reverted to a previous Mercedes chassis specification, Valtteri Bottas continued with the update it brought to Malaysia and struggled to fifth on the grid.

Ricciardo said Hamilton's qualifying pace is not a guarantee that ditching the upgrade has solved the problems on the Briton's side of the garage.

"Obviously Lewis got it working, Valtteri didn't," Ricciardo said. "I think they're still struggling a bit to find grip in that car.

"I think Lewis is obviously able to find it on one lap.

"I'm not sure he can do that on every lap tomorrow so I'm hopeful it will bring everyone closer." 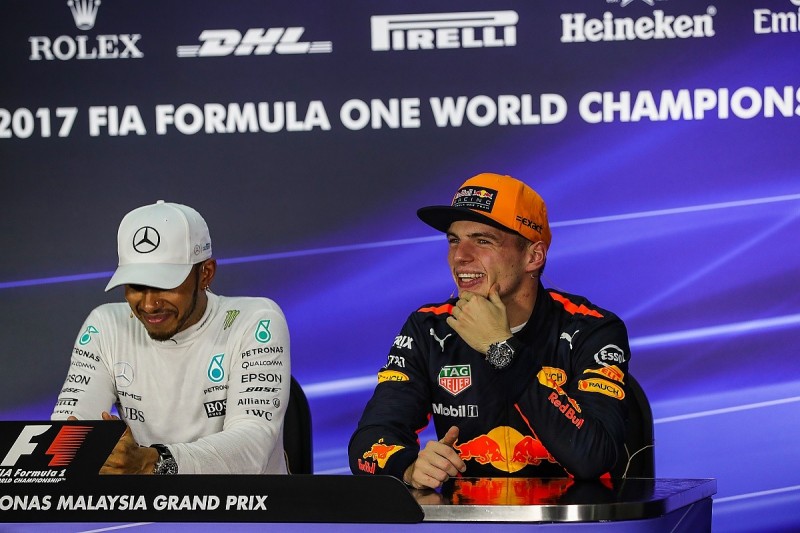 Verstappen said he was "very happy" to be third on the grid in the dry after "struggling a lot" with the balance in the final practice session.

"The whole weekend has been up and down in terms of happiness with the car but we managed to do a good qualifying again," he said.

"I think we could have been a bit closer - definitely we couldn't have beaten them today but for us, to be third here, on this track, is perfect.

"In the long runs, it was all looking good. If it's good enough, I don't know."