He suggested that Red Bull will not be able to confirm it is keeping Daniel Ricciardo or make a call on Carlos Sainz Jr's future until Hamilton is announced at Mercedes.

Sainz remains under contract to Red Bull and can be called back from Renault to RBR should Ricciardo leave. Max Verstappen is on a long-term deal for the other Red Bull seat.

Horner was sitting next to Mercedes motorsport chief Toto Wolff when he was asked to clarify Sainz's position, and he made it clear in an aside to his counterpart that Ricciardo's future is connected to that of Hamilton and to some degree Valtteri Bottas.

"All of these things are interlinked in some way, shape or form," said Horner.

"I think the whole driver market is waiting for Toto's driver to kick that off.

"I'm hoping at Silverstone you're going to finally get your finger out and sign a contract. He's worth every penny! 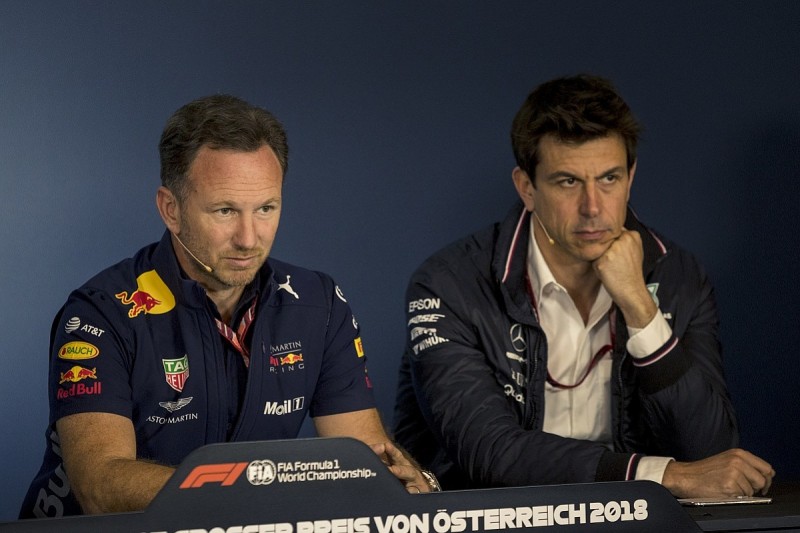 "As soon as Toto signs his contract, or two contracts, that then will cascade, and Carlos Sainz will be a mechanism within that.

Pressed on Red Bull's plans for Sainz, Horner said: "I thought I'd successfully managed to swerve that question! Look, Renault have a desire to keep Carlos.

"It really depends on whether we have a requirement for him or not. Our intention is to retain both drivers. Once that's cleared, the we'll sit down with Carlos."

Horner remains confident that the Ricciardo deal will eventually be signed in the coming weeks.

"Things are progressing well with Daniel," he said.

"I think things will be concluded prior to the summer break. Our priority has been firstly to get the engine situation sorted, and now things are progressing with Daniel.

"I'm sure in the next couple of weeks hopefully we'll be entering the finishing straight to get things concluded prior to the summer break."