In 2015 Hamilton secured the championship at the United States GP in October, and was then defeated by Mercedes team-mate Nico Rosberg in the season's last three races.

"Two years ago definitely looking back you could say the focus was not the same as it had been during the season," Hamilton admitted.

"But I don't want to be in that position again.

"I'm planning to just keep the pressure up exactly the same as it's been all year."

Hamilton says winning his fourth title has not sunk in yet because he is still fully focused on race wins, adding that he can now push even harder as he has nothing to lose.

"The reason it's not really sunk is I've tried to stay in the zone, really," he said.

"I'm still kind of in the same frame of mind.

"I've still got two races to go, and it feels abnormal to back off at this point.

"It's a better time than ever to apply even more pressure, just because you can. It's two more wins available."

Hamilton surpassed Ayrton Senna's record for F1 poles during the 2017 season, and is now 29 wins behind Michael Schumacher's record of 91 GP victories. 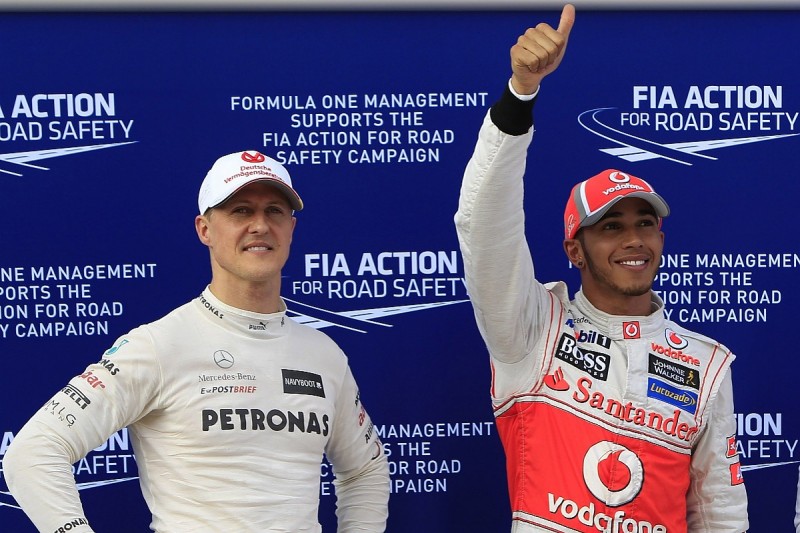 Schumacher won 64 races in his first 11 full F1 seasons, with Hamilton on 62 victories as he nears the end of his 11th year in the championship.

But increasing calendar lengths and Schumacher's 1999 injury skew the comparison. Schumacher won his first 62 races within his first 174 GPs, whereas Hamilton took 205 races to reach that mark.

Hamilton said Schumacher's victory record had always seemed out of reach until recently.

"I think I can continue winning for a long, long time," he said.

"Ultimately it depends if the fight remains within you. Of course it is still there now.

"I still don't really have a desire to chase Michael, although I am obviously a lot closer than I ever was.

"Before it felt so distant, getting 91 wins.

"It's still a long way off, but it's not impossible to think that I could potentially get somewhere near."

Asked if he thought Schumacher's record of seven world championships was achievable, Hamilton said it was something he had never considered until this year.

"My goal has never been to reach Michael, I always wanted to do something similar to Ayrton," he insisted.

"So now I'm beyond that, the dream is expanding into an area I wasn't planning."