Charles Leclerc has revealed his tactics to keep Max Verstappen behind during the Bahrain Grand Prix which launched his victory charge at the 2022 Formula 1 opener.

The Monegasque driver led a Ferrari 1-2 from team-mate Carlos Sainz Jr after Verstappen suffered a fuel system failure with his Red Bull that forced him to retire from the race late on, having fought with Leclerc for the victory earlier in the race.

The pair traded overtakes for the lead on three consecutive laps during the opening stint, Verstappen getting ahead with the aid of DRS at Turn 1 before Leclerc charged back ahead in the run to Turn 4.

During the post-race press conference, Leclerc explained how he made sure to keep in DRS range by braking early at Turn 1, thereby ensuring if Verstappen did get ahead then he could instantly fight back on the following straight.

The tactic ultimately allowed Leclerc to also break from Verstappen when the Dutchman locked up and ran wide in an unsuccessful passing move at Turn 1, allowing the Ferrari driver to stay ahead and push on with DRS to build up his lead.

“I only followed into Turn 2, as I was only behind for one corner and then would overtake Max back into Turn 4, it was tricky but it was nice though,” Leclerc said after securing Ferrari’s first F1 win since the 2019 Singapore GP.

“It was on the limit, hard racing but we will always gave each other space which was nice.

“Following him into Turn 2 was a bit more predictable than what I expected or what I had last year so this was good but it was always very close.

“I would always try to brake very early into Turn 1 to get the DRS for Turn 4 and it worked out three times in a row so then I could keep my lead.

“It was also very tricky because I was struggling quite a lot with my energy and had to manage that too but then after the third lap [of overtaking] I was in a better window with it and could push again to have a bit of margin to manage my race.” 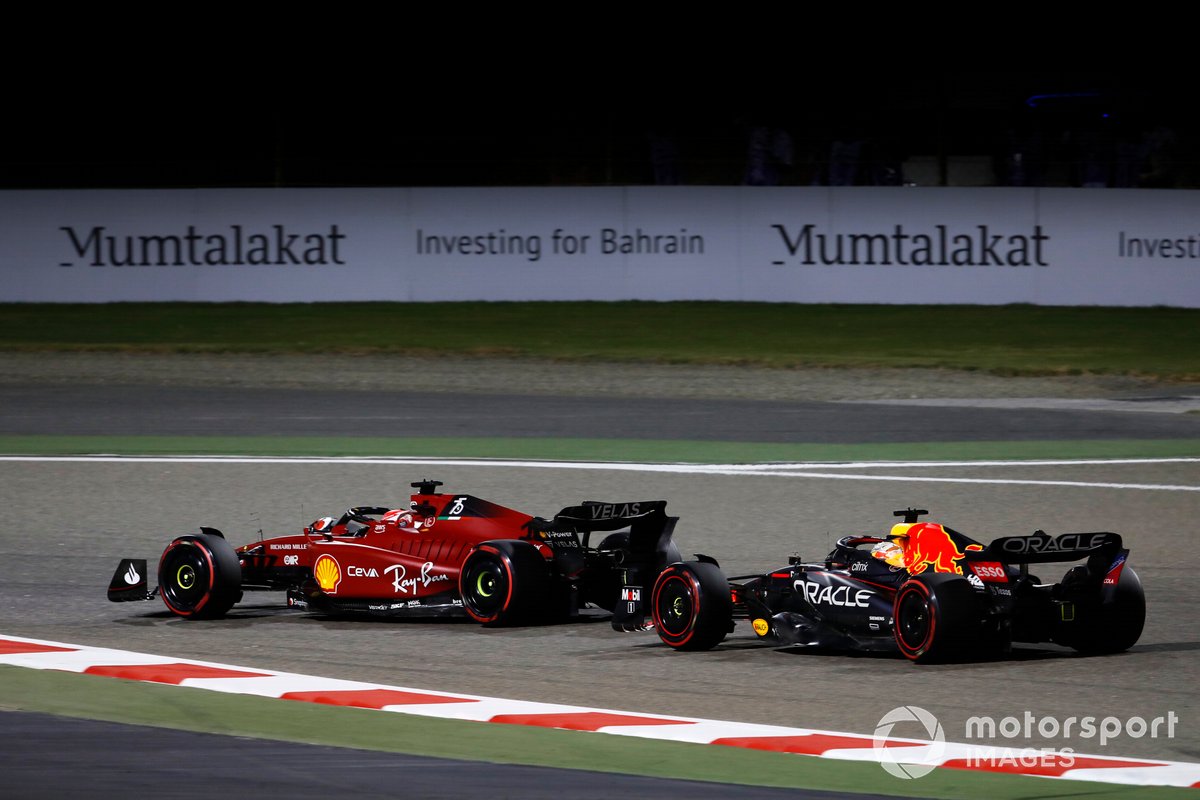 Leclerc ultimately came out on top in his fight with Verstappen, who later retired

Leclerc was also able to maintain a gap to Verstappen during the pitstop cycles, with Red Bull twice attempting the undercut to try to get the reigning F1 world champion in front once Leclerc pitted.

When asked for his thoughts on battling Leclerc, Verstappen said: “It was alright, I think overall I didn’t have a great balance to attack but I had two attempts or more less with the DRS.

“It was fun, I had a good battle with Charles.”

He later added: “Charles is a good racer as well so it was good fun out there.”