At the start, Leclerc and Verstappen shot off the line in unison, with the Ferrari quickly swinging across to his right to cover off the Red Bull and seal the inside line for the first corner.

There, Verstappen braked later and got completely alongside Leclerc, but the leader’s position on the inside meant he was easily able to pull ahead through Turns 2 and 3, then weave once on the short straight up to the Turn 4 right, where he pulled away clear in the lead.

Leclerc was already out of DRS range ahead of Verstappen by the end of the first lap of 57, with Sainz chasing the world champion and being followed by Hamilton, who had edged out Sergio Perez as the Mexican slid out of Turn 1, falling behind Kevin Magnussen’s Haas as a result.

Over the next few laps, Leclerc – running new soft tyres versus used ones on Verstappen's car – pulled away from his Red Bull rival who at one stage complained about his mid-corner engine braking being “funny”. Leclerc’s gap increased by a few tenths per lap, the pair the only drivers of the frontrunners able to regularly stay in the 1m38s bracket.

By lap 10, Leclerc’s lead had reached three seconds, with Sainz a further chunk behind and now running ahead of Perez, who had passed Hamilton after the Mercedes driver had fallen from pressuring Sainz to dropping back unable to match the frontrunning pace. 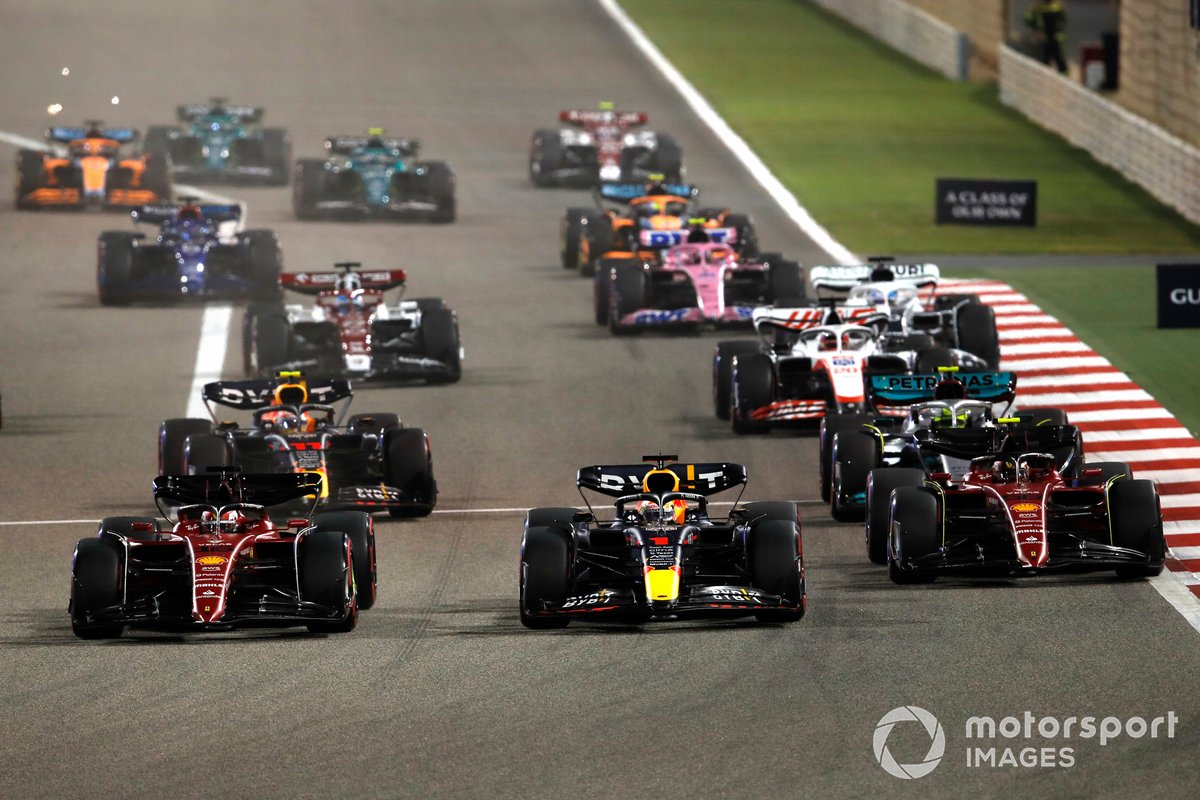 Leclerc aced the start to cleanly lead Verstappen and Sainz

At the end of lap 14, Verstappen and Sainz, who had also started on used softs, came in to take new ones, with Leclerc stopping at the end of the next tour to do the reverse. Verstappen had used his outlap on fresh rubber to erase Leclerc’s lead completely, but the Ferrari was able to maintain the lead at the pit exit.

But the next time by at the start of lap 17, Verstappen used DRS to close a 0.7s gap and dive to Leclerc’s inside at the first corner, taking the lead with a thrilling move on the inside line. But he was only briefly ahead as Leclerc used DRS himself on the run to Turn 4, retaking first with a bold pass around the Red Bull's outside.

The same sequence played out again on the next lap, although this time with Leclerc retaking the lead by nipping to Verstappen’s inside on the Turn 4 approach, then edging his rival wide to get back ahead.

On his third attempt into Turn 1, this time on lap 19, Verstappen went from 0.9s behind to send a wild move on the inside, but this time he locked up heavily and the Ferrari was able to nip back by and run clear – moving out of DRS range as a result.

The lock up and DRS loss sapped Verstappen’s momentum, as he slipped back to run in the low 1m38s while Leclerc put in a series of mid-to-high 1m37s that soon restored his three second advantage.

By the halfway point, Leclerc was running four seconds to the good, losing a chunk while lapping Nico Hulkenberg before gaining it back and more as Verstappen got around Sebastian Vettel’s temporary replacement at Aston Martin.

Red Bull stopped Verstappen first at the second round of stops, pulling the Dutchman in to go to the mediums at the end of lap 30, with Ferrari getting Leclerc to cover him exactly the next time by.

Leclerc emerged much further ahead this time around, despite Verstappen doing a slightly quicker outlap than earlier on, with Ferrari beating Red Bull on the stationary time by half a second. 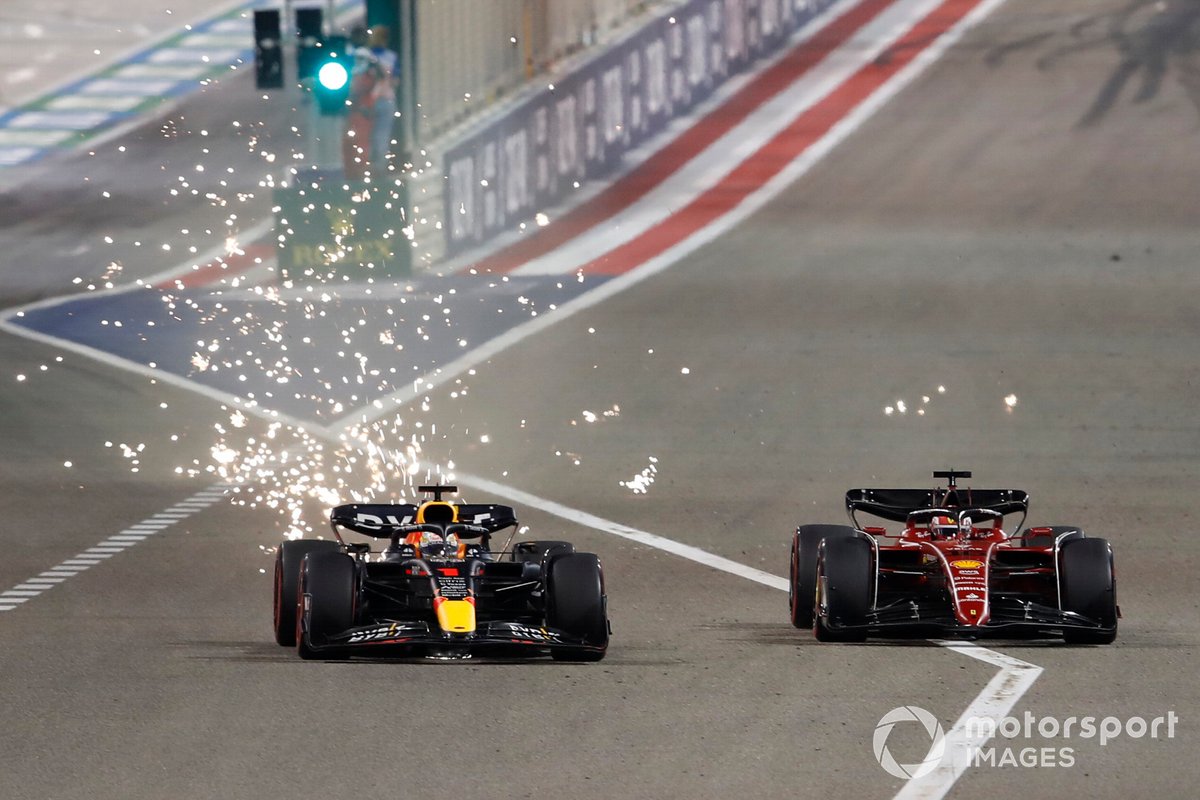 Verstappen and Leclerc engaged in a spirited battle, but Leclerc emerged on top

The pair immediately hit the 1m36s bracket they had not been doing earlier on, even as they lapped traffic during the early phase of the third stint, where Verstappen furiously told Red Bull he had taken it easier on the outlap than he wanted and would “never ever” do so again, such was his fury to have stayed so far behind Leclerc even with an undercut advantage.

Although Verstappen cut into Leclerc’s lead to reach two seconds behind in the laps immediately following their second stops, the Ferrari was soon able to restore its advantage once again, with Leclerc holding onto the mid 1m36s as Verstappen fell towards the 1m37s.

By lap 43 Leclerc had built his lead back to four seconds, when Red Bull opted to bring both its cars in for a third stop – Perez having run the mediums on his second stint and then closed in to run adrift of Sainz, well behind the two leaders.

Ferrari appeared to be leaving Leclerc out to see out the race on a two-stopper, with Sainz brought in to cover Perez, but the final stages were made more dramatic when Pierre Gasly retired with an engine issue that became an engine fire on the race’s 46th tour – the AlphaTauri stopped at the exit of Turn 3, just at the start of the short second straight.

The virtual safety car was activated but the full safety car was called into action, which was when Ferrari brought Leclerc in and he was able to take another set of softs for the restart.

Racing got back underway at the start of lap 51, all lapped cars having been allowed to overtake. Before this, Verstappen had complained loudly about his steering getting heavier in corners and on straights, with Red Bull moving to tell him it was would be an issue to the end of the race that he would have to adapt to.

When the safety car came in, Leclerc shot back to racing speed while Verstappen was pinched tight against the penultimate corner and was so far clear the action became about Sainz attacking for second.

Verstappen obliged the Spaniard to take the outside line, with the pair quickly falling behind Leclerc, who roared to a 1.6s new lead with the race’s fastest lap – a 1m24.570s.

He easily pulled clear to win by 5.5s, taking his first Bahrain GP win at the venue where he lost a first career F1 victory to a late engine issue three years earlier. 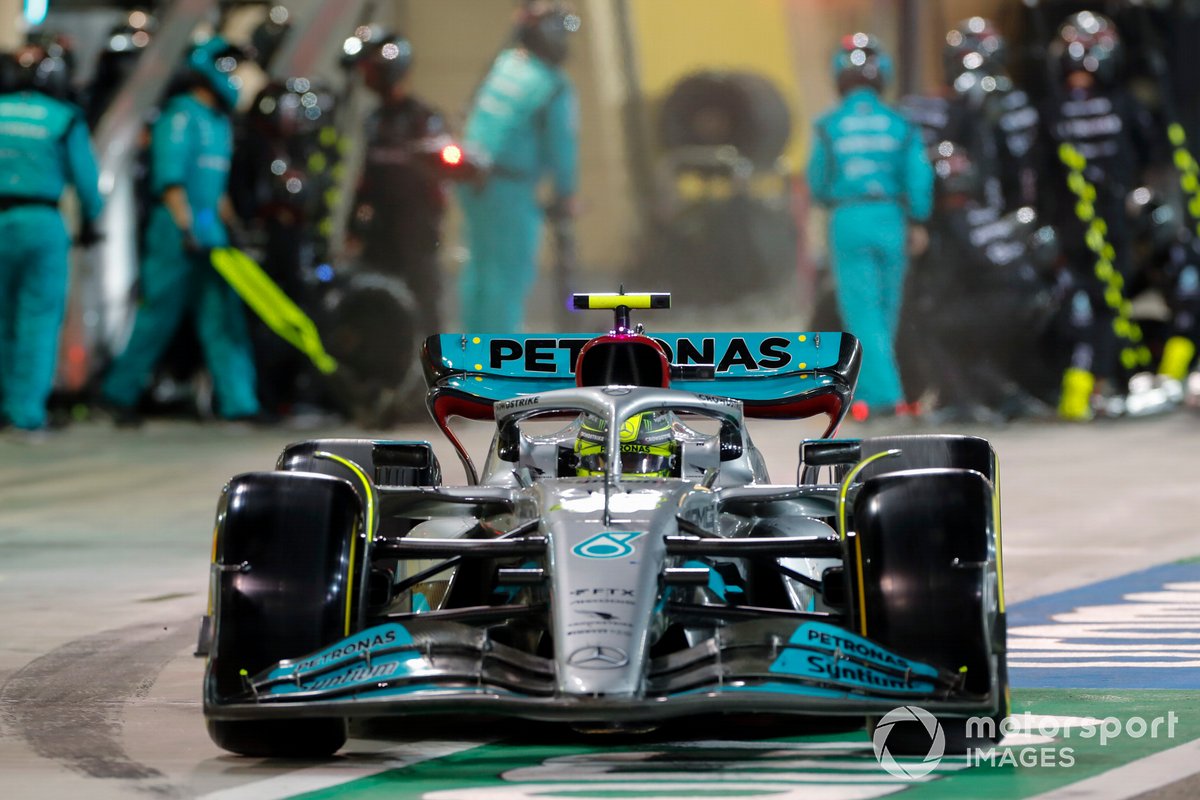 But it was Sainz was able to follow Leclerc home as Verstappen went from complaining about his steering issue, to reporting a battery problem Red Bull initially dismissed and then reported then was a fault that it could do nothing about.

With two laps to go Verstappen suddenly dropped back on the penultimate straight and then crawled back to the pits to retire, with Perez then reporting a power loss as Hamilton – who had run a soft, hard, medium, soft three-stopper – closed in to threaten an unlikely Mercedes podium.

Just when it looked like Perez might hang on, he spun at Turn 1 on the final lap, his engine seizing and spinning his rears, putting him out on the spot.

Hamilton therefore finished third, 9.6s behind Leclerc, with George Russell fourth having quickly risen up the order from his ninth place grid spot during the early stages and been tracking his team-mate at 14s behind before the safety car period.

Magnussen battled his way to fifth, having run most of the race between Russell and Gasly, with Valtteri Bottas recovering from a slow start to finish sixth.

Esteban Ocon and Yuki Tsunoda got ahead of Fernando Alonso ahead of the safety car, with that trio taking seventh to ninth at the flag.

In his first F1 race, Zhou Guanyu finished 10th to claim a maiden point in the championship, with Mick Schumacher 11th for Haas, ahead of Lance Stroll, who led the former lapped runners home well adrift of the pack – the restart having taken place before they could catch back up.