Kevin Magnussen, who topped the times on day three, ended his second day as a McLaren driver by oversteering into the barriers at Turn 10.

Daniil Kvyat's Toro Rosso also stopped out on track at the same corner, and at the same time, on what was the first lap he had attempted since a quick flurry in the opening minutes of the day.

It had otherwise been a successful day for McLaren and Magnussen, who - despite a spin at the final chicane - racked up 110 laps.

That tally was only bettered by Ferrari's Fernando Alonso, who managed 115 in a trouble-free day for the F14 T.

Mercedes' Nico Rosberg had led the way in the morning with 91 laps, but in order to balance mileage handed over to Lewis Hamilton for the afternoon. The Briton turned in 41.

That was in stark contrast, once again, to reigning champion Red Bull, which managed just seven laps before calling an early close to a troubled four days.

The team finished at the foot of the overall timesheets, and with the least number of laps completed.

As it floundered, Mercedes hit the fore with the first full race simulation, conducted by Rosberg in the morning.

Hamilton, Alonso and Massa attempted long runs of their own during the afternoon, only to be cut short by a trio of red flags which produced a stunted end to the test.

The first was caused when Adrian Sutil lost the rear of his Sauber exiting the chicane and became beached in the gravel.

Magnussen's spin at the same corner, and then his off at Turn 10, brought about the other two stoppages.

The Dane still ended the final day fourth fastest, behind Massa, Alonso and the impressive Daniel Juncadella, who took over from Nico Hulkenberg at Force India. 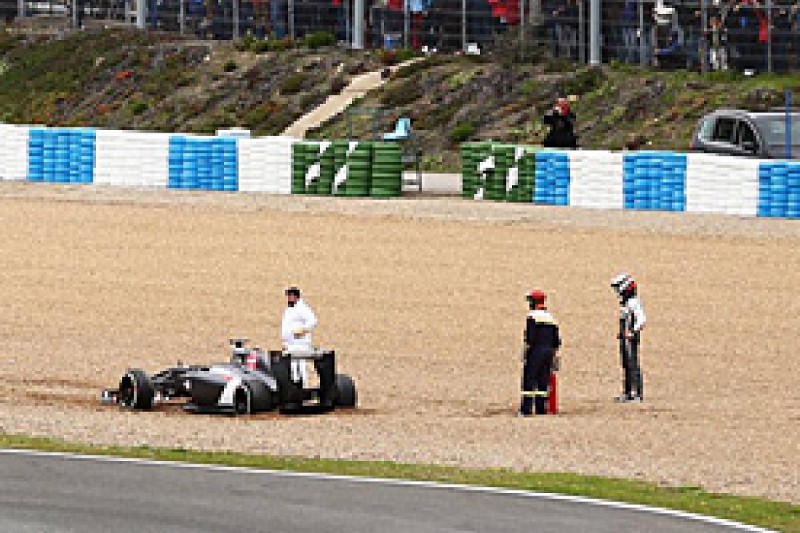 The Spaniard, who races in the DTM, set overall bests on a number of occasions during the afternoon, and racked up 81 laps for the team.

A late run lifted the Frenchman into sixth for the day, and also put Marussia ahead of Red Bull in terms of laptime and lap count for the four days.

He did at least manage 54 laps, significantly more than Kvyat or Daniel Ricciardo, who propped up the timesheets.