In the close Formula 1 world title battle between Mercedes and Red Bull, a strength of the German manufacturer's W12 car using its tyres could become a persistent challenge that may prove pivotal in 2021.

Mercedes escaped from Imola with its lead of both Formula 1 world championships still intact, but the team is under no illusions of the gap to Red Bull that remains.

Lewis Hamilton scraped pole position for Mercedes on Saturday, aided by mistakes from both Max Verstappen and Sergio Perez behind. A rocket start by Verstappen then put Red Bull in control of the race, leading to its first win of the year, with a brilliant - albeit fortunate - recovery to second place sparing Hamilton’s blushes after a rare error.

Mercedes trackside engineering director Andrew Shovlin conceded after the race that it was a “relief” to still lead the drivers’ and constructors’ points standings, and that there remains a performance deficit to Red Bull that must be overcome.

“They will win this championship if we don’t improve our car very quickly,” Shovlin said of Red Bull. “That’s really our mindset - that we are still the ones chasing.”

Red Bull F1 boss Christian Horner said after the race that he expected the title fight to be settled by marginal gains between the two teams, with one early battleground in 2021 surrounding tyre management.

Mercedes may have struggled with rear-end instability on the W12 car as a result of the downforce cuts for 2021, but the team has worked to remedy the issue over the first two races. Valtteri Bottas said he felt “a lot happier” with the car after topping both practice sessions on Friday, giving the Finn hope of taking the fight to Red Bull. 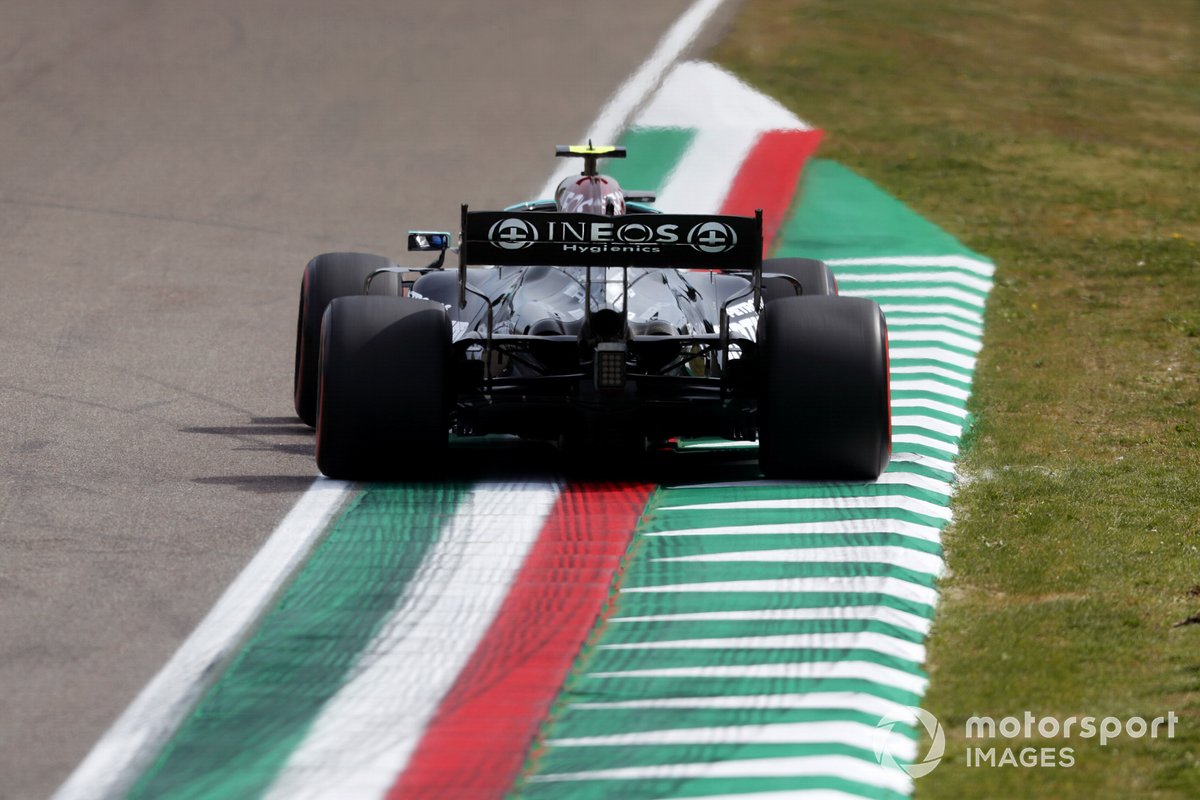 But Bottas’s weekend unravelled in qualifying due to a very different issue. After setting a time in Q1 that would have been good enough for fourth on the grid had it been set in Q3, his pace plummeted, leaving him a lowly eighth on the grid.

Bottas said after qualifying that he was struggling on corner-entry, marking a new issue to that encountered in Bahrain, which Mercedes later related to tyre warm-up. The problem was even more noticeable in the race as Bottas struggled to get his tyres into the right temperature window in the cool conditions, leaving him stuck behind Lance Stroll in the first stint. George Russell was able to gain time on the Finn by virtue of his warmer slick tyres - fitted two laps earlier than Bottas’s own mediums - before their race-ending crash on the approach to Turn 2.

It marks a change in fortune for Mercedes. The team has traditionally fared better in cooler conditions and struggled more in the heat with its recent cars. Now, it has the opposite issue.

“Over the years, we quite often struggle in hot conditions, and cold has been normally good because we’ve had good tyre warm-up,” Bottas said. “We’ve been really trying to develop the car, but didn’t overheat the tyres, but obviously with the negative that if we need to get quickly into the tyres, then maybe some other cars can do it better than us.

“For me personally, for example compared to Lewis, it’s on such a knife-edge in qualifying, that sometimes you get it to work - like me in Q1, when I did a much faster time than in Q3, I got them to work.

“It's all about one or two degrees of surface or tyre temperature. It’s hard to explain. Obviously track temp was changing a bit, depending how much cloud there was, so maybe that had a bit of a factor.” 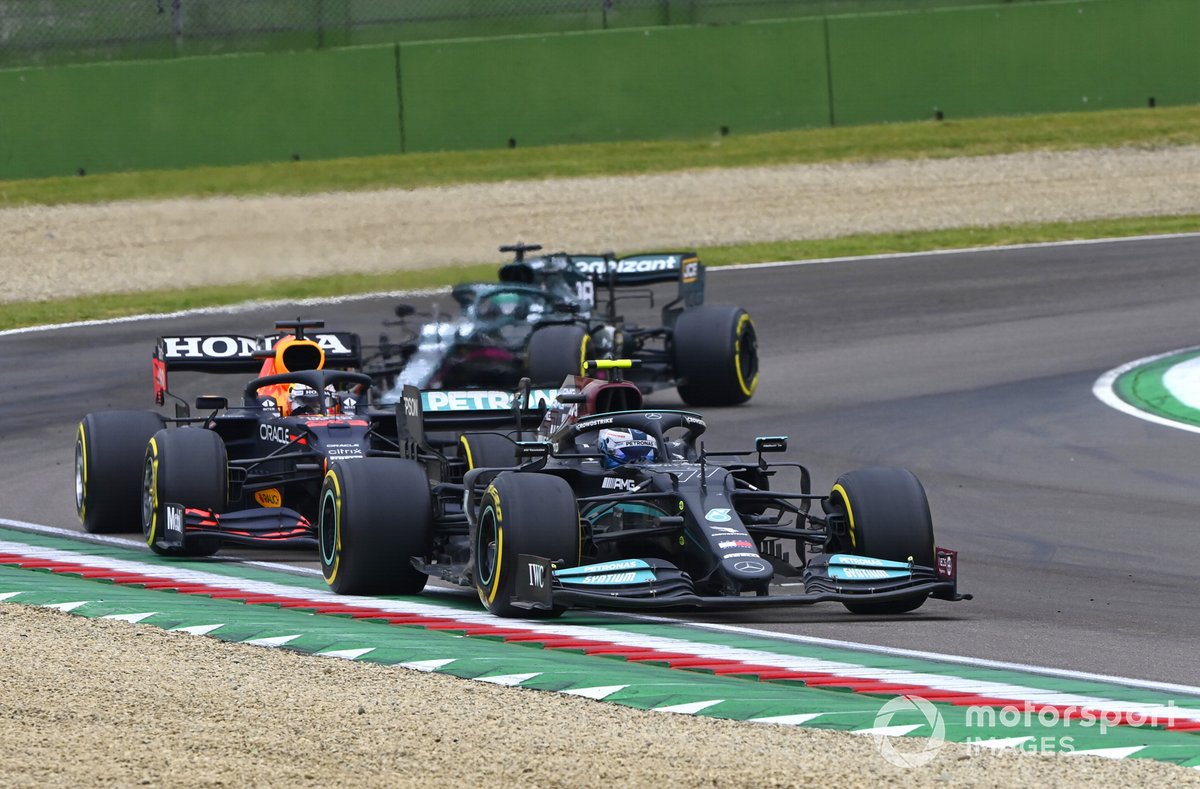 Shovlin said the tyre warm-up issue was something Mercedes had to go away and work on in order to help Bottas turn around his tough start to the season.

“The thing with tyre temperature, it’s often a very small difference has a very big impact on grip,” Shovlin said. “Unfortunately for Valtteri, he was just the wrong side of a lot of cars, and that gave him a very compromised start position. That’s one thing we’ve got to go off and work on with him, and help him understand.

“In the race, he was struggling following and being able to overtake, just because he was losing front-end in the tow, but also the rear wasn’t strong, and again it was that theme that warm-up was a problem for him.

“On the transition to medium, the warm-up meant that he got caught in that bunch of cars where some backmarkers, Max was there as the leader coming through, and that is what really triggered the sequence that ended his race.

“I think all the negatives have come down to this issue of warm-up in those conditions, and we need to find a solution to that, then I think if we do that, the rest of it should click into place.”

But while tyre warm-up might be a current Achilles’ heel for the W12 car, its tyre management as a whole is in fact one of the areas Red Bull believes it trails on.

In Bahrain, Hamilton was able to keep his hard tyres alive for half the race and hold on - with some thanks to the track limits controversy - to beat Verstappen, who was running much fresher tyres.

Horner felt a similar picture unfolded at Imola towards the end of the first stint on intermediate tyres. Hamilton had hung around five seconds back from Verstappen throughout the first half of the race, only to then bear down as they neared the crossover point to switch to slicks. 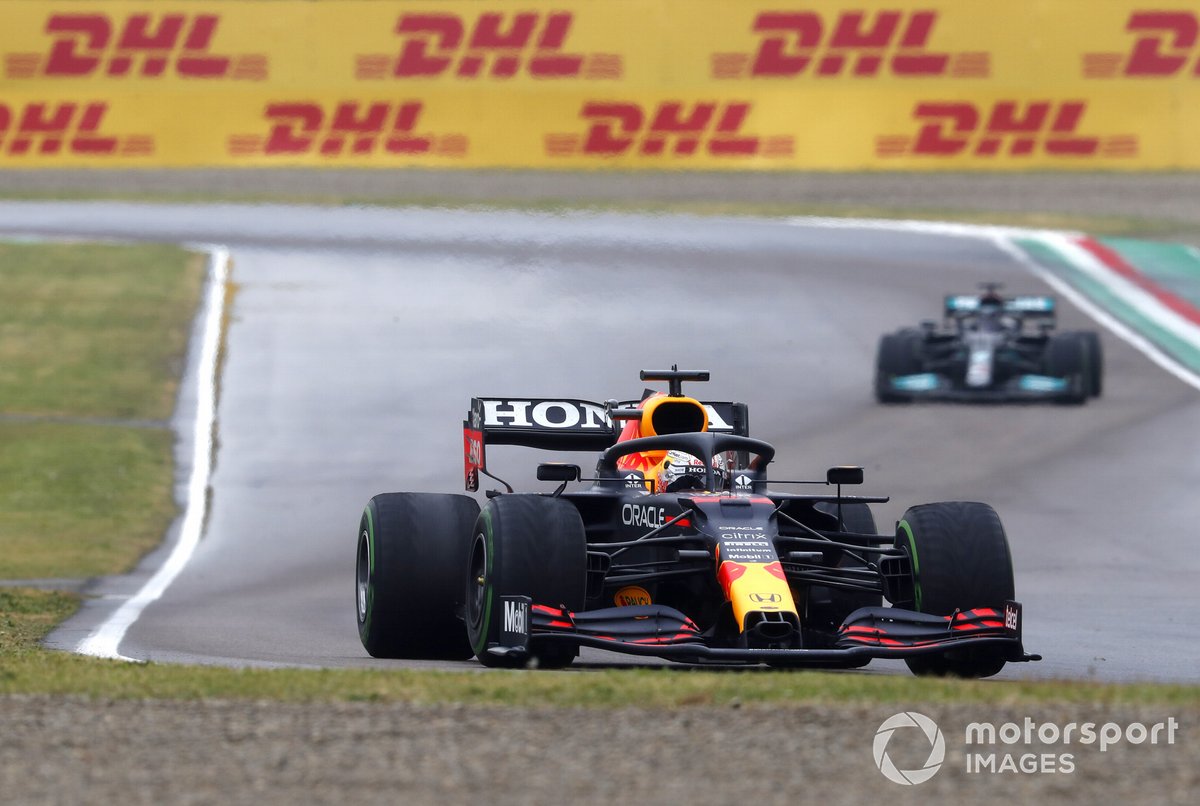 Verstappen was radioing his engineer lap after lap, asking when it was time to pit, and managed to get a one-lap advantage on the Mercedes by coming in early. It caused the gap to grow again to five seconds, only for Hamilton to quickly close up before his mistake at Tosa.

PLUS: How the Emilia Romagna GP result hinged on three crucial saves

“The pace is obviously very close with Mercedes and I think there are strengths and weaknesses of the cars in different areas,” Horner said.

“Once they're on, obviously the same spec of tyre, in clean air, [Mercedes] looked very, very competitive. Indeed, he got the fastest lap.

“It's very tight and it's about getting the most out of the car on a case-by-case basis. But I would say Mercedes again, like in Bahrain, looked a bit stronger at the end of the stints than we did.”

Shovlin explained how Mercedes worked the balance between quick tyre warm-up and keeping the compounds alive for a long stint, leaving him unsure just how much of an advantage Red Bull had.

“It’s always a bit of a compromise between the warm-up and then the longer run,” Shovlin said after the race. “Whether we got that compromise right, we need to go off and have a look at it. The glimpses we saw on the inter, it looks like yes [Red Bull] did [have better warm-up] - although Lewis has obviously sustained that damage. 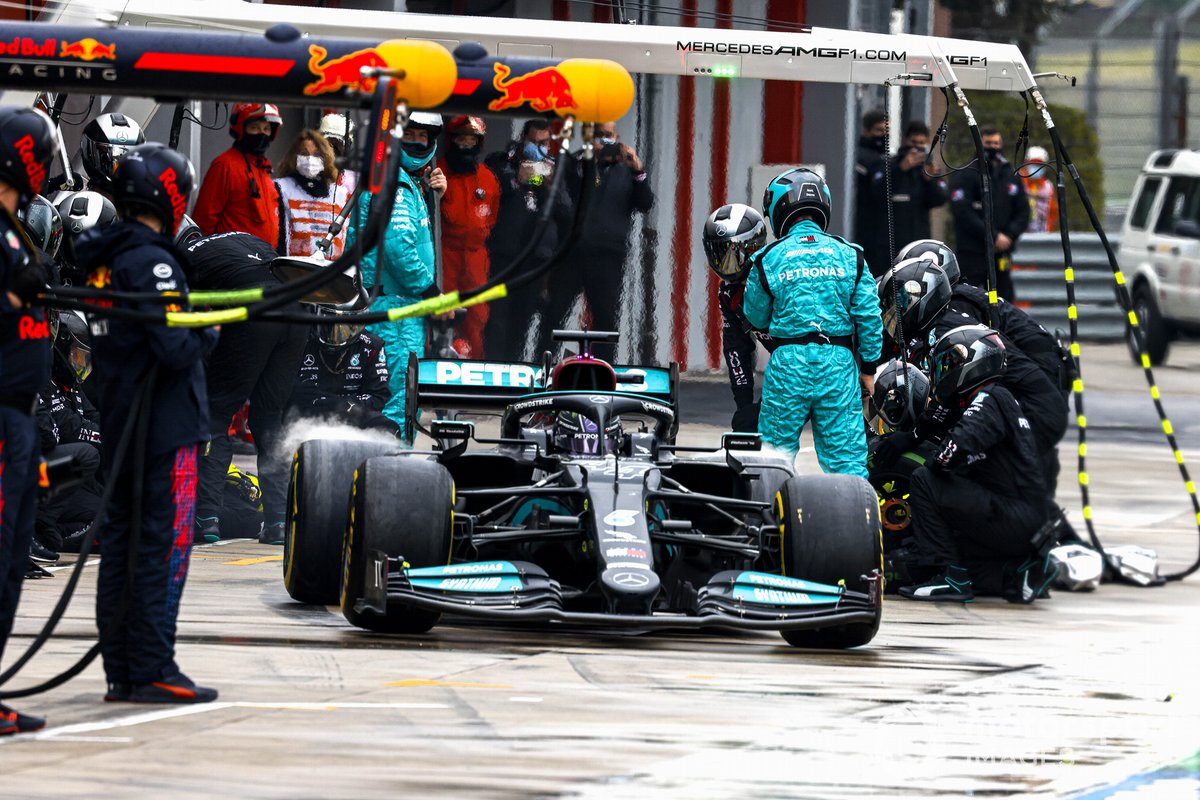 “On the medium tyre, it’s not so clear. I thought we were actually pretty good on warm-up there compared to them.”

As F1 heads towards the European summer, it could be the warmer conditions naturally help solve some of the tyre warm-up issues - and help Bottas in particular.

But for now, it is a trade-off that Mercedes is trying to manage as it aims to protect its points advantage against faster opposition. 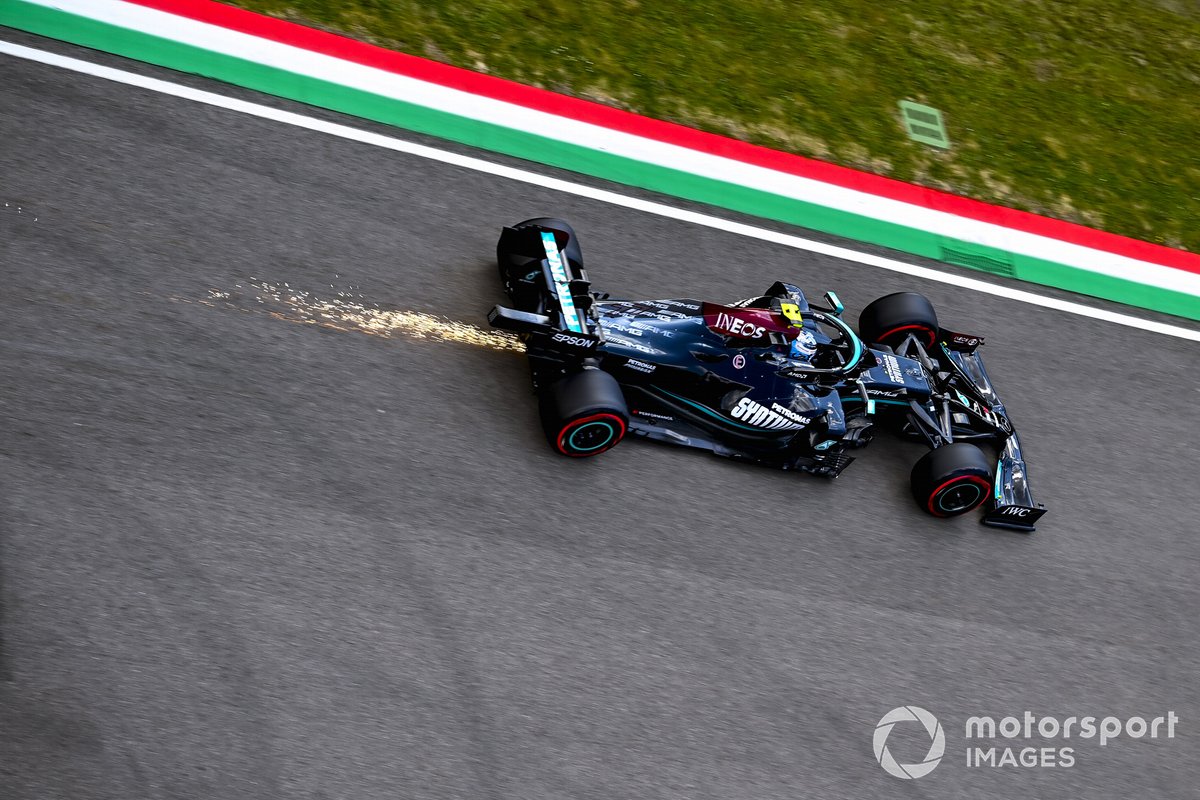