© 2021 Motorsport Network. All rights reserved.
TV Buy tickets Store
Previous / Max Verstappen: Esteban Ocon shove 'could have been much worse' Next / Fernando Alonso: I might be desperate for F1 return by April 2019
Formula 1 / News

Fahim Choudhary, 23, is currently studying Engineering Project Management at Lancaster University in the UK and was unveiled as the winner of the Middle East finals - the seventh and final winner of the regional competition in 2018.

In addition to a work placement at Renault, he will also spend six months at Infiniti's Technical Centre Europe in Cranfield.

"I'm very excited, this is a brilliant opportunity," said Choudhary.

"I'm still in shock that I was selected because the level of talent in the Middle East finals has been really high, but I'm delighted with the outcome."

The Dubai-based student discovered his success in an announcement on Thursday afternoon by team boss Cyril Abiteboul in front of the Renault garage in the Yas Marina pitlane, ahead of this weekend's Abu Dhabi Grand Prix.

The director of global motorsport and performance projects at the Infiniti Motor Company, Tommaso Volpe, was impressed with the performance of Choudhary over the two days of the Middle East finals.

"We had our 10 finalists arrive in Abu Dhabi on Wednesday and they went through various challenges, such as an engineering exam, interview with judges, a dragster challenge and a Harvard challenge - that was in order to select the top three," explained Volpe. 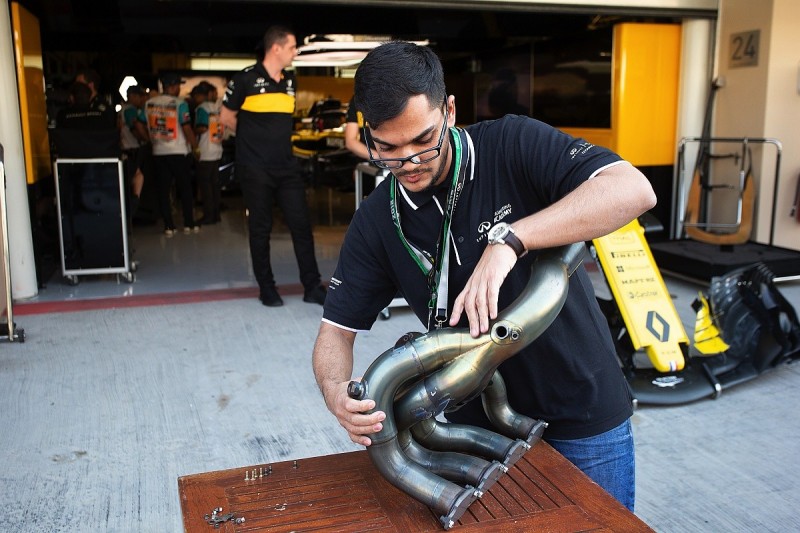 "On the second day, the three remaining candidates had to assemble a Formula 1 exhaust, without any information, which was an excellent challenge to test how best to manage gases just by looking at the shape of the parts.

"Finally, we had to select a winner, which is always the most difficult thing to do, as they are all very close."

Choudhary's selection makes him the seventh and last winner of the 2018 Infiniti Engineering Academy which has had regional finals in the USA, Canada, Mexico, Europe, Middle East, China and Asia-Oceania.

He will join the other winners to commence his work placement in the new year and cannot wait to get started.

"The technology they use in Formula 1 you don't see every day," said the 23-year-old.

"So it will be a great chance to learn and also I want to contribute to both Renault and Infiniti as much as I can."

In January, the applications open for the following year of Infiniti Engineering Academy students, so if you're currently studying and fluent in English then visit http://academy.infiniti.com for more information.

Max Verstappen: Esteban Ocon shove 'could have been much worse'