Vettel clocked a 1m17.017s on the super-softs during his qualifying simulation to finish the session 0.475s quicker than Ferrari team-mate Kimi Raikkonen.

The lap was 1.464 seconds quicker than the previous track record, set by Rubens Barrichello in 2004.

Mercedes struggled for speed, with Valtteri Bottas Ferrari's closest challenger in third, 0.897s off the pace, with Lewis Hamilton half a second further back in fifth.

Mercedes focused on running the soft tyre in the first half of the session while the rest of the field chose the super-soft rubber.

Hamilton's best effort on the softs was 0.949s off the leading pace, with Bottas a further tenth back.

Attention then turned to qualifying preparation, with teams running low fuel and bolting on a fresh set of super-softs.

Vettel slashed seven tenths off his previous time on the softs to extend his advantage at the top of the standings.

When Mercedes tried the super-softs, it was unable to match that pace - with Hamilton struggling for grip and having a couple of off-track excursions. 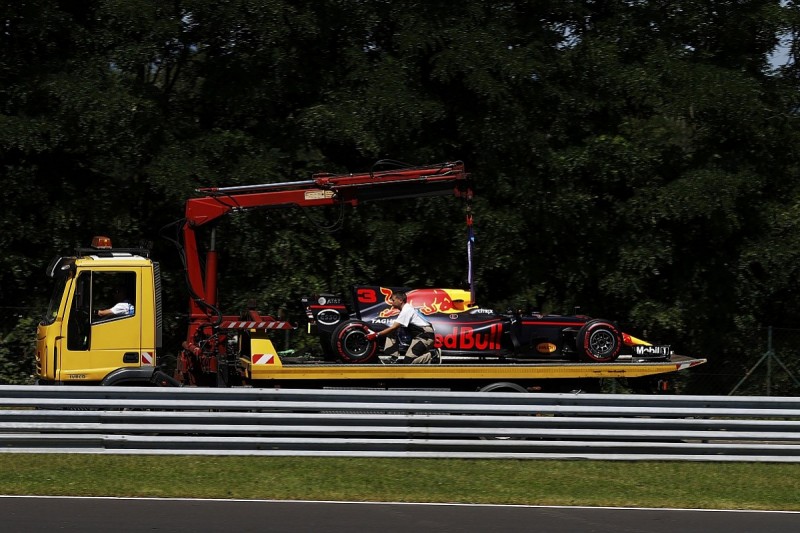 Max Verstappen was the leading Red Bull driver in fourth, 1.177s off the pace, as team-mate Daniel Ricciardo hit trouble.

Ricciardo, who had led Friday practice, failed to complete a qualifying simulation after stopping on track midway through the session with what the team suspected was a hydraulic problem. That left him eighth.

Stoffel Vandoorne pumped in an impressive lap in the closing stages to vault up to sixth, 1.621s off the pace, two tenths quicker than and three places ahead of McLaren team-mate Fernando Alonso.

Renault's Nico Hulkenberg was seventh while team-mate Jolyon Palmer, who had his first clean session of the weekend, completed the top 10.

The Williams driver was taken to hospital in Budapest after Friday practice for precautionary checks but was given the all-clear to compete in final practice.

After 12 laps, he asked the team to stop and his fitness is set to be evaluated ahead of qualifying.

If he is not able to take part, the likely replacement will be Williams reserve driver Paul di Resta, who last competed in F1 with Force India in 2013.