On the eve of a new Formula 1 season, Mercedes will feel the weight of expectation like no other team, having achieved an uninterrupted sequence of six double world championships

The Silver Arrows stands on the precipice of a regulatory clean-sweep, vying for the last 'double' available in this hybrid era.

Scheduled to be unveiled at Silverstone on February 14, the W11 will be an evolution of its predecessor, as the team looks to iron out any imperfections and bring even more performance to bear.

Information gathered ahead of time reveals changes that may help the team to unlock latent performance from a machine that was already pretty formidable last season.

Having scrutinised its own weaknesses and closely studied the opposition's designs, Mercedes has taken a design concept introduced by Ferrari in 2017 and refined it to suit its own package.

The intent of this design concept is to improve flow quality into the radiator inlet and reduce the negative impact that the front tyre wake has on flow into and around the entire sidepod structure. 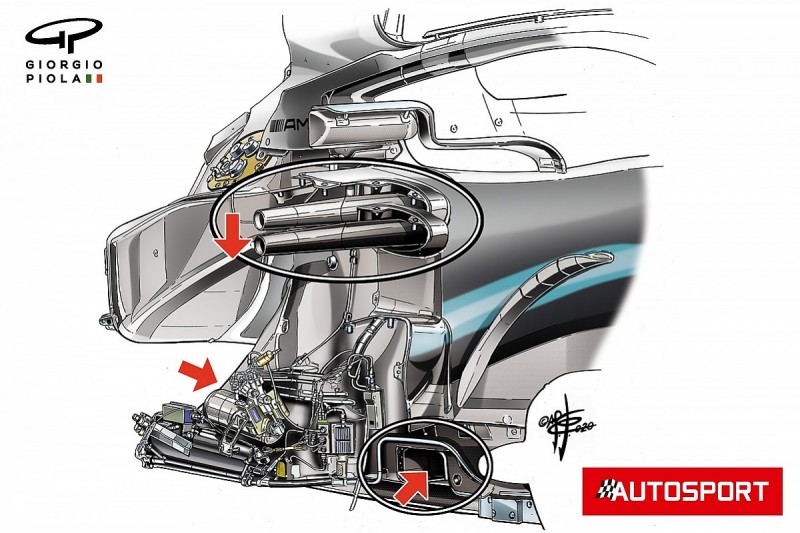 For 2020, Mercedes appears set to join this group, lowering and bringing the uppermost side impact protection spars forward (as seen above) to improve power unit performance and reliability, while reducing drag and refining the aerodynamic output of the car.

Mercedes is keen to edge out rivals when it comes to power unit performance once more in 2020, having given up ground to them last season.

Improving cooling efficiency will therefore be high on the agenda, in order that it can run in higher power modes for longer, as it clearly was unable to exploit the power unit upgrades introduced last season. It will expect further power gains in 2020 that must be unlocked to assure its continued success.

The W10 was already pretty extreme around the midriff, with a distinctive shape to the chassis that pulled everything as close to the body as possible.

To maximise this further, and to take advantage of the new shapes and contours in this region, it will come as no surprise if the W11 were to feature a revised fuel tank layout too, allowing even more scope for the revised radiator and sidepod packaging, while also improving weight distribution.

Why Hamilton's chance to eclipse Schumacher matters even if he fails