How Mercedes could fit DAS into its Formula 1 suspension layout

Formula 1's stable rules for 2020 were expected to lead to design convergence between the top teams, but there has still been room for divergence among their respective suspension designs

The arrangements that Mercedes, Ferrari and Red Bull have produced, particularly with the placement of their steering assemblies, suspension arms and heave dampers all show differing approaches.

Why have their approaches have ended up being so different in the chase for the smallest of performance advantages?

All teams use suspension sub-systems to help maintain a more effective aerodynamic platform, but Mercedes has really led the way on this front ever since its return to the sport a decade ago.

Its front and rear interconnected system, known as FRIC, led the way in suspension innovation at the start of the previous decade, but the system was banned in 2014.

As far back as 2011, the team had installed a hydraulic accumulator used to connect the rear dampers - as seen below. 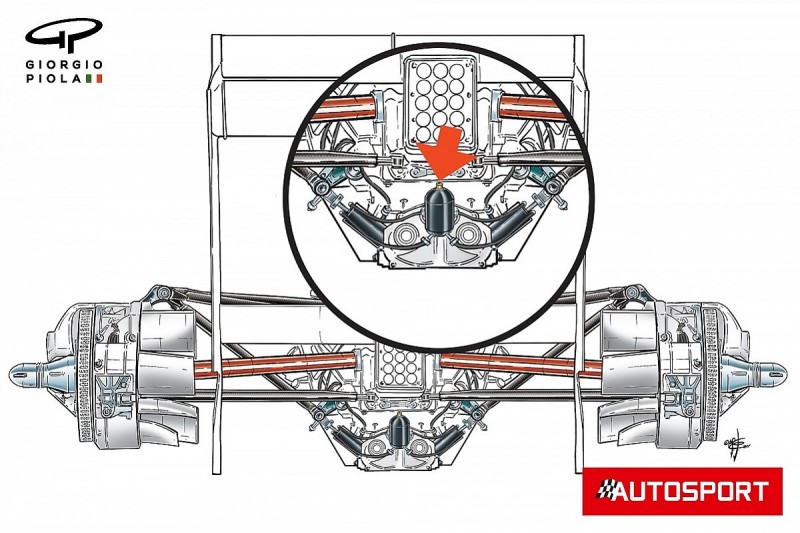 In Brazil 2015 the team tested a hydraulic heave damper, rather than the more classically sprung variant as it prepared for the following campaign.

A more refined version of the hydraulic heave damper arrived in 2016, accompanied by changes to the chassis structure.

During the latter phases of 2019, Mercedes used free practice sessions to assess a new heave damper arrangement, utilising Belleville springs - an arrangement that rivals Red Bull had been familiar with.

Hydraulics have formed the basis for its heave damper arrangements throughout this period but, as these will be banned in the upcoming regulation changes, now set for 2022, the team has abandoned its hydraulic arrangement for a more conventionally sprung alternative this season. 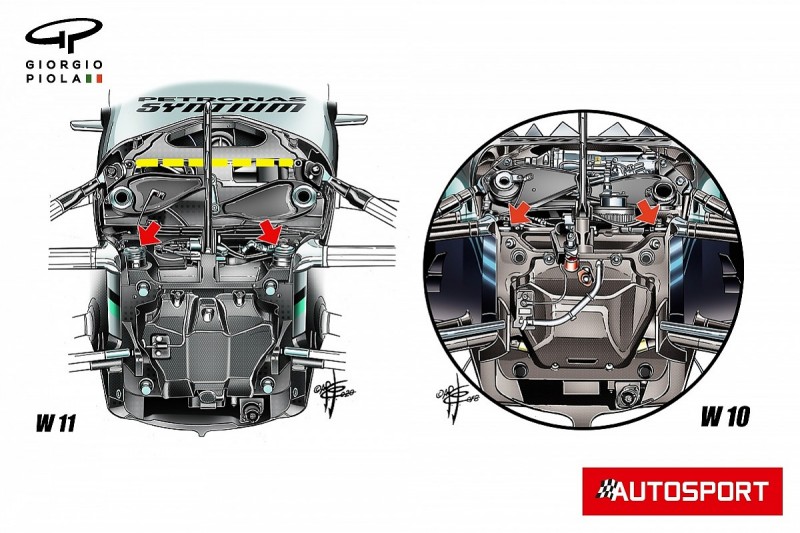 Whilst this may lead to a small loss of functionality it does give the team the necessary time to better understand the setup and where it might be able to make up the resultant performance gap.

Mercedes has also made significant changes to the W11's bulkhead and suspension design to incorporate its DAS system.

As shown, Mercedes' steering assembly was already somewhat bulkier than some of its counterparts.

While DAS has clearly added to that conundrum, the overall size and weight of the system must offer a clear performance advantage to justify its inclusion.

The visual differences between this and last year's assembly have sparked debate over the installation of DAS, with a theory of two opposing rack and pinions now in doubt, as it would outwardly appear to be a hydraulically controlled unit. 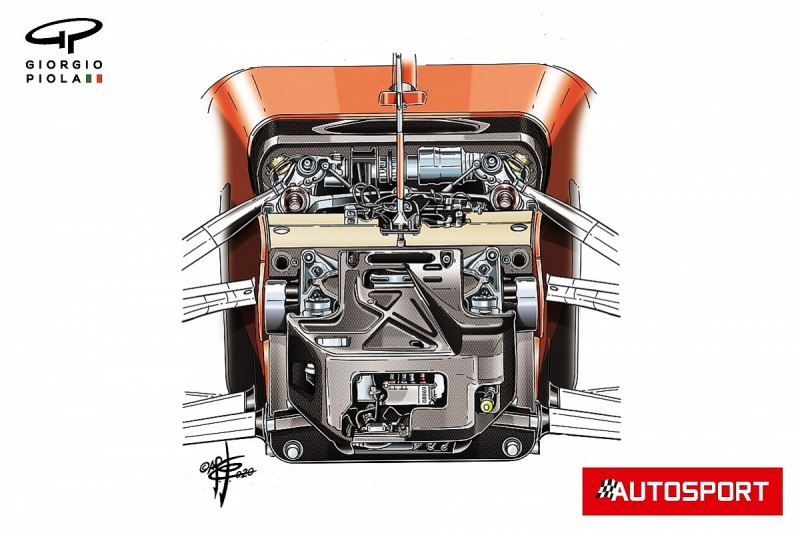 Ferrari has been the least pro-active of the lead trio when it comes to optimising its front-end layout for 2020, favouring design continuity and ease of setup over what could be considered bold missteps.

The design brought to the car in 2017 marked the start of its current design philosophy, as the team uses an exposed layout that makes it very easy to make general setup changes.

The 2019 car's front-end is almost identical to this year's car, with small changes made to optimise its package.

It appears that Ferrari has decided that the performance of its front suspension was sufficient that it warranted putting more emphasis on other areas of the car over the last few seasons.

Red Bull has seen 2020 as an opportunity to push the envelope and close the gap to Mercedes ahead.

It has opted for an aggressive repackaging regime, as the steering assembly has been moved back in the chassis, in order that the steering arms [2] now align more effectively with the rear leg of the lower wishbone [3].

The lower wishbone is part of a multi-link arrangement, with the forward leg [1] an unusual one piece affair that crosses through the chassis, rather than being mounted either side of it.