Red Bull Formula 1 boss Christian Horner has reiterated his criticisms of Mercedes’ post-race celebrations at the British Grand Prix, despite calls his team’s comments were too ‘"personal".

In the wake of the collision between Lewis Hamilton and Max Verstappen at Silverstone, Red Bull was left furious at both the accident and the way in which Mercedes and its driver cheered its success afterwards.

Verstappen himself called Hamilton’s actions "disrespectful" while Red Bull motorsport advisor Helmut Marko said that Mercedes had shown its "style" by celebrating while its rival was in hospital undergoing checks.

Earlier this week, Mercedes boss Toto Wolff said that Red Bull’s aggressive remarks after the race had gone a step too far and became "so personal".

But, in his regular post-race column published on the Red Bull site on Friday, Horner was clear that his opinion has not changed – and said it was "unimaginable" for Mercedes not to have wanted to let Hamilton know the full Verstappen situation before he celebrated his win.

“I am...still disappointed about the level of celebrations enjoyed in the wake of the accident,” wrote Horner.

“The Mercedes team were aware of the gravity of the crash with Max widely reported as having been hospitalised and requiring further checks.

“It is unimaginable not to inform your driver of the situation, moreover to protect your driver in case they do not show the necessary restraint in celebrating, particularly when it was as a result of an incident he was penalised for.” 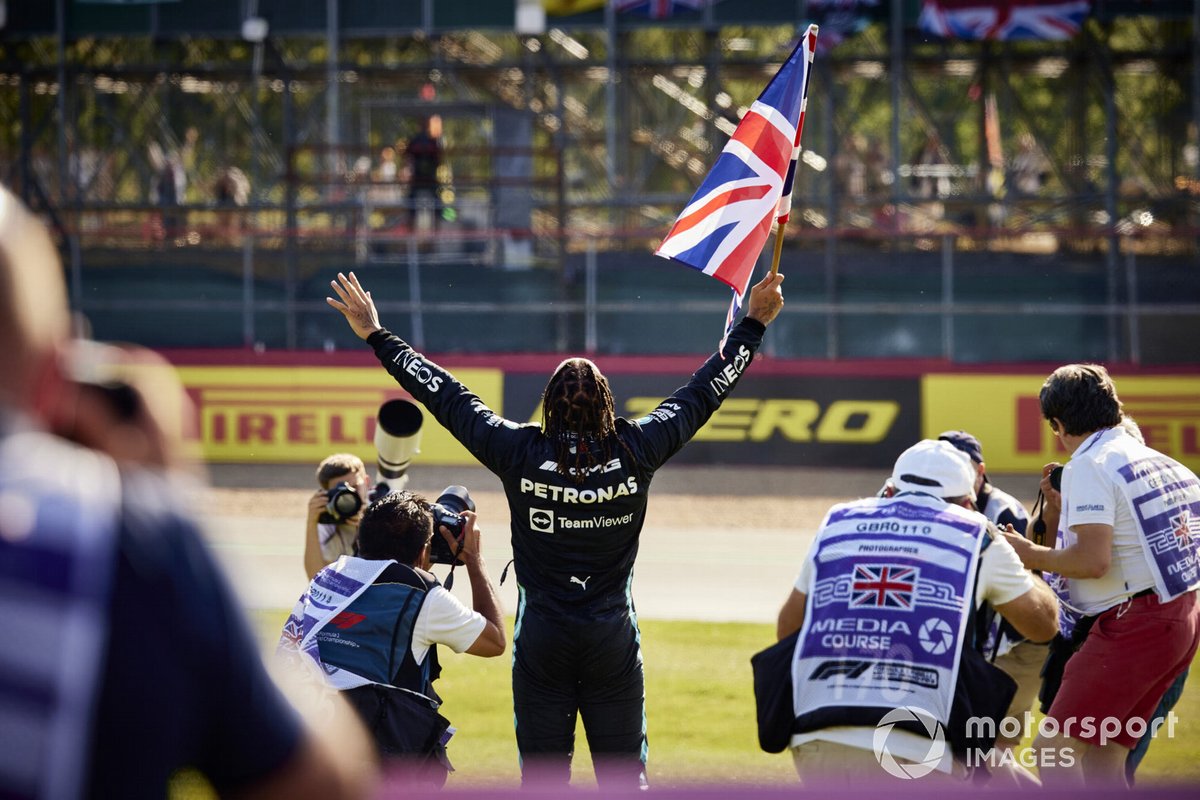 Lewis Hamilton, Mercedes , 1st position, celebrates with a Union flag after the race

Horner also did not agree that remarks that he and the team made after the collision, criticising Hamilton for his role in the crash, were too aggressive.

“I would like to respond to some comments I have seen from Toto, who is quoted as saying our comments regarding Hamilton having caused the accident were ‘so personal’,” said Horner.

“I felt the narrative that Max was being ‘overly aggressive’ at that stage was unjustified.

“I would like to make it clear. This was an on-track incident between two of the best drivers in the world. At the point in time when you have a driver in hospital and the extent of any injuries have not yet been made clear, your car has been written off and the stewards have penalised the driver seen to be responsible, it is natural that emotion comes into play, for all involved, whether you feel wronged or victorious.

“I also felt the narrative that Max was being ‘overly aggressive’ at that stage was unjustified. You only have to look at the fact Max has zero penalty points on his licence and has not been found guilty of any on-track misjudgements in recent years.

“Both drivers are of course uncompromising in their driving style, but they are both highly skilled drivers with a great deal of experience. The reality is that Hamilton has met his match in a car that is now competitive, and I agree that both drivers need to show each other respect, but Hamilton was the aggressor on Sunday.”

Despite tensions still remaining high between Red Bull and Mercedes, Horner said that he expected the incident not to affect the on-track competition when battle resumes at next weekend’s Hungarian GP.

“Hungary will be a different challenge for the car and the team and we will all be fully motivated to retain our championship lead,” he said.

“Max won’t dwell on anything from Silverstone and wants to do his talking on-track. He is determined to put this incident behind him and use it as added motivation for the rest of the season, as are we.”