Hamilton: Will Smith’s movie inspires me for own F1 biopic

Lewis Hamilton says Will Smith’s movie about tennis legends Serena and Venus Williams has inspired him to think about a biopic recounting his own path to Formula 1 success.

Made with the support of the Williams family, King Richard tells the story of how Richard Williams groomed his daughters to be tennis stars also while allowing them to grow up with a rounded education.

The film was produced by Smith, who has already won a best actor BAFTA, and is a favourite to score another success in Sunday’s Academy Awards.

Hamilton, who is a friend of both Smith and the Williams sisters, said he found the story of the latter’s rise to become the biggest stars of their sport an inspiration, with obvious parallels to his own path to the top of motor racing with the support of his family.

“I was really fortunate actually just during the process to be speaking to Serena and Venus about the whole process and how excited they were,” he said when asked about the film by Autosport.

“And of course I know Will, so really proud of what he was able to project with this film. I know he's had awards and stuff, but I was really moved by the story, I think ultimately, because I think we all of us have watched both of them rise and seen their success and trials and tribulations.

“But like all of us [we] very much don't always understand what it's taken to get there. People that tune in probably just think that they're just the best, and not understanding the commitment and the time and sacrifice that they have to put in. And so it's amazing that Will was able to highlight that.

“Behind everyone that's successful there is always somebody and I can relate to it because I have a very amazing family who, without them, I would not be here today. And I hope at some stage, I'll be able to do something similar.

“I think it's inspiring for families out there. I'm sure anyone in here that has kids wants the best for their kids, and wants to create the best opportunity and push them in the right way, but not too much. And I think that was a great showing of how you can do that.”

Hamilton stressed that the documentary he is currently making is his priority for the time being.

“We have this documentary that we're working on and I think you have to just do everything at the right time,” he said.

“The documentary is the current focus. I think stories are there to be told. I think it's important. I think there's lots that can be learned.

“And as I mentioned, for people, if you can affect and have a positive impact, if your story can have one positive impact even on one person or one family, that could be amazing.

“So I think one day I perhaps will try to do the same, maybe. Very inspired by how Will did it with his team. And with those two icons, pretty proud of them. So yeah, maybe one day.” 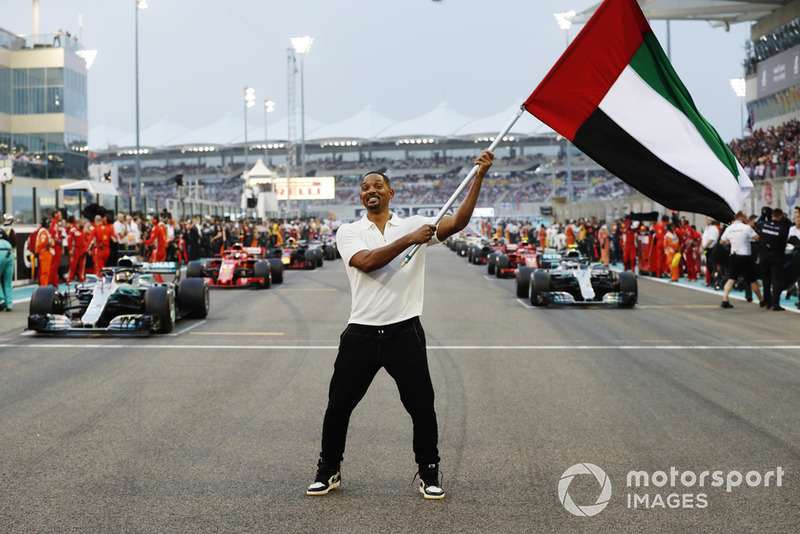 Actor Will Smith waves the UAE flag ahead of the start

Asked who he would like to play him in a biopic, Hamilton noted that he is already involved with a second film project that involves a fictional story.

“I have no idea who I get to play me,” he said. “I don't know who's out there that I would use at the moment. I'd have to do some research!

“But I'm actually going through a process right now of castings for another project that I have. And that's quite an interesting process to go through. So it's quite exciting, reading up on all these different characters, people that could fit a role that the script.

“When the script’s written, and they’re writing that character, finding someone that matches that and represents that character is quite an interesting process.”