Hamilton tried to clear Vettel on approach to the Turn 14 right-hander but backed out of the move, only to lock his tyres behind the Ferrari and miss the corner.

He dashed to the left to avoid Vettel and went down the escape road, reversing and carrying on without damage.

"Basically I let the guys [Vettel and Force India's Sergio Perez] past and they both backed off, they were going quite slow, and I was trying to recover ground," Hamilton explained.

"And I basically had my brake balance too far forward. And Sebastian tried to speed up, and then I locked up and I was going to hit him, so I had to shove to the left to avoid him and killed my tyre.

"Kind of a rookie error from myself, but that doesn't happen too often."

The high-downforce layout of the Singapore street circuit has not suited Mercedes in the past, but Hamilton ended Friday an encouraging second overall, just 0.011s behind the leading Ferrari of Kimi Raikkonen. 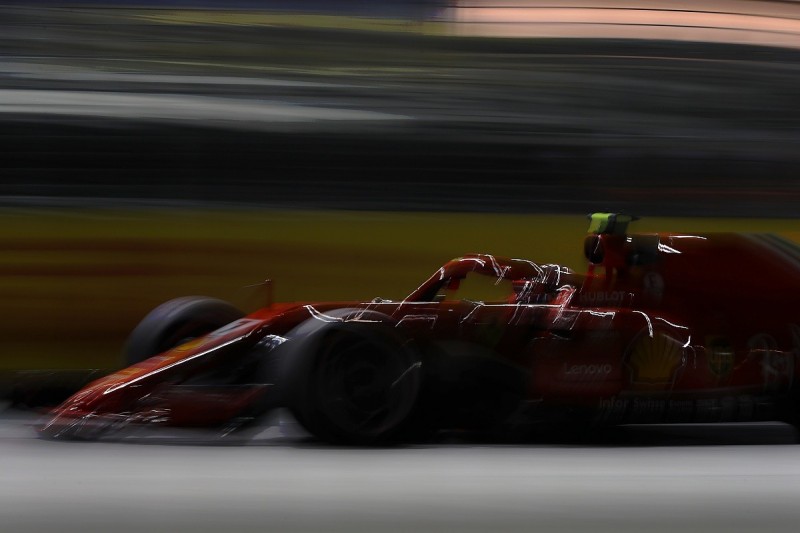 "I think we got some good results from it [FP1] - then we got into practice two with the change that we made, and surprisingly [we were] quite close to the Ferraris," Hamilton said.

"I don't know if that's real or not, we'll find out tomorrow, but the car is definitely feeling better than it has done in the past.

Team-mate Valtteri Bottas, who finished fifth in second practice as he "just didn't get a good lap together", said the big gains made by Mercedes in high-downforce trim were evident on Friday.

"There's a big difference in how much quicker the cars are. Even from the beginning of the season, it's a lot better."

Hamilton agreed that Mercedes looked to have made a step forward.

He added: "I think the guys have been working so hard back at the factory, which I really really appreciate.

"The car definitely felt better here than it has done in the past.

"Who knows how that's going to go as we start to push the car more and more, we get more and more out of the tyres, we get faster, the car flexes differently. We'll see how it goes tomorrow."

Hamilton reckoned that unlike last year, where Mercedes was roundly beaten by Ferrari and Red Bull in qualifying, this year's pole battle was shaping up to be a "three-way fight".

Bottas said that Mercedes was "not far away" from its main rivals, but reckoned Ferrari and Red Bull still had an edge.

"Seems like they are maybe a little bit ahead at this point, we are trying to get them," he said.

"We have all the possibilities this weekend to do well, but that means we need to get everything right with the car."