Max Verstappen dominated the Abu Dhabi Grand Prix to give Red Bull its second victory of the season, leading home the Mercedes duo of Valtteri Bottas and Hamilton, who finished third.

Verstappen led every single lap of the race at the Yas Marina Circuit, as neither Bottas nor Hamilton managed to get close to the Dutchman as they struggled with their tyres.

Although the result had no impact on the final championship standings - Mercedes and Hamilton both wrapped up their respective titles last month - Hamilton felt the race proved Mercedes would face a sterner challenge from Red Bull next year.

"We've obviously got a fight on our hands next year," Hamilton said following the race in Abu Dhabi.

"Without a doubt, these guys are going to be strong, as this car [Verstappen] is driving now is next year's car pretty much, and the same for us.

"I'm excited for that challenge, and that battle that we hopefully will get."

Bottas was able to clinch second place in the drivers' championship despite Verstappen's victory, ultimately finishing nine points clear in the final standings. 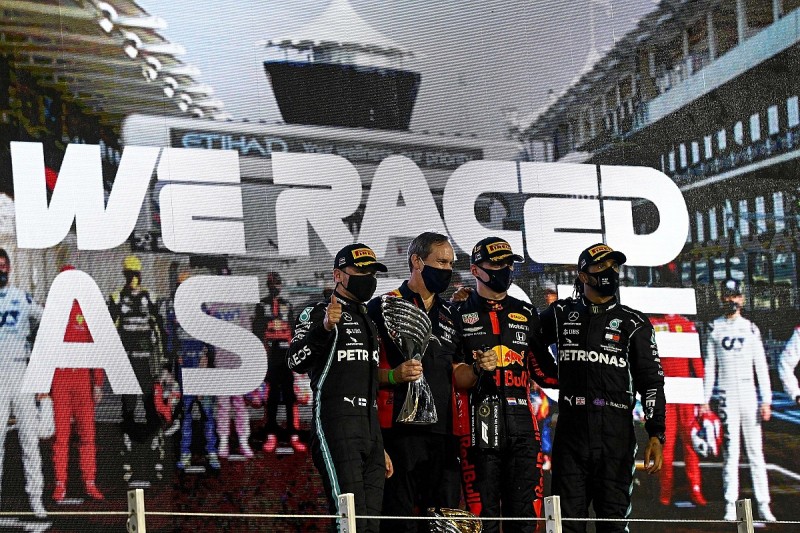 Bottas echoed Hamilton's thoughts, saying the defeat to Red Bull at the final round of the year would only serve as added motivation for Mercedes heading into the winter.

"If we think about the big pictures, now in this team, being beaten by Red Bull at the last race of the season, for sure it motivates us even more to work hard over the winter for next year to make sure this doesn't happen again," Bottas said.

Mercedes F1 chief Toto Wolff called the defeat a "slap on the wrist" for Mercedes, while trackside engineering director Andrew Shovlin said the team now had to work to understand why it was so uncompetitive at the front.

"Fundamentally today, we didn't have the best car," said Shovlin after the race.

"We need to look at whether we could have got more out of it, whether it was an issue with where we positioned it in terms of set-up or whether it's something to do with this circuit that's suiting the Red Bull.

"There's a lot there that simply we don't understand right, and that's just going to sit on the job list of things for us to get stuck into over the next week or so.

"We didn't have a difference in car pace, so in a way, it was lost yesterday, which was a close battle, but looking at it today, unless we had a car on pole, I think we would have struggled."