Lewis Hamilton believes Mercedes has made a “small step forwards” with its Formula 1 car updates despite still struggling with “harsh” bouncing at Silverstone.

Mercedes brought a raft of updates for its W13 car to the British Grand Prix, including a revised front suspension, sidepod vanes, floor, rear wings and bib wing tweaks.

The team was pushing to take a step forward in performance and ease some of the bouncing that has blighted both Hamilton and team-mate George Russell’s efforts so far this season.

Following a damp FP1 that saw teams complete minimal running and only half the field set a time, Hamilton managed to finish a second in FP2, less than two-tenths off pace-setter Carlos Sainz of Ferrari.

Speaking after second practice, Hamilton said it had been “a good day” for Mercedes and that the car was “feeling pretty good” despite the continued bouncing, particularly through the high-speed corners.

“It’s bouncing still quite a bit, not necessarily in a straight line, but through the corners, it’s pretty harsh,” Hamilton said.

“Not physically harsh, but just like in the car, on the tyres and everything. So we’ve still got work to do.

“But it feels like a small step forwards. [We’ve] just got to keep working.” 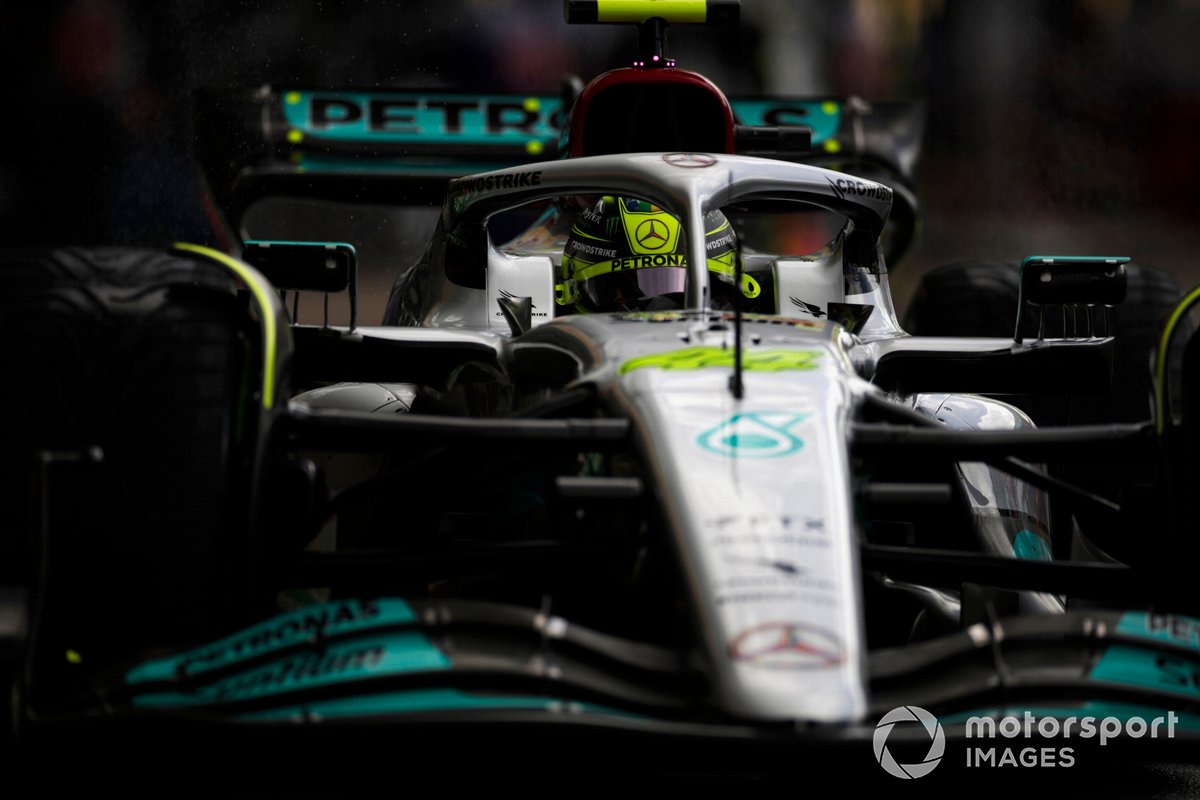 Hamilton said it was difficult to judge the shift in the car compared to the last race in Canada due to how different the circuits are, moving away from the bumpy street track in Montreal to the smoother permanent circuit at Silverstone.

“It’s much smoother, this track, much better, more like Barcelona,” Hamilton said.

“But this is the best track [to drive]. It is still hair-raising and epic to drive, and we’re fighting the car a little bit.

“Our long-run pace isn’t as good as the other guys, but it’s not miles off.”

Team-mate Russell was more upbeat about Mercedes’ long run pace in FP2, saying he struggled more on the low-fuel run compared to Hamilton who “put in a really strong lap.”

“The high fuel was definitely more promising I think, comparing to the McLaren who was on the hard, the same as us,” Russell said.

“We were a lot quicker and by the end, when the tyres warmed up, we were quicker than the Ferraris. By the end, they were tailing off, we were just improving lap after lap.

“There are some positive signs there, but there’s definitely room to improve, I’m sure.”

Russell was braced for the team to still encounter bouncing through the high-speed corners, but said the lack of porpoising on the straights was “at least one positive sign”.

“Through Copse and Maggots and Becketts, the car is bouncing around, so we need to try and understand that,” Russell said.