Lewis Hamilton says Ferrari, McLaren and Alpine's progress in Formula 1 this season has been "amazing" to see, but suggests it is not only Red Bull that has to worry.

The world champion topped second free practice for the Spanish Grand Prix on Friday afternoon, as main title rival Red Bull had a more tricky day around the Barcelona circuit.

With Ferrari's Charles Leclerc ending up as Mercedes' closest challenger on the timesheets, with Alpine duo Esteban Ocon and Fernando Alonso right behind him, Hamilton said that he was impressed with how the midfield pack were catching up.

"It's amazing to see the progress that Ferrari and McLaren are making, and even Alpine," said Hamilton. "It's fantastic to see them so strong, so that applies pressure to us also. It's not just to one group."

Mercedes looked strong on both single lap and long run pace on Friday, with team boss Toto Wolff suggesting it had been the team's best start to a weekend of the season up until now.

"I think it was our best Friday so far, so pretty encouraging," Wolff told Sky F1. "We just discussed on the pit wall, so we have 24 hours to really screw it up!"

The strong start to the weekend also makes it unlikely that Mercedes will find itself needing to split setup directions among its drivers in a bid to cover off Red Bull. 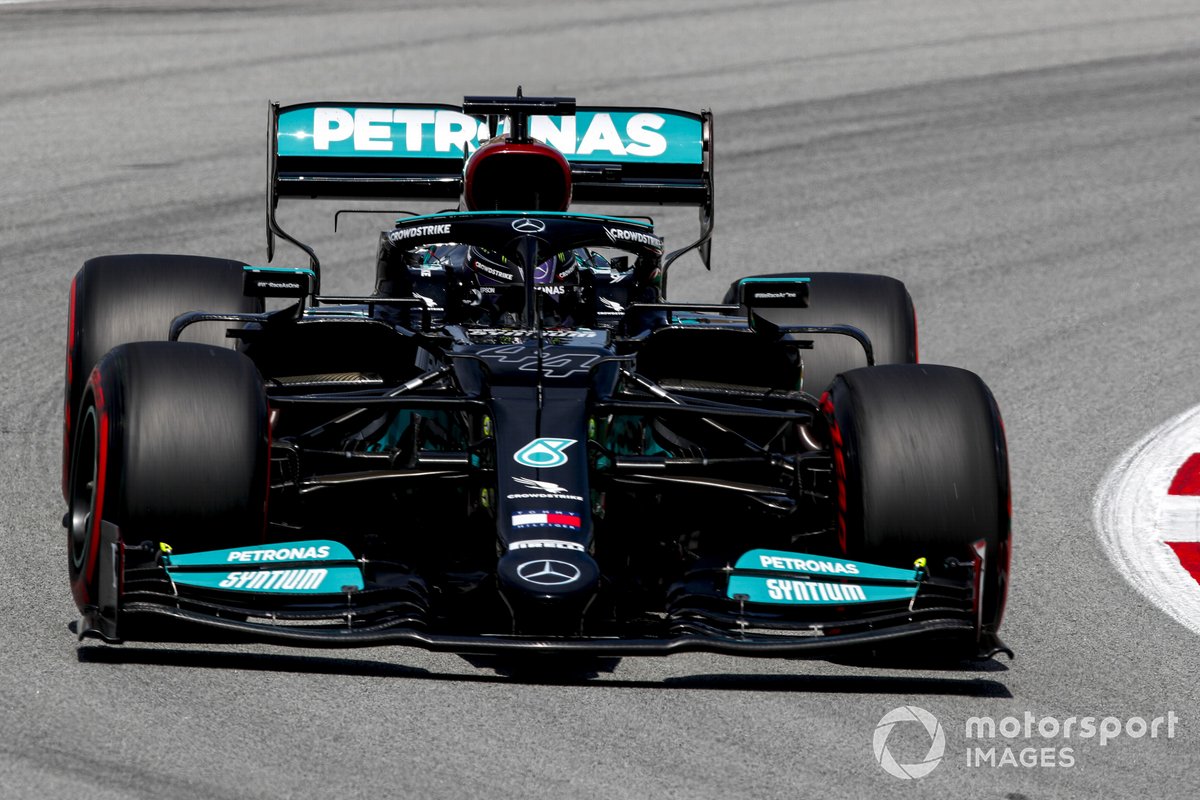 In Portugal last weekend, Valtteri Bottas and Lewis Hamilton ran different rear wing configurations, which played an important part in the outcome of the race.

Bottas said after Friday that such a split approach would not be happening in Spain.

"I think this weekend we're planning to run the same setup in terms of rear wing and everything," explained the Finn. "I think for this track, we have a pretty good understanding of what should be the optimal for both.

"I think from that side it is okay. So tonight, it's is the usual thing: trying to fine tune the setup as best as we can, because every millisecond we can find, we know it's going to help in qualifying."

Although Mercedes looked so fast on Friday, Bottas thinks that key to success in qualifying will be in managing tyre temperatures over a single lap to stop them overheating.

"I think still, with the soft tyre for qualifying, getting both axles, the front and the rear, to work perfectly for Lap 1, I think that's going to be the key. I believe again, the gaps are going to be small."