Lewis Hamilton believes he wasn't on the best race strategy for the Formula 1 Turkish Grand Prix and feels he should have either pitted earlier or gone to the end without stopping.

The Mercedes driver had climbed up to third place from 11th on the grid, having taken a 10-place grid penalty coming into the race for an engine change, and was the last of the runners to make his sole pitstop for fresh intermediates on lap 50 – while Esteban Ocon was the only driver not to stop for the entire race.

With the intermediate tyres Hamilton started on fading in performance due to heavy wear, Mercedes called him in with eight laps to go which dropped him to fifth place behind Red Bull's Sergio Perez and Ferrari's Charles Leclerc.

The majority of drivers suffered with a graining phase on fresh intermediate tyres, losing performance around two to three laps into the stint, meaning Hamilton dropped the rear of Leclerc and came under pressure from Pierre Gasly behind.

While Hamilton was able to hold on to fifth place at the chequered flag, he let his frustration be known over his Mercedes team radio throughout his final stint about his race strategy.

Speaking after the race, Hamilton felt Mercedes should have either pitted him earlier and in sequence to the drivers he was fighting or instructed him to preserve tyre life to make it to the end without pitting.

"The tyres are bald, so you don't know how far they're going to go," Hamilton told Sky Sports F1.

"And so there is definitely the worry of the life of the tyre. But also I wasn't really that fast at the end there. I was struggling at low grip. Not really sure why.

"Then all of a sudden, I have not such bad place. But I was losing performance to the guys behind.

"I think probably in hindsight, I should have either stayed out or come in much earlier. Because when you come in with eight laps to go, you don't have time to go through the graining phase of tyre on a drying track. So then I went through this whole sliding phase where I nearly lost four positions. A bit frustrating, but it is what it is.

"It felt good to be in third and it was like, 'if I can just hold on to this, this is a great result from 11th'. Fifth is worse but it could be worse." 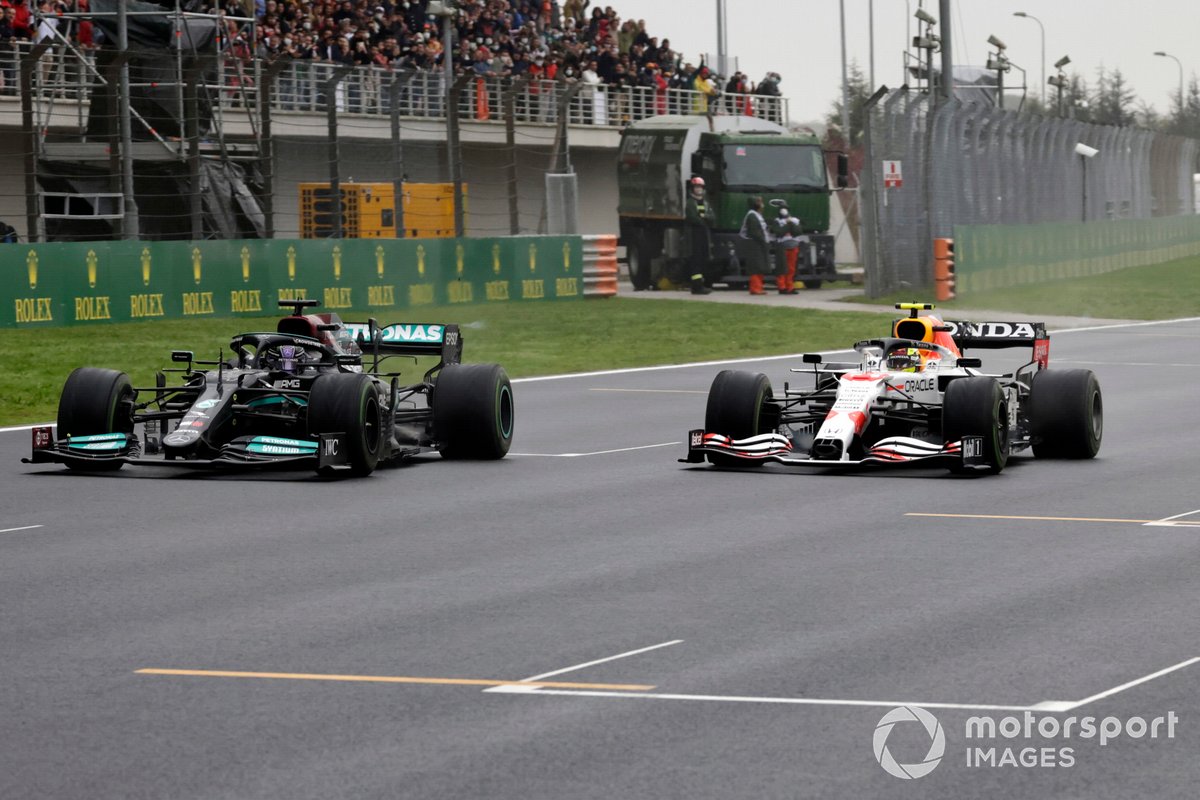 Mercedes team boss Toto Wolff revealed the team's strategy predicted Hamilton would have been caught by Perez and Leclerc had he stayed out until the finish and wanted to avoid the higher risk of tyre failure due to extreme wear.

"Yeah, DNFing and you are losing all the points, that is obviously catastrophic," Wolff told Sky Sports F1. "He would have been caught up by Perez and Leclerc in any case if we would have tried to stay out so that that would not have worked.

"The conservative play, pitting early on track behind Perez and Leclerc and trying to overtake probably the best, but the probability was not the right thing to do."