Hamilton: Ferrari needs to pick it up in Formula 1 title fight

Hamilton finished second in last weekend's Azerbaijan Grand Prix behind team-mate Valtteri Bottas to complete a fourth one-two of the season for Mercedes, the first time that feat has been managed in F1 world championship history.

Hamilton believes this is "definitely" the strongest form he has seen from Mercedes, and reckons his team is operating "in the high end of the 90s" in terms of percentage.

"Valtteri's really, clearly stepped up this year and is really happy in the car and really delivering and driving fantastically," said Hamilton.

"So, it's going to take some really great performances from both of us to out-perform each other. And that's how it should be.

"Hopefully at some stage Ferrari will be in the mix with us. I think this weekend [Baku], I do think they had the performance to be on the front row with both of their cars.

"From our data we saw that Seb didn't get a tow, for example, which is worth four or five tenths or something, so he probably would have been on pole had he got that tow and the race would have been maybe more exciting. 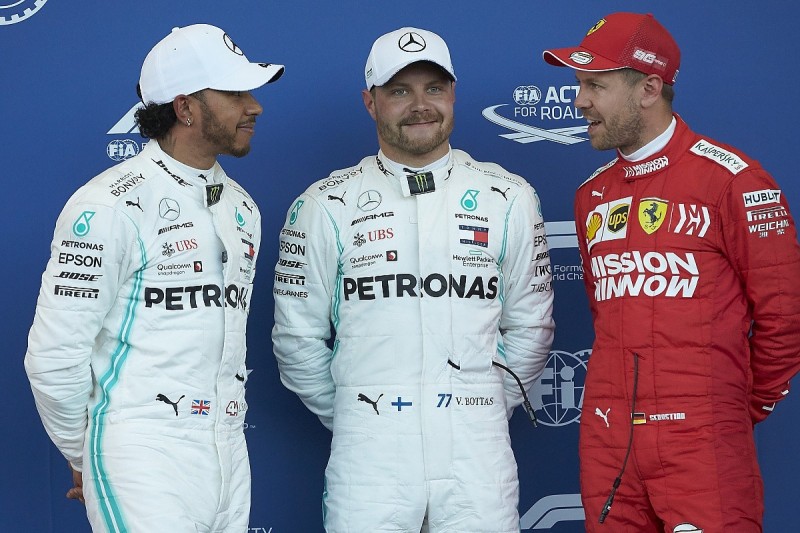 "It takes 100% to deliver throughout the weekend, which we, I think, were as close to that as possible.

"They're going to have to pick it up if they want to fight us."

Bottas leads the championship by one point, a virtue of claiming the fastest lap in the season-opening Australian Grand Prix.

Although Vettel is already more than a race win's worth of points behind both Mercedes, Hamilton said it was "far too early" to say it was a straight fight with Bottas for the title.

"[In Baku] Ferrari had the pace in practice and qualifying," said Hamilton.

"We still have to stay on our toes. We didn't bring an upgrade, and Ferrari did.

"So, it's a little bit of a surprise performance by us, because at some stage we will bring upgrades."

Defeat to his team-mate cost Hamilton the championship lead he had earned in the previous race in China.

He admitted that he "didn't deliver perfectly in all the areas that I should have". "I don't take it easy and lightly," Hamilton added.

"I'll be working hard and making sure I bring my head back strong for the next race."

Video: Did Ferrari hang Charles Leclerc out to dry with Baku strategy?