The three-time world champion tried to back Rosberg into slower cars behind, hoping his team-mate would be overtaken and fall to fourth place, which would give Hamilton the title if he held the lead to the chequered flag.

Hamilton was repeatedly asked by Mercedes to pick up his pace to make sure the team won the race, but he ignored those instructions.

"I don't know why they didn't just let us race," he said.

"There was never a moment where I felt I would lose the race.

"It's a shame, but it's quite clear their thought process. I don't really have much to say."

When asked if he found the radio contact annoying while trying to manage the race from the front, Hamilton said it was straightforward from his position on the track.

"It wasn't intense, it was pretty chilled at the end," he said.

"It might have been intense for you [watching] but it wasn't for me.

"I'm in a position where I have lost a lot of points during the season, so I'm out there fighting.

"We had won the constructors' championship so it was down to me and Nico today.

"But [the team] still felt they needed to make comments.

"I don't think I didn't anything dangerous today.

"We were fighting for the world championship, I was in the lead, I control the pace. Those are the rules.

"We'll discuss it afterwards, as we always do as a team, but we can't let it overshadow that Nico has just won the world championship." 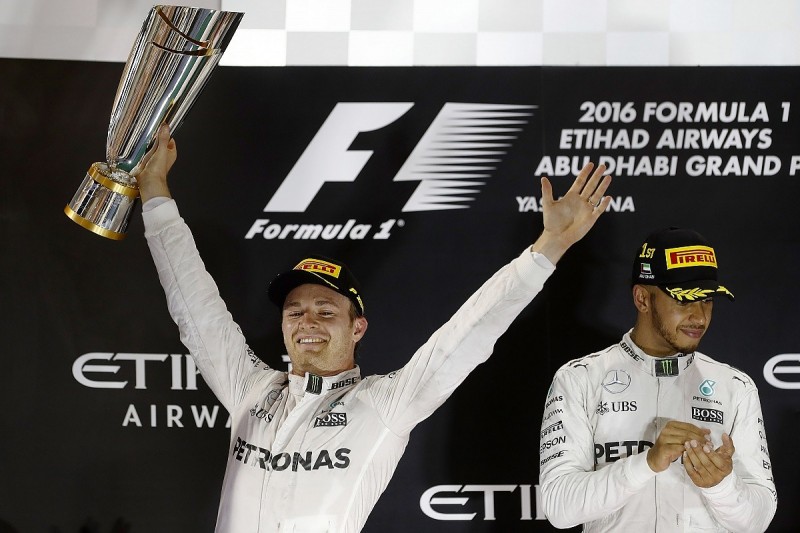 At one point in the race Rosberg asked Mercedes to get Hamilton to let him through, promising he would hand back the lead if the Briton was still second on the final lap.

When asked if he should have just tried to pass Hamilton, Rosberg said: "Lewis was using all his skill to do it perfectly so there was absolutely no way for me to get by.

"I thought about it but it was pointless - he did it in a perfect way.

Ferrari's Sebastian Vettel, who came closest to disrupting Rosberg's title hopes in the closing stages as he charged through to third due to a later pitstop to take super-soft tyres, said there was no more he could do to attack the Mercedes drivers.

"When you follow another car, you start to slide, and I was struggling with my fronts, so it was difficult to stay close," said Vettel.

"I did what I could - Nico defended well and he had a tow from Lewis.

"Without the tow, I think I could have had a chance.

"We could see what was going on - Lewis was trying to back Nico up, and my sole interest was winning the race but I couldn't get past."