Haas's performance in the Japanese Grand Prix was back to the level that yielded its best finish in Formula 1 of fifth in Bahrain earlier this year, Romain Grosjean says

The American outfit made an outstanding start to life in F1 when Grosjean finished sixth in the opening race in Australia, and then went one place better the next time out in Bahrain.

Times have been tougher since, with Haas encountering the types of operational, production and technical problems that can be encountered by a new team.

Grosjean has been unhappy with the car for several races, the balance and brakes a particular problem, but Japan represented a breakthrough after more issues in practice.

Both Grosjean and team-mate Esteban Gutierrez qualified in the top 10 for the first time, with Grosjean just missing out on points with 11th, the Haas's seventh 11th-place this season.

"The performance was similar to Bahrain," Grosjean told Autosport post-race.

"There are things we need to improve and still things that don't go quite to plan.

"I've never felt so frustrated as I am now, because we didn't deserve to miss out [on points].

"But there's so much optimism now with the new front wing and how the car worked and our pace in free air.

"Force India was a bit faster than we were in the race, but not by much, so we're fighting with the fourth-placed team in the championship." 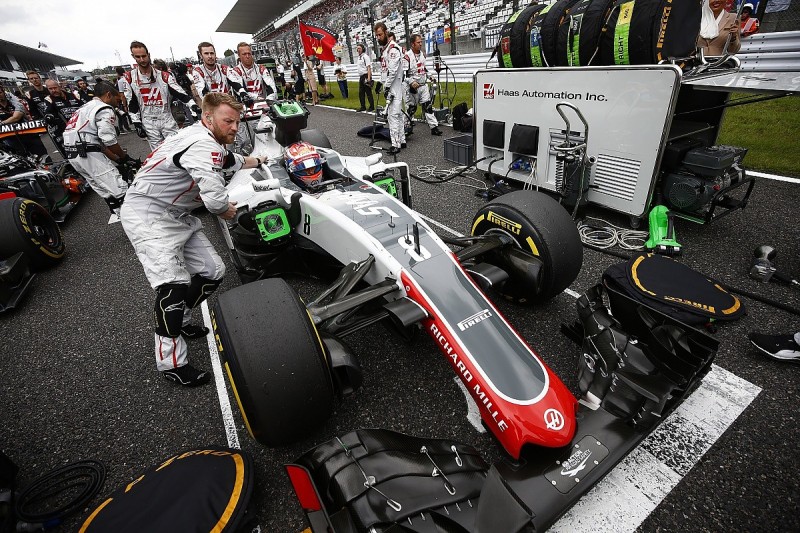 Grosjean conceded he didn't expect Haas to be challenging Force India and Williams on pure performance but says the team is getting in a position where it can start to try and do that on a regular basis.

"I never expected that," he said.

"It was an incredible start to the year and everything went right, then we went through a difficult phase.

"Then eventually we got the updates and they worked as they should have, and we know what we have to do.

"Every weekend is difficult because we start from a nowhere point and so hopefully in Austin we can start on a higher point, then focus a bit more on how we can get it right for the race.

"And hopefully have the performance in Q1 to not have to use two sets of softs then you can have a set of mediums."

Team boss Gunther Steiner was pleased the team has understood how to get the best out of a front wing that it introduced in Singapore last month.

"They are very happy with how it behaves," he said. "Romain found a better balance.

"We had this front wing for two races but we have never been able to test it properly and find a set-up or balance with it, because we always had some struggles in FP1 or FP2.

"We had a bit of a better weekend, without big mechanical failures, so we got it sorted and got some understanding for this track.

"I hope we can carry it into Austin. That is the main reason for Romain being happier."