The Frenchman returned to the paddock on Wednesday following his miraculous escape from an opening lap crash in the Bahrain Grand Prix, which required him to spend three nights in hospital while burns to his hands were treated.

Grosjean is being replaced for this weekend's Sakhir GP by Haas reserve driver Pietro Fittipaldi, but is still intent on contesting the 2020 season finale, his final grand prix for the team, if his burns heal sufficiently.

Speaking in a Zoom call with media on Friday, Grosjean explained that skin grafts to his left hand are still a possibility and if it is not possible for him to start, he would like to have a private outing to in effect get some closure on his F1 career.

"Jumping back in the car, it's been my life, and I would like to cross the finish line properly when I finish my career in F1," he said.

"I don't really want it to be over on that day. Even if the footage of having a Haas crossing at the back of the field will be less dramatic and probably less broadcasted around the world, I would like to.

"If it doesn't happen, it's okay, I will have other opportunities to cross other finish lines in the future.

"The doctors say that is difficult to know yet. The right hand 100% will be ready. 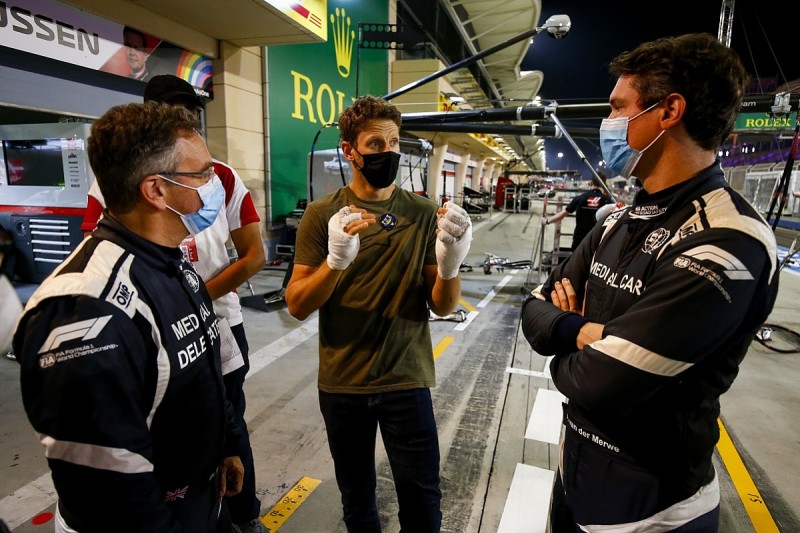 "The strength and the mobility in the left hand gets better day after day. The strength is here.

"The mobility, there's still a lot of swelling from the inflammation. So, this needs to start reducing. But grafts haven't been ruled out yet.

"I'm joking, I'm happy, but the pain of the last two days has been high. I'm quite strong with pain. I broke my right hand early this year, falling down in the kitchen.

"I haven't told anyone, but it was an open break, two bones I put myself in place, and went to the hospital, and the pain was okay, so I'm very strong with some pain."

Grosjean stressed that one of his main concerns is that a premature return may cause permanent damage to his left hand, saying while racing in Abu Dhabi was important to him, it was "not as important as living a normal life for the rest of my life".

"I won't take to risk losing mobility of my left index and left thumb for the rest of my life, just to go to Abu Dhabi," he said.

"The story would be beautiful to go to Abu Dhabi. If I don't, I'll call every single F1 team and see if anyone would offer me a private test in January or so, to jump back in the car, and have 10-15 laps to myself.

He added that the target of an Abu Dhabi is helping him to "keep positive and keep moving" as he recovers, revealing he felt "fine" after looking over the wreckage of his car. 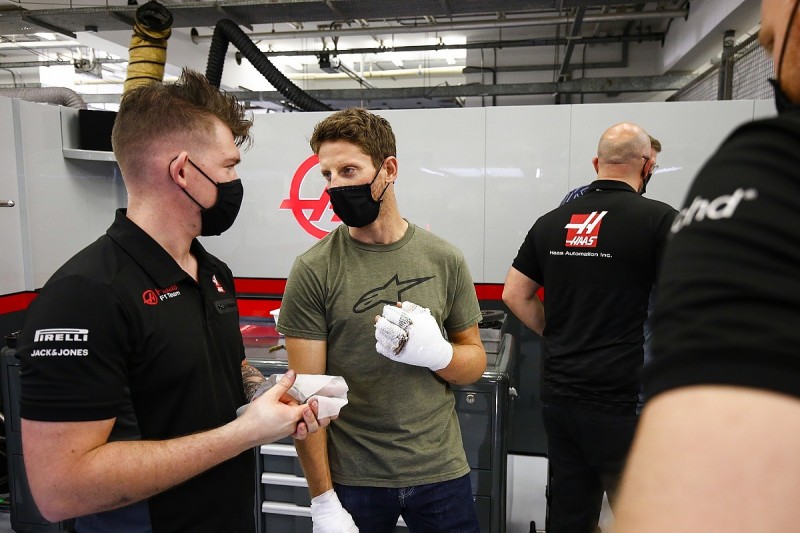 "The first step yesterday was to go to the track, and one of the first things I did was go to the car, and I looked over the halo and cockpit just to see if there were any strange feelings, panic, scare moments, and it was fine," he said.

"On Sunday night the first video call I did with my wife and kids, and my dad was there, I said, 'I will race in Abu Dhabi'.

"You can imagine their reaction, they weren't very impressed with me! And I won't blame them, and I always understand that they don't accept it.

"If it doesn't happen, I'm alive, I will have plenty of opportunities in the future.