But Verstappen's speed was overshadowed by a problem he suffered on-track downshifting and he was forced to spend 20 minutes in the Hockenheim pits while his Red Bull mechanics solved the issue.

It has been a day of contrasts for Red Bull. In the morning Verstappen's team-mate Daniel Ricciardo was fastest, but he will start the German GP from the back of the grid with power unit changes resulting in numerous grid penalties.

Twenty five minutes before the end of practice two, pacesetter Verstappen reported on the team radio there were problems with his engine, saying: "there is a lot of noise on the downshift", and returned to the pits.

But he did manage to return to the cockpit of his Red Bull with just three minutes of the session remaining.

Ricciardo focused on his race set-up, with his penalties making qualifying redundant.

He was only 13th fastest and nearly had contact with Sergey Sirotkin's Williams with half an hour to go when the Russian closed the door as Ricciardo attempted to overtake on the inside at the hairpin.

Ricciardo also had a quick spin at the tight Turn 8 left-hander in the following complex.

Second practice took place in baking sunshine with the air temperature reaching 31 degrees C and all the teams using the time to evaluate how the differing compounds coped with the hot conditions.

Halfway through the session, Valtteri Bottas was the first to set a new lap record but his team-mate Hamilton immediately eclipsed him by 0.079s to record a 1m13.111s.

Five minutes later, Verstappen lowered the lap record further with his pacesetting 1m13.085s run, despite traffic in the stadium section at the end of his quick lap.

Hamilton and Bottas stayed second and third behind Verstappen after that. 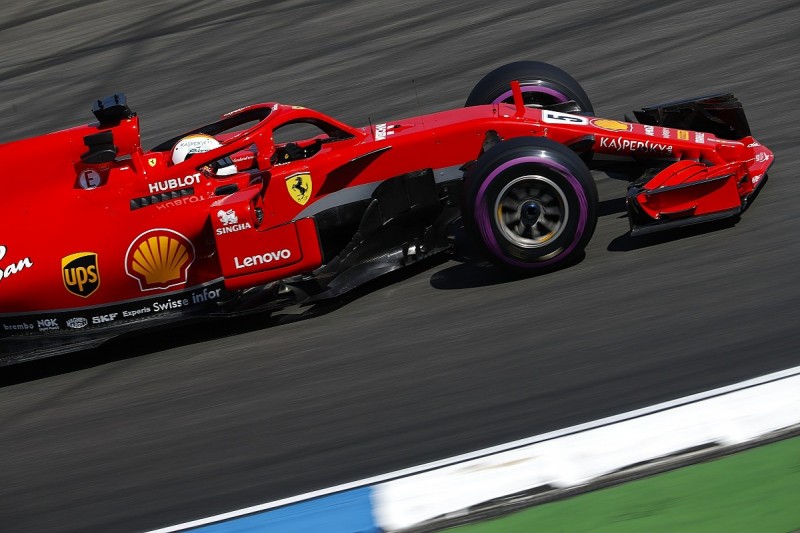 The two Ferraris ended practice in fourth and fifth, with Sebastian Vettel ahead of his team-mate Kimi Raikkonen, followed by the two Haas machines of Romain Grosjean and Kevin Magnussen in sixth and seventh then Sauber's Charles Leclerc.

Ricciardo's moment with Sirotkin wasn't the only near-miss of practice. Early on, Esteban Ocon was close to making contact with Stoffel Vandoorne's McLaren in Turn 9 as a number of drivers on quick laps encountered slow-moving cars with drivers preserving their tyres.

Just nine minutes in, Haas's Magnussen was slow in the Turn 6 hairpin, appearing to slightly delay Fernando Alonso who was on a quicker lap. The pair were at loggerheads in the closing stages of the British GP a fortnight ago, leading to Magnussen to say on Thursday that Alonso "exaggerates" like the Brazilian footballer Neymar.

Nico Hulkenberg ended the day ninth for Renault. During practice he reported a "vibration in the steering column" that the team suspects was a tyre balancing issue and he picked up a lot of blistering on his left-rear tyre.

Ocon completed the top 10, while the McLarens and Williams cars finished at the bottom of the timesheets.