Gasly suffered a driveshaft failure after charging from the pitlane to sixth, and his stopped car triggered a virtual safety car just as Verstappen was mounting more pressure on Sebastian Vettel.

After the VSC period ended Verstappen struggled with tyre temperatures and fell away from Vettel, but Red Bull had also told him to back off to avoid a potential repeat problem.

"We struggled a little bit to get the warm-up going again, but after the failure that we'd seen with Pierre we didn't want to take too much risk," Red Bull team principal Christian Horner explained.

"It was a driveshaft failure and we don't know why, so having seen that we didn't want to take any unnecessary risks with Max.

"His third P4 in a row, it's always frustrating when you're the first place off the podium, but I thought he had a strong race today."

Verstappen was given a message to avoid the kerb on the exit of Turn 16, where he had run wide earlier in the race.

Asked by Autosport if there were any other measures, Horner said: "We turned things down a little bit so as not to put as much energy through the drive lines.

"Obviously up until the VSC he looked in pretty decent shape."

Verstappen felt the main handicap in his podium chase had been the way his tyres lost temperature around the VSC period.

"I was catching up seven/eight seconds over that stint, so that was all good, but as soon as we got to the virtual safety car, I lost a lot of temperature," said Verstappen.

"It seems like our car is a maybe a bit more sensitive to that, or we're just not on top of the tyres.

"I don't know - otherwise we would've of course fixed that. 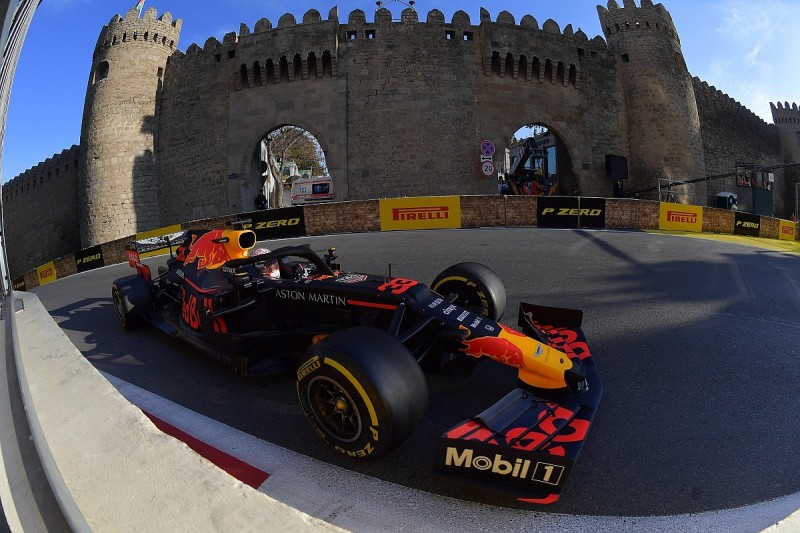 "It was a lot more difficult after that, I was just sliding a lot, and around here if you don't have the grip, you can't take the risk into the corner and you lose a lot of lap time."

He believes the issue was specific to the Baku track conditions rather than being a fundamental Red Bull weakness.

"I think it's just something on this track where it's already very slippery, it seems like we are just not on top of it yet," said Verstappen.

He finished 5.7s behind Vettel and almost a minute clear of the second Ferrari of Charles Leclerc, who stopped for new soft tyres after the VSC to set the fastest lap of the race.

Horner said chasing that bonus point was not an option for Verstappen, which was another reason to remain cautious following Gasly's failure.

"If it had been a normal safety car he would have stopped," said Horner when asked how strongly the team considered pitting Verstappen under the VSC.

"But with it being a VSC it didn't really make any sense.

"He didn't have any new soft tyres available to go for the fastest lap.

"So looking at it with the reliability, we thought did we really want to put an extra load through the driveshaft for one point, which might cost us 12?

"It didn't make any sense."