Raikkonen crashed out in the treacherous wet conditions at Interlagos at the start of lap 20 of 71, catching standing water on the start-finish straight that pitched him into the wall.

The Finn claimed there was "zero" he could have done to prevent his accident, particularly as he feels Pirelli's wet rubber is not up to the standards of the Michelins he used at McLaren in the mid-2000s.

"Obviously it depends on the circuit, on many things, but if I'm comparing it to 10 years ago or 12 years ago, those tyres could handle this kind of water with no issues, no aquaplaning.

"The aquaplaning is the big issue. It looks like if you have a little bit of standing water there's zero grip."

Sauber's Marcus Ericsson crashed out eight laps before Raikkonen after aquaplaning into a barrier and coming to rest in the pit entry.

Though he has only experienced Pirellis in F1, the Swede agrees with Raikkonen that previous suppliers' wet tyres were superior. 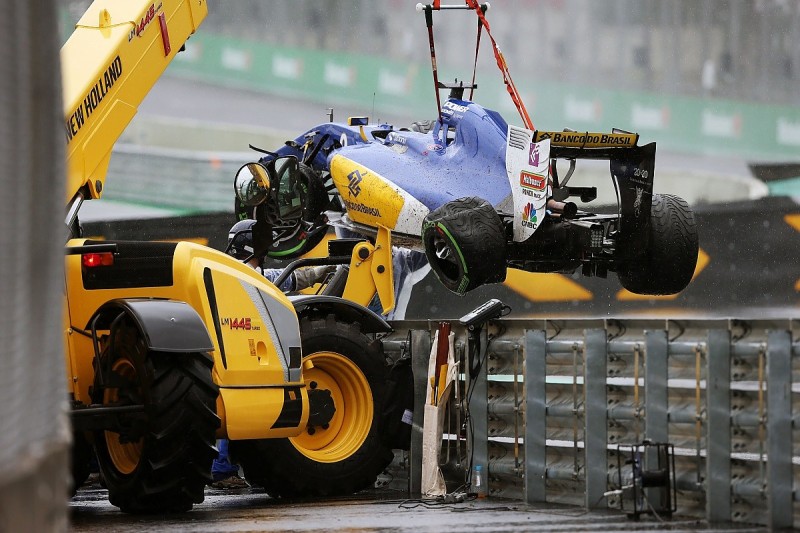 "For some reason in the last couple of years, when there is standing water on tracks, we are struggling a lot to drive, whereas 10 years back people were driving in these conditions without a problem," said Ericsson.

"There is a lot of room for improvement on the wet tyres because in the corners they are good, but it's just on the straights when there is standing water we should be able to go through that.

"It was raining, but it wasn't torrential. We should be able to race without red flags and safety cars, we've done that in the past, but now it's not possible because of the aquaplaning on standing water.

"So there is a big challenge that they [Pirelli] need to sort out so we can go through standing water without drivers losing the car and becoming a passenger.

"You can be lucky, like Max [Verstappen, who caught a spin in the same place as Ericsson], and you keep it out of the wall.

"Or you can be unlucky like me, Kimi, Romain and [Felipe] Massa. We all crashed more or less in the same place, where it is pretty much not a corner, so for me that is the disappointing thing."

Romain Grosjean, who lost his Haas on the lap from the pits to the grid, described the full-wet tyres as "terrible".

"We need to get better tyres for the wet because losing the car in a straight line is something quite bad," he said.

"It shows the extremes are very poor tyres, there is no grip and you have to take a huge amount of risk."