The Ferrari 312 T3, which the 1997 world champion has driven once before at the 2004 Goodwood Festival of Speed (above), will sit in front of the F1 grid before Sunday's race, where the ever-present 'Salut Gilles' wording at the start finish line has been altered to include '40 ans' for this weekend.

When the drivers' parade begins, Villeneuve will lead the field of Austin Healeys carrying the 2018 drivers around for a full lap of the circuit.

"It's great because it's the first time I will lead in a Formula 1 car in Montreal!" Villeneuve joked at the announcement, which took place on the start/finish line of the Circuit Gilles Villeneuve on Thursday.

"As time passes, [the memory of Gilles] has more meaning, because you see what it represents, to the fans, to the people, to the history of the sport. And now, having kids myself, I feel that more as well.

"I've driven this car at Goodwood, so I've sat in it already. It's different, it's like sitting in a tuna tin can, basically.

"You can see your feet, then somebody puts a bit of plastic around you, which is the shell [bodywork], and you feel safe, but it's just plastic.

"But it's still amazing how advanced the cars were already back then." 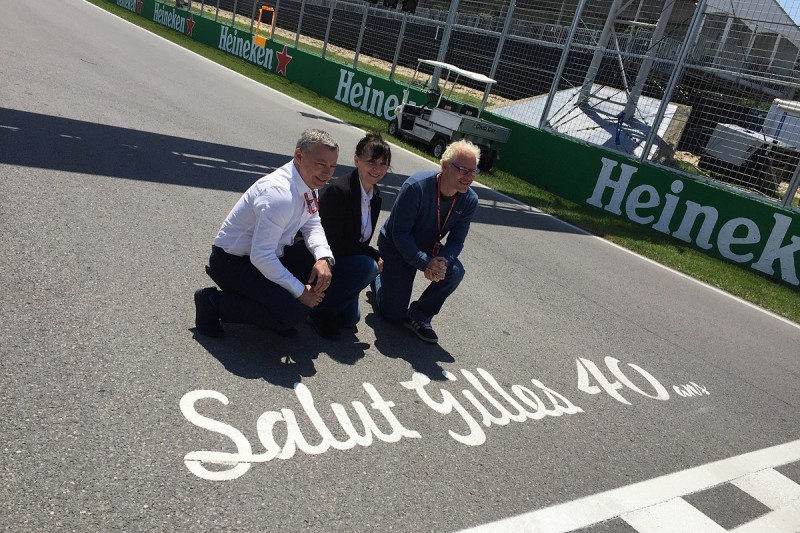 Villeneuve was joined by his mother, Joann, and Canadian GP boss Francois Dumontier, who helped put the demonstration together for this weekend.

Joann Villeneuve said: "It's really an honour for me this weekend, after working so hard with the help of Francois to get the car that Gilles won with here in Montreal for this race.

"It's really special, it brings back a lot of emotions, something that's extremely nice for me.

"If we had written [the 1978 win] as a script it would have been refused because it was so unbelievable.

"That has remained with me, just to see that first win, knowing the season had been so difficult for him, and the team had started to get nervous about Gilles.

"For him to win made all the difference in the world for his driving career. All of it mixed together, it was a magic moment."

Jacques' best result in the Canadian Grand Prix was second, which he took at the first attempt in 1996.

Although he never led a lap at the Montreal circuit on merit, he did lead eight laps of that race after race leader Damon Hill made a pitstop, until he came in for his own stop.