Vettel headed a one-two for Ferrari after jumping team-mate Kimi Raikkonen in the final third of the session, but his former F1 team will head into qualifying with serious concerns.

Ricciardo pulled up just after the halfway mark in the one-hour session, exiting the penultimate corner with his Red Bull belching bursts of flame and plumes of smoke.

A virtual safety car was deployed as the marshals dealt with Ricciardo's latest Renault-induced disappointment, which comes less than a week after he retired from the Bahrain Grand Prix with an energy store failure.

Red Bull team boss Christian Horner told Sky Sports that "disappointing is probably an understatement" after the latest problem on only the third weekend of the season.

"I think we've got a suspected turbo failure," he said. "That is what the analysis is at the moment. Whether its damaged the combustion engine only time will tell." 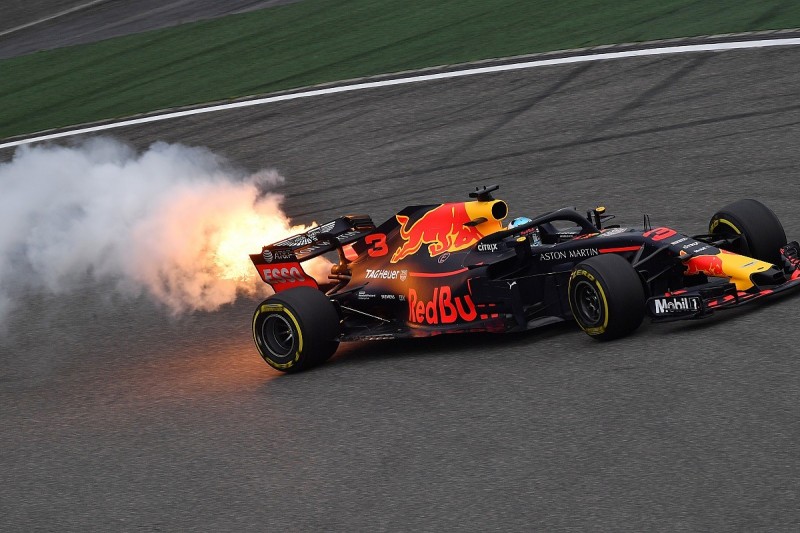 Ricciardo's team-mate Max Verstappen ended up fourth-fastest, splitting the two Mercedes, but also aired concerns to his team over the radio.

He declared "every time I push to the limiter I lose speed" and compared it to his feeling in Azerbaijan last year, when he eventually retired with an engine failure.

Heavy rain after Friday practice, which continued overnight, and a cold and overcast morning made track conditions poor at the start of the session, although there was no delay in cars hitting the track.

Raikkonen was first to set a lap time and Nico Hulkenberg briefly held top spot for Renault before speeds rapidly increased and Ferrari established itself at the head of the leaderboard.

The two Ferrari drivers both had spells on top before the halfway point of the one-hour session, with Vettel holding the advantage at that point on a 1m33.689s.

Raikkonen then surpassed Lewis Hamilton's Friday benchmark on a 1m33.469s, before Vettel posted a 1m33.018s with just over 15 minutes to go. Hamilton had a messy session, twice running onto the wet astroturf on the exit of the Turn 9 and 10 double left-hander.

His second trip wide was more dramatic, running all four wheels off-track on the exit of Turn 10 and spinning wildly before coming to a rest facing the wrong way on the edge of the circuit.

Verstappen then went fourth, despite his engine concerns, just behind the lead Mercedes of Valtteri Bottas, while Kevin Magnussen took advantage of the absent Ricciardo being shuffled back to 14th to take sixth for Haas.

Why 'party modes' on Formula 1 engines are a necessary evil