Formula 1 urged to think 'seriously' after spate of unsafe pitstops

McLaren was fined €5000 after the second practice session for this weekend's Chinese Grand Prix after releasing Stoffel Vandoorne with an improperly fitted right rear tyre.

This is the fifth unsafe release in three races, after both Haas drivers retired from the opener in Australia and Kimi Raikkonen suffered two incidents in Bahrain, including one in the race that left a pit crew member with a broken leg.

McLaren also had a wheel incorrectly fitted on the first day of pre-season that ended with it losing the wheel completely after the part that held the wheel's retention system broke.

Green believes how the teams are handling the pitstop process is to blame and said the FIA "needs to look at it".

He added: "Teams need to look at how you end up releasing a car in a practice session without a nut done up. For me, that needs some serious thought."

FIA race director Charlie Whiting suggested the issues were "less and less a coincidence" after the brace of Haas problems in Australia and Ferrari's double error in Bahrain.

Any correlation between the incidents appears to be limited to errors in the process.

Haas's problems were down to mistakes re-fitting the wheels, as was Raikkonen's first unsafe release in Bahrain and Vandoorne's in China.

Raikkonen's in-race problem, which had the most severe consequences, was caused by the wheel not coming off at all and the re-engagement of the gun on the unchanged wheel confusing Ferrari's automated system. 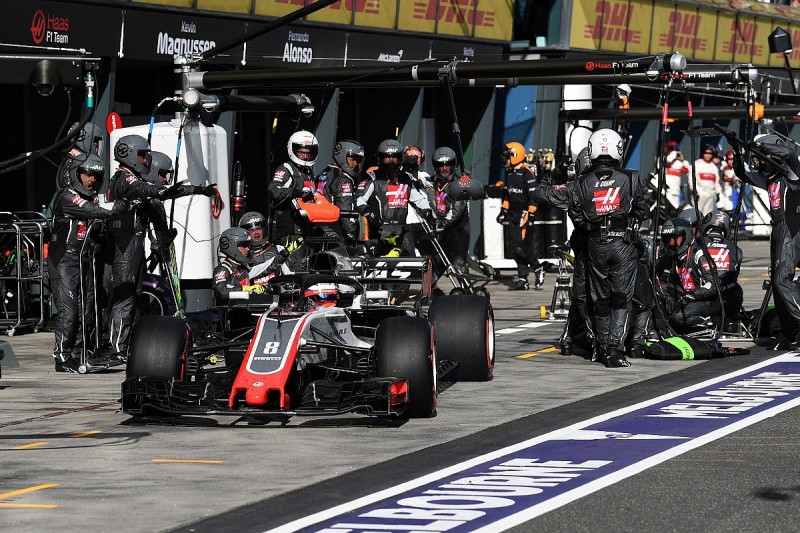 One theory is that the wheel nuts could be harder to fix or remove this year, but Green said this is not the case.

The only change to the dual retention system, which protects the wheel from coming off completely if the nut is not properly attached, has been the beefing up of the tests it must undergo to prove it can withstand sufficient forces.

Haas driver Kevin Magnussen said the FIA did not need to investigate the unsafe releases because it was simply a matter for teams to "back off and get into a safer area".

Renault chief technical officer Bob Bell also believes the increased concentration of problems is because teams have reached the limit of what is achievable during a pitstop.

"We're all constantly working on our hardware to reduce pitstop times so you just keep nibbling away at margins," he said.

"You reach a point where sometimes you just fall over the edge occasionally."

Green said it was wrong for teams to be releasing cars unsafely in practice because "there is no big time pressure to put the nut on", but Bell disagreed.

"There's no point in practicing if you're not practicing at race pace," Bell said.

"That's what all the teams do. It just means that occasionally it bites us."

'Fundamental' issue with Force India's F1 car is holding it back

Why 'party modes' on Formula 1 engines are a necessary evil