Sergio Perez has defended his decision not to allow Force India Formula 1 team-mate Esteban Ocon through to challenge for a podium finish in the Canadian Grand Prix.

The Force India drivers spent a long period of the race challenging Red Bull's Daniel Ricciardo for third place, with Ocon believing he had a better chance than Perez of taking third because he was on fresher tyres.

But Perez refused to move over to allow his team-mate a shot, saying he was pressuring Ricciardo and waiting for him to make a mistake.

"I spent the whole race behind Daniel, in his DRS window - I was really close to him," Perez told TV crews after the race.

"All I needed from Daniel was a single mistake, a single lock-up, and he basically drove a perfect race.

"When the team asked me to let [Ocon] by, we were going to lap some cars, so I asked them to give me the chance because we had some traffic and that's all I needed, I was always in [Ricciardo's] DRS zone.

"In the end I had 40 or so laps to put the move on Ricciardo and he didn't make a mistake.

Perez believed he defended fairly from his team-mate and that if Ocon had the pace, he could have passed.

"Esteban had those laps behind me on a much fresher tyre, and he was never close enough to me to make a move."

As well as failing to beat Ricciardo, the Force Indias were both passed by a recovering Ferrari of Sebastian Vettel in the closing stages, dropping them to fifth and sixth respectively. 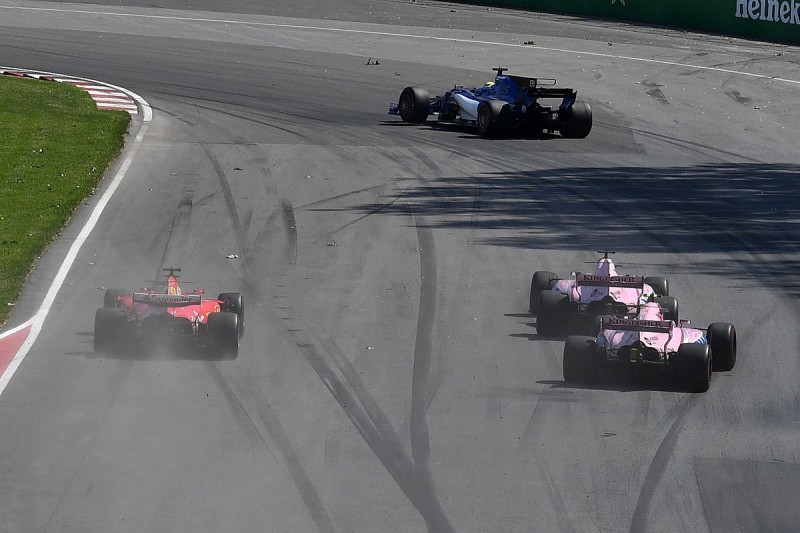 "In the end we all finished where we deserved to finish," added Perez.

"I knew that the Ferraris were coming quick, and I was struggling for tyre grip.

"But I was thinking the podium could be mine. The strategy for me wasn't ideal [having stopped relatively early] but I tried my best."

Perez also suggested Force India should have systems in place agreed in advance for similar situations in the future.

"This is the first time In my career I find myself in this situation," he said.

"We are all a team, I work for Force India, and I want the best results for them.

"We must come up with a plan, with a solution, in case we find ourselves in that position again - we should know what to do."

Ocon says the team will discuss matters internally, but said he was frustrated with Perez during the race.

"I was frustrated more with the move he did, which wasn't fair," he said.

"He did a very late move at very high speed which could have left us both out of the race. That would have been horrible for me, him and the team as well.

"It was a great race, just a shame I didn't get the chance to pass Ricciardo.

"I think I had the pace by far to do it, so the podium was possible for me today.

"That's racing sometimes, we have to discuss what happened in the debriefing room.

"My time will come."