As its car emerged in the pitlane at the Marina Bay circuit on Thursday, it was spotted with more than 30 winglets situated at the top of its engine cover.

The aim of these will be to help increase load at the rear of the car, as well as direct the airflow to the T-wing and rear wing in a better way.

Force India's T-wing is also a more aggressive version than had been spotted before, with the three separate elements now featuring double planes - with strengthening mounts in-between the two elements.

With downforce at such a premium around the Marina Bay circuit, Force India's solution is unprecedented and shows the outfit is not easing off despite its comfortable points position in the constructors' championship.

Despite its warring drivers Sergio Perez and Esteban Ocon, Force India has racked up 113 points this season and is 58 clear of fifth-placed Williams.

The Force India developments are likely to be one of several new concepts that teams will try out as they bid for a maximum downforce approach to the Singapore GP weekend.

Mercedes has been spotted with a revised shark fin as well in Singapore, without the cut-out section in the tail that has been used up until now.

The German manufacturer's British-based team has been vulnerable in Singapore in the past, struggling hugely in 2015 and only narrowly defeating Red Bull last season. 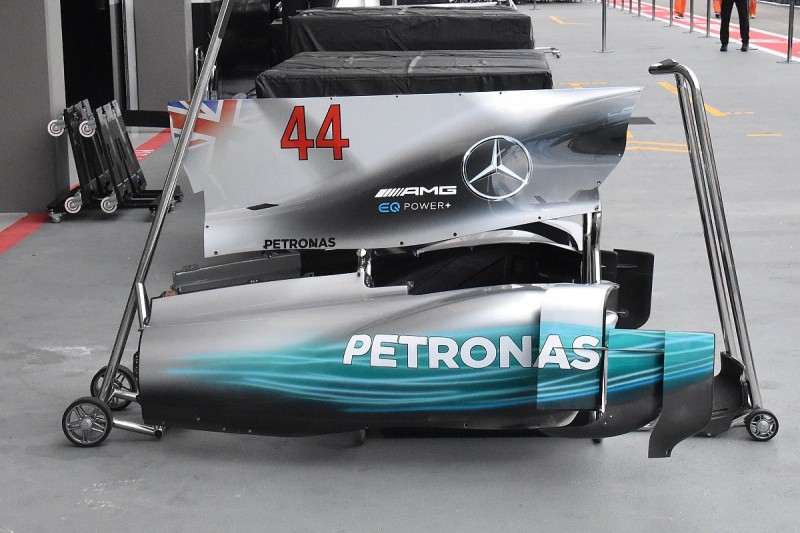 To help the overall efficiency of the rear wing, the angle of attack of the airflow onto the leading edge is very important and this is what Force India is trying to improve.

With the bulk of the car in front of the rear wing, it is difficult to get the airflow to turn back down onto what is called the separation point.

The more of this you can do, the higher the airflow separation point on the rear wing will be. A higher separation point effectively means a more cambered - or banana shaped - wing, which will produce more downforce.

This small row of wings angled downwards will help turn the airflow towards the rear wing leading edge.

It is the opposite to what Mercedes was doing earlier in the season when they had an cooling exit in this area.