With the long-awaited arrival of the B-spec car not due until late June in Austria, Force India is being forced to make the most with the limited resources at its disposal.

Drivers Sergio Perez and Nico Hulkenberg could do no better than 13th and 15th in the last F1 race in Spain, but Fernley thinks the possibility of unpredictable situations in Monaco and the following Canadian GP will help.

"I'd like to see us try and do a little bit for Monaco, if the dice roll our away," Fernley told AUTOSPORT.

"As we all know it is a bit of a lottery there. You do need luck.

"Monaco has always been lucky for us, like with Bahrain, so hopefully that luck stays with us.

"So I can see an opportunity there, and I can probably see a bit of an opportunity in Montreal, and then hopefully we will get close to running the B-spec.

"So whether the B-spec is as planned ready for the test, or whether we can bring it forward to the race, we will see.

"But whatever happens, from then on it will help us."

Fernley added that Force India had always been braced for a struggle at Barcelona, where both cars went out in Q1.

"That gap to our rivals has been there since day one," he said.

"But the Circuit de Catalunya is a track that really hurt us, and the race highlighted it. It was similar in Malaysia and China.

"Where we have had opportunity, and the opportunity was there in Australia and Bahrain, we've managed to deliver.

"Australia was better than we thought, and Bahrain was what we aimed for.

"In Barcelona, our race pace was better than we showed in qualifying, but we could do no more than what we achieved."

2008: In the days when the team was struggling to escape the back row of the grid, Adrian Sutil got up to a remarkable fourth in a wet/dry race, then was left heartbroken when Ferrari driver Kimi Raikkonen slid into the back of him.

2010: Sutil and Tonio Liuzzi gave the team its first double points finish as Force India with ninth and 10th (pictured below).

2014: A second straight Monaco top five for Force India as Nico Hulkenberg took fifth, albeit a lap down. 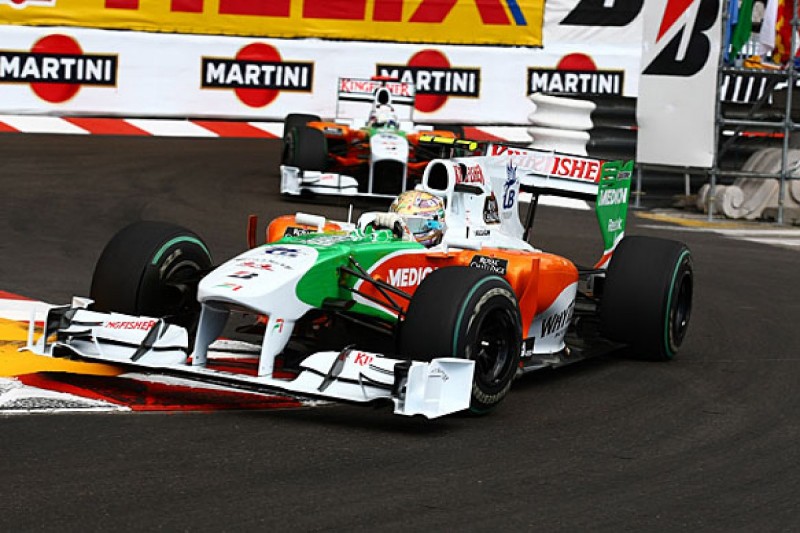