They had previously been ordered not to battle in 2017 following a string of incidents.

In Singapore the pair touched on the exit of Turn 3 on the first lap when Ocon tried to go around the outside, and Perez moved over and put Ocon into the wall.

Szafnauer had reminded both drivers before the Belgian GP - where they both started in the top four and the revamped team was restarting on zero points - of the importance of not coming into contact with other.

"I didn't remind them here, maybe I should have done,' he told Autosport.

"But they know it now, and again they're not going to race anymore if they can't do it.

"There wasn't any room, Checo [Perez] should have given him room, and Checo had plenty of room.

"Esteban put himself in a position where if Checo moved over, he couldn't do anything about it.

"But your team-mate shouldn't do that to you. If it's another car, then you shouldn't have put yourself there. 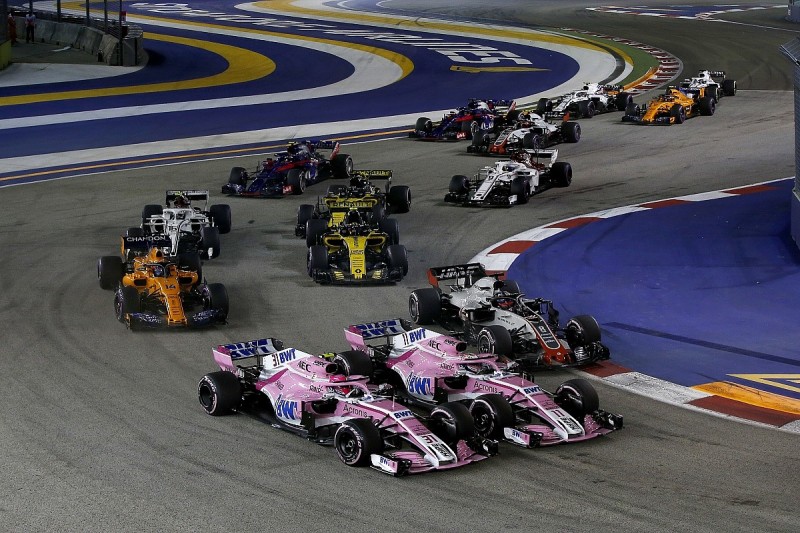 "But if it's your team-mate, you've got to have that respect.

"It's just a matter of fact, it is what it is. And next race we'll tell them the rules, and it won't happen again, it's that simple."

The FIA stewards decided to take no action over the collision.

"They looked at it and said racing incident, and I'm sure it was, if they weren't team-mate," Szafnauer said.

"But from my perspective, you leave your team-mate room, the team comes first. And he had room to leave him."

Asked if Perez had accepted he was at fault, Szafnauer replied: "I think so. He's got to look at the footage, it's pretty clear."

Although the two drivers have been involved in incidents in the past this was the first one under the team's current owner Lawrence Stroll, and Szafnauer was seen in discussion with the Canadian after the flag.

"As a team owner or team principal or a manager, once they're out there, you can't control them," Szafnauer added.

"You've got to do the controlling here, before you go out. So he's in the same position.

"Once they're out there they've got the wheel, so we've got to control them before that.

"It hurt us. We should have scored at leat 10 today, and that means McLaren would have been behind us. It hurt us by a good 10-12 points."