Sergio Perez fell from eighth to 14th on lap one of last weekend's Chinese GP amid a brush with Fernando Alonso that also held up the second Force India of Esteban Ocon.

That came a week after Perez was badly delayed by a first-lap collision with Brendon Hartley in Bahrain.

Ocon's 10th place at Sakhir is Force India's only point of 2018 so far, leaving it ninth in the constructors' championship at present.

"We've had two races where the first lap has hit us hard," Fernley told Autosport.

"The difficulty is that once you go back like that, with the midfield competition so tight, it's very difficult to recover. I think that's the key to it.

"Alonso and the Renaults have done a good job clearing that trouble in the first laps, and are getting the benefit of it.

"The pace of everybody is so close it doesn't take much to really push you right the way back.

"It's just how it falls. If you get out of position from your starting place it's very difficult to recover if everybody finishes."

Ocon and Perez ended up 11th and 12th at Shanghai, but Fernley felt one of them would have still scored if they had been able to clear Romain Grosjean quicker in the final part of the race. 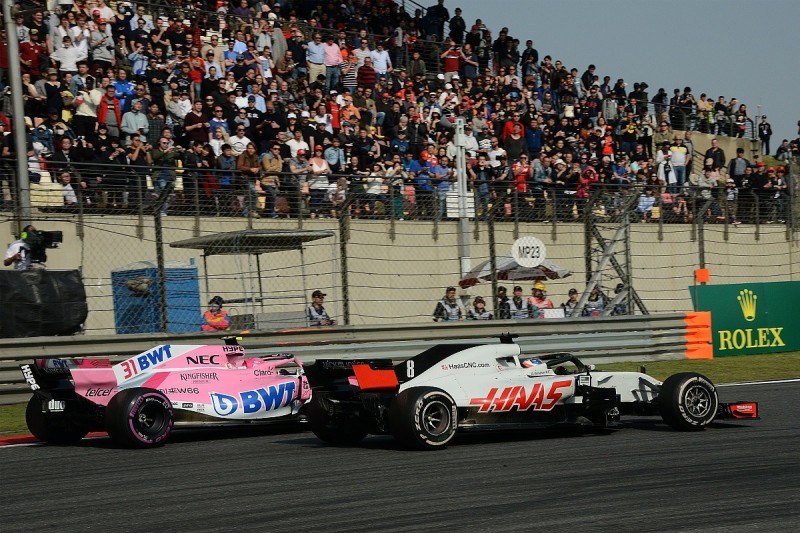 The Haas driver was trying to run to the finish on a one-stop strategy while the Force Indias had pitted for fresh tyres under the safety car.

"We did a very aggressive strategy at the safety car which wasn't necessarily against us," said Fernley.

"We lost time trying to get past Grosjean. Had we been able to do that, I think we would have got into the points.

"It still would have been a 10th place, but the strategy would have worked.

"It proved longer to get past Grosjean than we thought it would."

The first lap delay in China prompted a frustrated radio message from Ocon about Perez, but Fernley said that did not mean tensions between his drivers were increasing again - pointing out that they respected team orders later in the race.

"I don't think there was anything particular in there, it was just a sloppy first lap," he said of the radio exchange.

"It just set them both back. Once you see the video replays you can see where it's all gone wrong and it's one of those things.

"The boys worked really well. We tried to switch them to get a move on to [Kevin] Magnussen.

"We moved Checo [Perez] through on Esteban, and then at the end we swapped them back.

"Everything worked very well from that point of view. The problem is that first lap just hurt us."