Grosjean said it was "absolutely nonsense" that he was handed a five-second time penalty for a clash with Esteban Ocon on the run from the startline to Turn 1 at Paul Ricard.

Using footage of the start from the overhead helicopter camera and Ocon's onboard shown on a large screen, Whiting talked through the incident to clarify why the punishment was handed out.

He said the stewards did not take issue with Grosjean's initial move to the left, even though it squeezed Ocon so the Force India had two wheels beyond the white line on the run-off.

Whiting explained that Grosjean's second move to the left, which initiated contact, made it "fairly clear he just bumped into him".

"That's why the stewards penalised him," Whiting said "He'd moved him over, two of his [Ocon's] wheels were off the track anyway, and then he [Grosjean] just gave him a final little help on his way."

Whiting said he wanted to "make it clear that there is more to it than Romain may have thought". 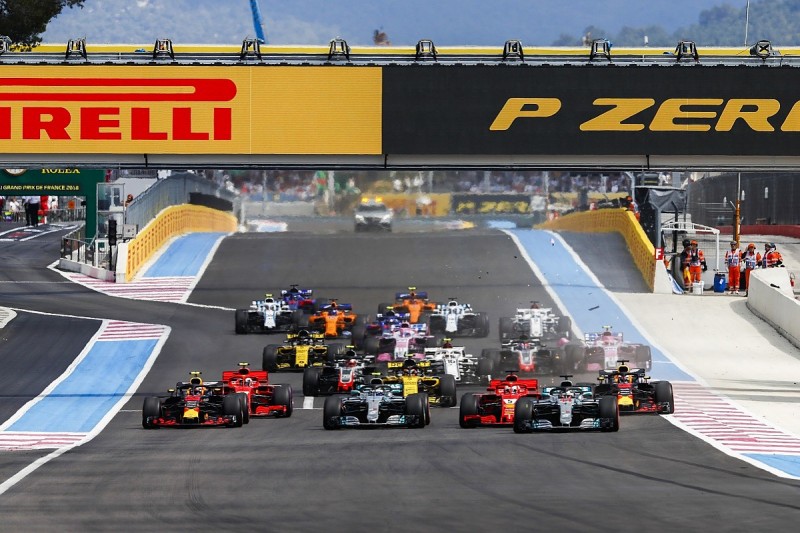 The FIA has pushed for greater transparency in its decision-making processes by making key figures available to the media as well as showing drivers as much material as possible.

If a driver is called to the stewards over an incident post-race they are shown onboard footage used by the stewards to make their decision, but as Grosjean's was an in-race penalty he was not presented with the evidence.

Whiting said: "Romain's made his position clear to you guys without discussing it with us.

"I'd like to point out he didn't come to us after the race to have a chat about it either.

"It would have been good if he'd come to us after the race and said 'Look, I really feel I was harshly dealt with there and could you tell me why?' and we would have shown him footage."

Grosjean claimed he was being pushed to the left by Charles Leclerc, but the footage shows there is clear distance between the Sauber and the Haas.

When Autosport suggested that Grosjean's move to the left appeared an odd and delayed reaction, Whiting replied: "It does. I tend to agree with you there."

Autosport understands the incident was not raised in the drivers' briefing, which followed Whiting's meeting with the media, and therefore the footage was not shown.

Whiting had already indicated that the usual protocol left it down to the drivers to raise issues from the previous race.