The official on the start/finish stand, who carries the title of starter, thought race leader Sebastian Vettel was on his 70th and final lap, and mistakenly asked model Winnie Harlow to wave the flag when the Ferrari driver was actually completing his 69th lap.

Drivers continued to race for the extra lap, despite the fact that at some points on the track marshals were waving multiple flags in the traditional end of race salute.

The situation was treated in the same way as a red flag, and after initially being listed at lap 69 the final result subsequently went back to lap 68. There were no place changes in the top 10, although Daniel Ricciardo lost his fastest lap to Red Bull team-mate Max Verstappen.

"The chequered flag was shown a lap early because of a miscommunication with the guy that they call the starter here, who starts and finishes the races," said Whiting.

"He thought it was the last lap, he asked race control to confirm it, they confirmed it, but they thought he was making a statement when he was asking a question.

Whiting believes that the starter was misled by the TV graphic that notes the lap that the leader is on, rather than laps completed - which is what happened in a similar situation in China in 2014.

"I think people who don't work in F1 are sometimes a little confused by the graphic that they see on the screen where it says 69 out of 70," he said.

"We all know that means we're on lap 69, but someone who let's say is more casual observer thinks 'Oh, this must mean it's the last lap.'

"I think that's where the doubt originates. Obviously we need to do a better job of briefing these people.

"Just a simple miscommunication, a very regrettable one of course.

"You're dealing with a lot of human beings, different countries, different languages, and it's not always absolutely perfect.

"Of course we strive for perfection. Fortunately there was no real harm done, insofar as it didn't affect the result of the race."

Teams told to race on 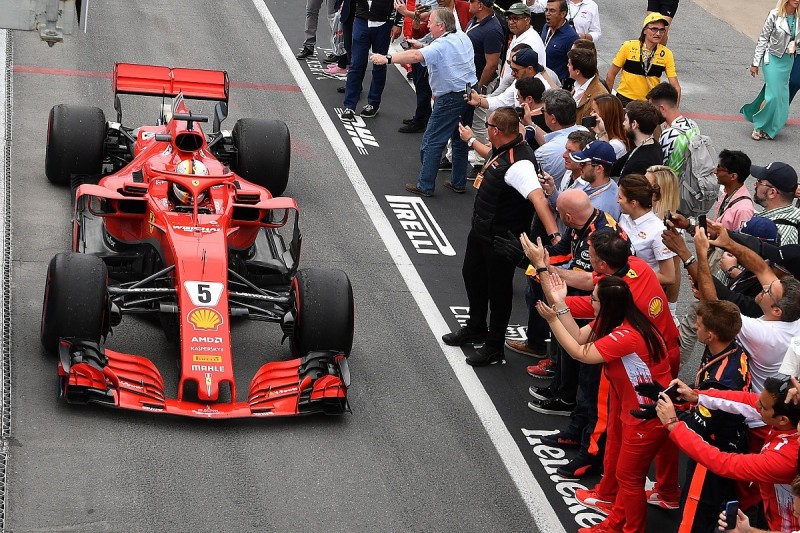 Whiting said when teams asked what they should do after the flag was shown, he told them to race to the end of lap 70.

"It was very clear what had happened," he said.

"Under those circumstances, very few team managers would be absolutely sure that they could tell their driver to back off because that was that.

"My advice to anyone who asked was that they should just complete the race, to be sure."

Whiting acknowledged the situation was further complicated by marshals around the track believing that the race was over.

"This is part of the confusion. Sometimes marshals wave all their flags to congratulate the winner, and some of them were doing that, because they thought the race had finished too," he said.

"Presumably they'd been told that the chequered flag had been shown. But the fact that it had been shown early, they didn't know that of course.

"If all the marshals had started coming on the track when the guys were still racing, which is what I believe happened somewhere else in the past, that's something that if this ever happens again we need to make sure we can take care of that."