Raikkonen was running a comfortable second to Lewis Hamilton's Mercedes in the closing stages of the Silverstone F1 race, when a delamination of the front left soft Pirelli on Raikkonen's Ferrari forced him to make an unscheduled second pitstop.

The problem meant Raikkonen ultimately trailed home third, allowing Valtteri Bottas to complete a one-two result for Mercedes and help Hamilton close to within a point of Sebastian Vettel at the head of the drivers' championship.

Vettel also suffered a front-left tyre failure, which dropped him from fourth to seventh in the race results, while Red Bull had to bring fourth placed finisher Max Verstappen into the pits for a precautionary stop.

Both Vettel and Verstappen complained about blistering on their front tyres in the second half of the race, but Raikkonen said his rubber failed without warning.

"Everything was going more or less normally," Raikkonen explained. "The gap was fine for us. Two laps from the end, I don't know what happened - before Turn 6 [Brooklands], under the tunnel, the tyre didn't explode but the rubber part came off suddenly.

"I don't think I hit anything, everything felt normal before, luckily I came back.

"I struggled a bit after that because the tyre was flapping around, [but] we managed to get a decent position.

"I was very unlucky and, in a way, lucky, but didn't want to see the same happen to Seb and then a lap later - I don't know what happened." 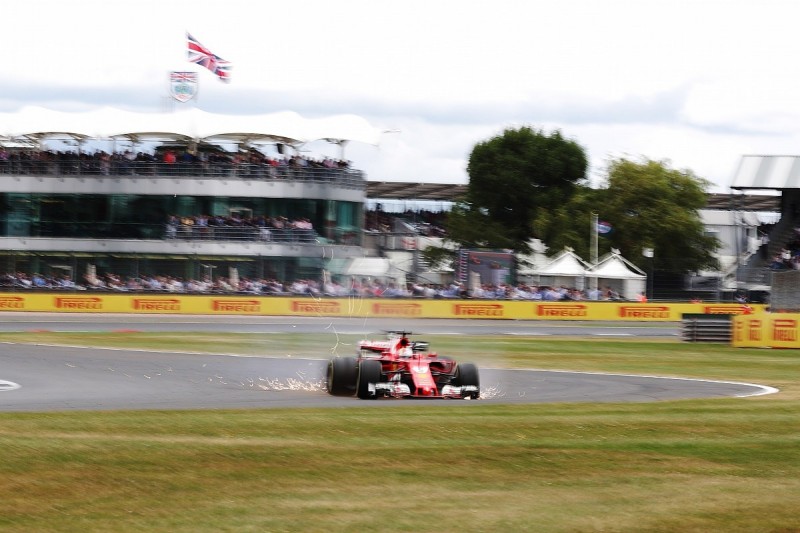 Vettel was holding fourth place behind Bottas when his left front tyre deflated through Brooklands and caused Vettel to run off the track at Luffield.

He tumbled down the order as he limped the Ferrari back to the pits and saw his championship lead almost evaporate completely as he fell outside the top six.

Vettel said the tyre failure also caught him by surprise, despite feeling those vibrations during the second stint.

"I don't think there's anyone particularly to blame," he said. "Hindsight is great, with hindsight it is easy, but at the time it felt OK.

"Kimi had similar issues and his tyres were at least five or six laps fresher, so I think it caught us both by surprise."

Raikkonen spent the entire race in fruitless pursuit of Hamilton and said Ferrari simply lacked the pace to challenge Mercedes properly at Silverstone.

"It wasn't the easiest feeling," Raikkonen added. "We had all weekend a few places that were quite difficult for us and in the race it was similar to Friday.

"I tried to hang on to Lewis, tried to keep the gap, but just didn't have enough speed. We could have been second, but we have some work to be done.

"We had a decent start, but once we fall behind, we had no real chance to beat them."