Ferrari F1 team adamant it hasn't changed engine at all

Ferrari insists that it has changed 'nothing' on its power unit following the latest Formula 1 engine rules technical directives, despite rivals suspecting its straightline speed advantage has been reduced

Rival teams had been querying how Ferrari was achieving its power advantage in recent months, and in the last fortnight the FIA issued technical directives regarding fuel flow rules and the use of liquids as combustion.

Ferrari started on pole for six straight grands prix after the end of the summer break but has not done so at the last two races.

But despite it appearing that Ferrari is no longer as quick on the straights as before, team principal Mattia Binotto is adamant that the shift in performance has nothing to do with its engine.

"No, no, we didn't change nothing [anything]," Binotto said in an interview with Sky.

"What we did is to read carefully the TDs because you need to meet up with whatever is a new technical directive. It's important to understand it.

"But we didn't change our operations, our way of using the engines And that is since the start of the season."

Binotto reiterated that the shift in Ferrari's performance has come from it adopting a higher downforce approach to its car at recent tracks - which has compromised its straightline speed in order to achieve better pace through the corners.

"We've still got an advantage on the straights," he said. "We know since the start of the season that we are lacking downforce and maybe our car is somehow more fast on the straights.

"Since the very start of F1, if you drop your downforce, you get some more speed [on the straights] but you reduce your speed in the cornering. And our car is not as good as the others in cornering.

"That's why on circuits where we need the maximum downforce, like Hungary or the last one [Austin], or even in Mexico, we were lacking certainly speed in cornering.

"But we've got an advantage on the straight simply because we are running, let me say, a low downforce configuration. 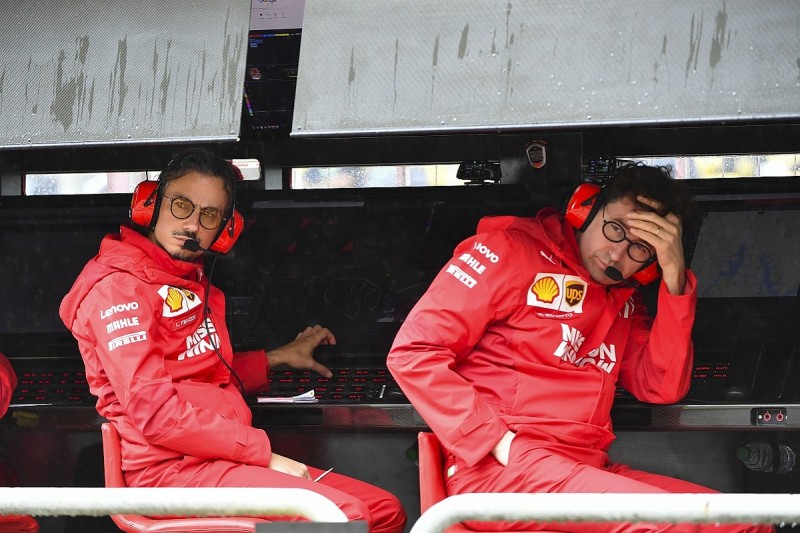 "Now I think in Austin relative to the others we were slightly higher on downforce compared to what is a normal difference you've got.

"So we had less advantage of straights, still some advantage, but then we are gaining more in the corner."

While the speculation about Ferrari has been fuelled by the FIA technical directives, motor racing's governing body is clear that it did not issue the documents because it suspected anyone was cheating.

Instead, it says it was normal procedure for matters to be dealt with this way when approached by teams with questions.

And it pointed out that if there were any suspicions of a team breaking the rules, that team would be reported to the stewards.

The FIA's head of single seater matters Nikolas Tombazis said: "We are happy about people complying. We check people all the time.

"But the truth is that we should never be happy completely, meaning that we need to keep checking.

"We can't always just say everything is fine, because otherwise that means that we stopped working. So we check all the cars all the time, in as much detail as we can.

"When we have any doubts, we ask the teams questions, and if we had any evidence of somebody cheating we will report it to the stewards, and they would have been promptly, you know, disqualified or whatever.

"So I think it is very easy for the media to jump to conclusions about these things, because there's a lot of rumours. But I think we need to keep things in perspective.

"And we need to work as the FIA to police a sport properly and do what we need."

Why F1's 'misleading' tyre graphic is better than you think