Alonso is set for a 30-place grid penalty which means he will start the race from last position.

But with a threat of rain forecast for the race, the McLaren driver is hoping it will give him a chance to come through the field.

Alonso topped Q1 with a slick-tyre lap at the end of the session as the track dried out, and he believes that running could help him if there are changeable conditions in the race.

"We could have made it through with the intermediates but we decided to use slicks to have a reference for tomorrow in case conditions are similar, and we nearly didn't make it," Alonso said.

"But it worked out fine and we have that reference that's useful for tomorrow.

"If it's changing conditions we can be competitive and a bit of chaos would help us."

The Spaniard admitted that, all though irrelevant, seeing McLaren in first place in a qualifying segment for the first time since 2013 was good to see. 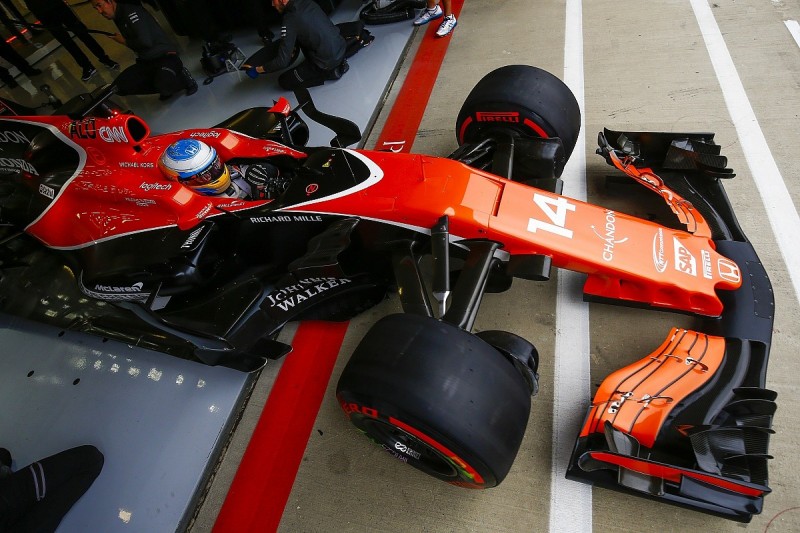 "It was a good moment, and for the fans too because there's McLaren fans here who want to see the team on top as much as we do," he said.

"Even though it was only Q1 everybody on the stands was very excited and it was nice to see."

Alonso finished qualifying in 13th position after failing to make it to Q3, but he said the result was probably better for him than if he had made it into the top 10 in the session.

"In a way we didn't want to make it into Q3 because you start last tomorrow anyway but with used tyres from Q2 [if you qualify in the top 10]," he said.

"At least we start with new tyres and with the compound we want, so P13 is perfect."

The two-time champion was outqualified by team-mate Stoffel Vandoorne for the first time this year, and the Belgian set to start eighth.