Smooth progress past the startline shunt involving Nico Hulkenberg and Carlos Sainz Jr meant Alonso rose from ninth on the grid to fifth by the first corner.

"The start was very good, P5 in the first corner. At one moment I even hoped for a podium position if something happened in front of me," he said.

"Everything went fine, and sometimes you need to get lucky. Sometimes you go from hero to zero and today was a good one.

"I was thinking about the podium because in Singapore some [strange] things can happen."

Although Alonso held off a train of cars in the first stint, he eventually fell to seventh behind Sebastian Vettel's Ferrari and Max Verstappen's Red Bull.

"Seventh was the maximum, the first of the rest after Mercedes, Red Bull and Ferrari," Alonso admitted.

"We were not the fourth-quickest team here.

"Today I think we maximised what we had and next time we can improve." 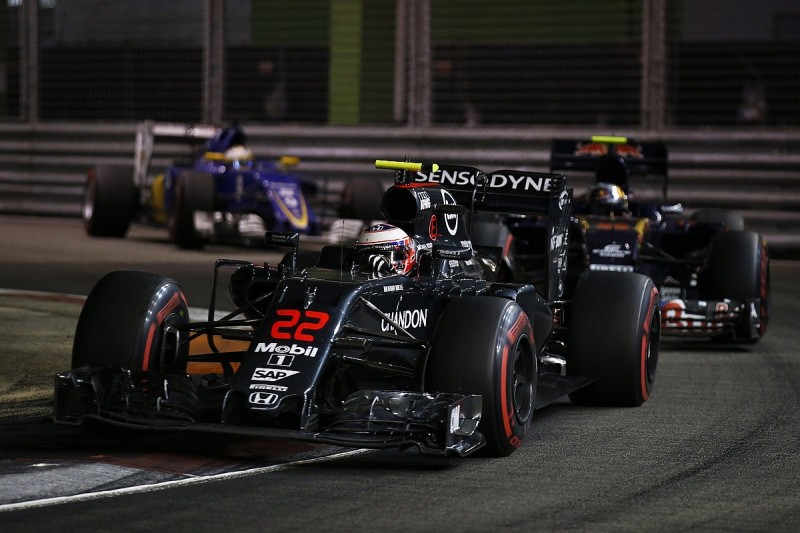 Alonso's team-mate Jenson Button, who ultimately retired with brake damage related to the first-lap crash, was impressed with what the Spaniard achieved.

"I really don't think the car was quick enough to be seventh, but he did a good job and others had problems.

Button's damage was picked up when he clipped Valtteri Bottas as both tried to avoid Hulkenberg's crashing car.

He rejoined with a new nose section but later had to park.

"The whole race the car was damaged," Button explained.

"I was running with a lot less downforce and also the downforce balance was completely wrong.

"The reason we stopped was because of the brakes.

"Even the smallest difference to the brake duct can make a difference and it was quite a big difference."