Ferrari and Mercedes were the first teams to get down to regular work on the opening day in Spain, with Vettel and Bottas trading places at the top of the order on short medium-tyre runs early on.

Bottas then moved ahead with quick laps at the start of two long runs on soft tyres, but Vettel became the first driver into the 1m22s shortly after midday with a 1m22.791s as Ferrari stuck to mediums for its running.

Vettel returned to the track in the final half-hour before lunch for another medium-tyre run, twice missing out on his best time by just one tenth of a second.

Bottas completed 79 laps in the morning compared to Vettel's 62, and will now hand the W08 over to team-mate Lewis Hamilton for the afternoon.

Sergio Perez established Force India as best of the rest in third place with a soft-tyre run just before Vettel set his quickest lap.

While Mercedes and Ferrari got down to serious work immediately, Red Bull managed just four laps before Daniel Ricciardo stopped between Turns 3 and 4 towards the end of the first hour with a "sensor issue", causing the only red flag of the day so far. 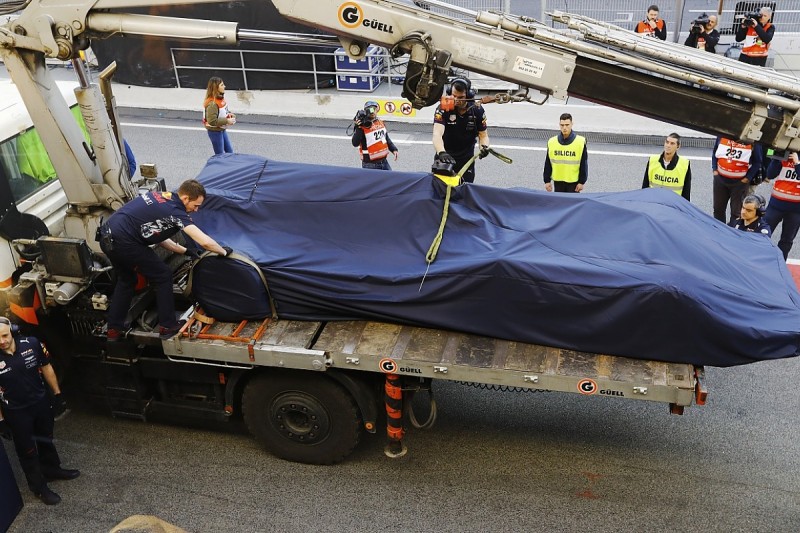 Things were even worse at McLaren, where Fernando Alonso completed just one installation lap before the MCL32 was consigned to the garage with a Honda oil systems problem.

With the troublesome area of the power unit being difficult to access, McLaren predicted the issue would take "several hours" to resolve.

Haas was another team to hit trouble when Kevin Magnussen came to a halt in the pit entry, but fortunately he was far enough out of the way that it avoided the need for a red flag as the team's mechanics retrieved the VF-17.

Fixing the problem took Haas just over an hour, with Magnussen returning to the action to post the seventh-fastest time, leaving him between the Renault of Nico Hulkenberg and Marcus Ericsson's Sauber.

Magnussen then suffered more dramas when he spun into the barriers at Turn 10 just before lunch, damaging the front wing.

However, once again the American team managed to avoid causing a red flag, with Magnussen driving the damaged car back to the pits.

The new Toro Rosso, which caught the eye with some features similar to that of Mercedes at its launch on Sunday, didn't post a time in the hands of Carlos Sainz Jr until after 11am, eventually moving into fifth place behind Felipe Massa's Williams.

Winners and losers from testing day one