Front wing flexing is a topic that's never far from the headlines in Formula 1, and from the Canadian Grand Prix another loophole has been closed by the FIA

This latest rules clarification applies to the front wing flaps that have been clearly deflecting at speed.

Up until now the front wing flap angle has not been subject to a specific test and thus open to differing interpretations by the teams.

It's been evident all season that a number of teams have had deflecting front wing flaps and in a few cases the cascade winglets too.

Clearly due to the huge aero load created by the front wing, it's not practical to make an infinitely stiff wing.

While there's a general prescription of flexible bodywork by the FIA the current rules only apply deflection to the front wing at the endplates to detect droop or twisting of the main wing structure.

But we have seen from the nose-mounted onboard cameras that the flaps flatten out at speed, only to spring back up under braking, as speed and thus the aero load reduces.

This is different from the Abu Dhabi penalty metered out to Red Bull last year, where the front flap adjuster allowed for an extreme amount of flexing, although the wing structure itself was clearly stiff.

Teams are able to tailor the wing's structure to create a deliberate deflection of the flap.

This can be used to alter the car's balance at speed and also to reduce drag, which cannot be achieved with more rigid wings that would require a compromise elsewhere in the car's set-up.

The FIA's most recent technical directive applies a new test. Along the trailing edge of the flap, a 60N load is applied and the wing must deflect no more than 3mm. 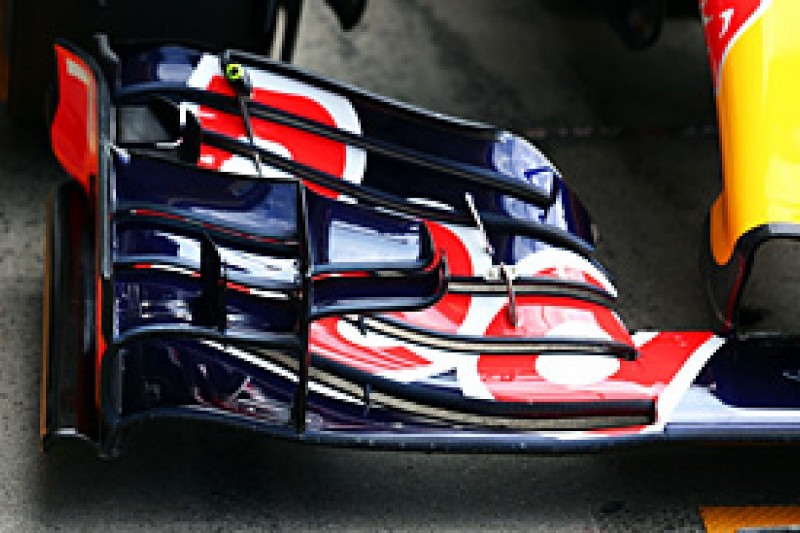 While the 60N load is not significant in relation to the actual wing loadings, this will at least force every team to review its front wing stiffness.

It's hard to imagine any team will be able run its old wings in unmodified form, which is not to say every team has illegal wings, merely they are not designed to accept the point loads that are to be introduced in Canada.

Many teams will introduce low-downforce front wing flaps specifically for Canada anyway, and this FIA change may force some to rush through modified parts for this race.

As with any technical advantage that is countered by new rules, teams may seek to circumvent the specific test with designs to recreate the effect in a different way.

It's possible with the proposed new test being applied to the trailing edge of the flap, a team may instead deflect the leading edge of the wing, closing the slot gap and stalling the wing.

This is not as effective as the flattening of the wing, but - usefully - it's far harder to detect from onboard video or photographs.

When F1 returns to higher downforce circuits, the onboard footage will need to be reviewed to see if the new ruling is effective and the 60N loading is sufficient to prevent teams purposely flexing their front wings.

Although there's an advantage to be gained with these wing designs, it's unlikely the new test will alter the teams' pace relative to each other.

Villeneuve: It’s dangerous for Formula 1 to ask fans for views