Mercedes claimed its first win of the 2018 Formula 1 season last weekend in Azerbaijan, where it brought a special rear wing to handle the Baku circuit's unique demands

Straightline speed is essential on the 2.1km flat-out blast from Turn 16 to Turn 1, but reducing downforce to move towards a low-drag set-up comes at a price through the rest of the lap, which is a more traditional street circuit layout.

The top three teams opted for slightly different solutions in Baku, where Lewis Hamilton snatched victory when team-mate Valtteri Bottas hit debris and suffered a puncture in the closing laps of the race.

Its shallower outer profile creates smaller vortices and less drag, while a serrated strip with the saw-tooth facing rearwards was placed just behind the throat of the wing.

The small vortices this saw-tooth sets up picks up the airflow, making the main plane of the wing perform more consistently when the DRS is opened.

Renault's Carlos Sainz Jr described confidence under braking into Turn 1 as "80%" of a lap in Baku.

Mercedes' solution would have targeted fixing exactly that while running reduced downforce levels because it also helps the airflow reattach faster to the flap section when the DRS is closed.

The team tried something similar in 2016, but this was in the slot-gap area to improve the airflow reattachment on the flap section of a much larger-section rear wing.

The Mercedes drivers were quicker than the Ferraris down the straights, with Hamilton convinced Sebastian Vettel's team went with more downforce. 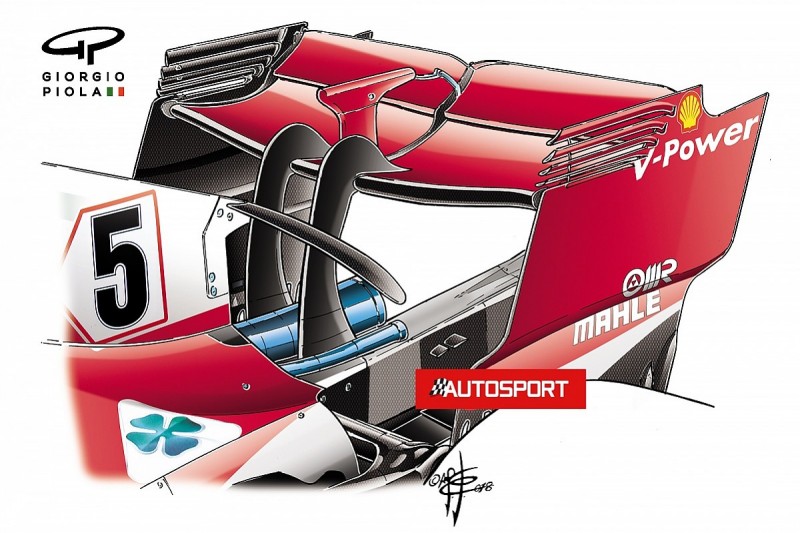 Ferrari's push for a 'pole car' - getting a big enough edge in the long middle sector to outweigh its straightline speed deficit - worked with Vettel leading from the front and only denied victory by the late safety car caused by the Red Bulls hitting each other.

The Ferrari rear wing assembly that ran in Baku is very similar in profile to what it used in the race in 2017, but the mounting pillars were very different.

In 2017, the pillars mounted to the underside of the wing but for 2018 the wing is hung from the pillars.

The airflow on the underside on any racing car wing is the surface that does all the work and having the pillars attach to the wing reduces the surface area.

A small separation just under the leading edge will increase as you go rearwards and you could lose as much as 50mm of underwing surface for each pillar.

Hanging the wing, as Ferrari has done for 2018, means that the airflow can reattach after the trailing edge of the pillars before it starts to accelerate under the wing's surface.

This all means that for the same wing area and profile the actual wing will produce more downforce and be more efficient.

Comparing 2017 to 2018, the monkey seat wing and the high up T-wing are gone - but not forgotten with the introduction of the new droopy T-wing.

This just helps tidy up the airflow to the rear wing, making it work more efficiently. 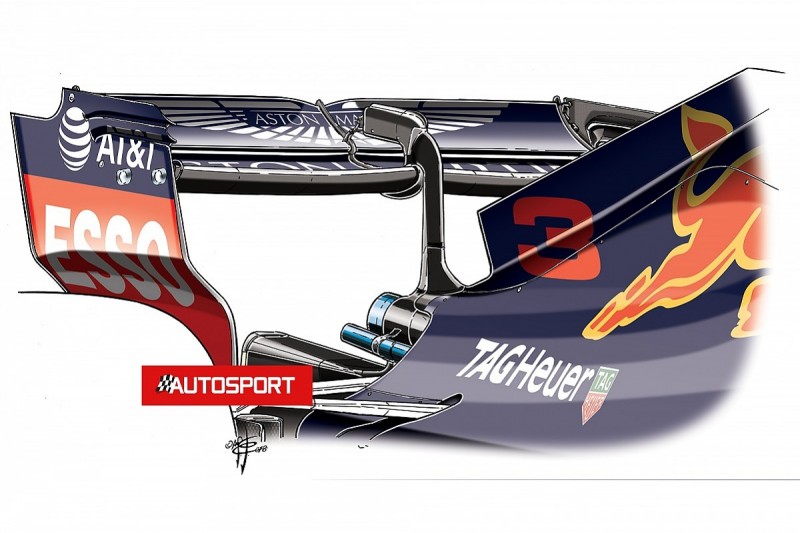 Red Bull and the other Renault-engined teams had to go more aggressive in reducing drag because the French manufacturer still trails Mercedes and Ferrari on engine performance and the Red Bull rear wing was probably the smallest in the Baku pitlane.

Red Bull seems to have a car that is fairly consistent with its downforce, so it is able to run lower downforce levels than most and get away with it.

The rear wing is a little more of a W-shape than Ferrari's, but that's no bad thing. The airflow on the centre section of the wing is the least consistent as it has just fought its way past the driver's head, around the engine cover and then presented itself to the leading edge of the rear wing.

In doing all that it will have lost most of its energy, so it's not good for producing downforce.

As with Ferrari, the mounting sweeps over the wing and hangs it from the upper surface.

This means that there is less disturbance to the airflow on the undersurface so overall the wing assembly ends more efficiently.